I still have a ton of stuff I have yet to read this week so I only got around to reading 6 books from other publishers. It is interesting to me that in six books we encompass Image, IDW, Dark Horse and Dynamite.
Before I jump into the books this week I received my inaction Batman and Robin figures made by Aardman studios, famous for Wallace and Gromit. I have fallen in love with these figures, they are hilarious and absolutely the best collectible I have picked up in a long, long time.  I now find that that normal action figures have less and less appeal to me, but this type of stuff is hilarious. 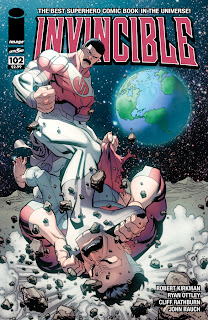 Invincible #102 by Robert Kirkman and Ryan Ottley is still a rock solid and entertaining series even over 100 issues into it. The great thing about an independent book like this is the story has to move forward. Mark is growing older and life events continue to have an impact on what happens in his life. Therefore it just seems to be a natural event when Mark asks Eve to marry him and she says yes. Also within this issue the sub plot that Mark is genetically related to the former ruler of the Viltrum race, which means his father is the hereditary king of their race. The current ruler tries to kill Omni-Man and would have succeeded but for the rest of the people. So now Mark is getting married and essentially a Prince of the Viltrum race. We won’t get a new writer who will wipe away all of this with a deal with the devil.

Highway #4 (of 4) by John Byrne was a fun little mini-series. In many ways I think John made this story too convoluted as who struck who and what the heck was that all about, was too often part of my read of issue #4. It may read better as a trade and was some of John’s best current artwork. 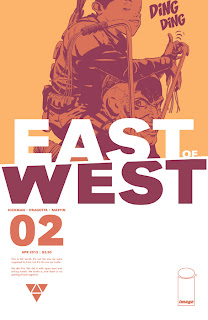 East of West #2 by Jonathan Hickman and Nick Dragotta tasks me. It is a very different book made to feel like a Western. It is an alternative history story with the four horsemen of the Apocalypse as central characters. Hickman has many grandiose ideas and often I feel like we are all suppose to praise him for fear of not being one of the cool kids. The problem with much of Hickman’s work is the investment it takes to get to the point where his epic starts to come together. I will say this that regardless of the huge cast that this issue already is starting to feel like the book is coming together a little bit. At least better then Avengers, which is 10 issues in. I want more then a cool vibe and some neat ideas; I want a story that is cohesive and works when read as episodic chapters. I believe some of Hickman’s best work was his early mini-series where he wrote the story for the last page, but the story was complete and held together. Hickman still intrigues me enough and Draggotta’s art is strong enough to keep me on this book. I’ll give Hickman this much, he has yet to hit that seminal work yet, but most of his stuff has more ideas in it that the majority of the books on the stands.

As I come into the home bend of writing these four posts I find my energy dwindling. Often I write all four parts on Saturday and edit on Sunday. I hate to edit myself, but blog writing on a deadline makes that my only real choice. Plus my writing is often impressions as I’m reading Thursday and Friday, writing Saturday and editing Sunday. All of this is a preamble to why these blurbs seem to get shorter and shorter as the posts progress. Maybe this digression with give me a second wind.

The Answer #4 (of 4) by Mike Norton and Dennis Hopeless was a great book and a horrible ending. Why, a horrible ending because I did not get enough answers. Norton’s slick and clean lines work very well with this fast pace story. We had more rabbits being pulled out of hats per page then most comics do in the span of 12 issues. Devin MacKenzie is the true central character of the book and this issue we find out that she is apparently the only person who can read an ancient code that opens a doorway into another dimension. The Answer dies and reappears again and we get a little glimpse as to the fact that he and another guy have been secretly guarding Devin for a long time. Oh geez just bring on the next mini-series already. 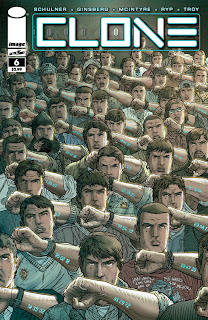 Clone #6 by David Schuler, Aaron Ginsburg and Wade McIntire as writers with Juan Jose Ryp as artist is a very good sci-fi thriller. Luke, the Alpha clone, is trying to escape from his father and the camp of clones to save his wife. With some help he escapes and sends a mad killer (another clone of himself but younger) in the direction of the camp by accident. His wife is being held captive and apparently there is steroid clone Mark at that facility. A lot of plot elements are going on fast and furiously but the book holds together well. At its core is Luke trying to save his wife and child. Ryp’s art is solid as always and goes a long way in making this book work.

And the last book for this week is Mask #6 by Chris Roberson and Dennis Calero. I’m usually a Calero fan, but the characters are hard to tell apart, especially when not wearing masks, and the backgrounds are almost non-existent. It feels like the story is being spread out to be longer by making panels bigger at times for no apparent reason. Still the story at the core of the book has my interests as the pulp heroes are all trying to overthrow a fascist government that has gotten in power in .  At $4 it is an iffy proposition.

That brings us to the conclusion of another exciting week of comics. Join us again next week.
Posted by Jim at Tuesday, April 30, 2013