This week I decided to do more in-depth reviews of a few titles instead of hitting a bunch of books with shorter blurbs or comments. I hate to ever lock myself into a format. Another reason is this was a huge week for me with about 35 titles coming in so there is no way I was going to have everything read in order to do my normal Monday and Tuesday post.

Of course before we jump into the fire we need to briefly speak of next week. The clean and simple list is here, from Cosmic Comics and the detailed listing is here at Midtown Comics. For me the top five books I’m looking forward to the most are Todd The Ugliest Kid, Chew, Wonder Woman, Miniature Jesus and Conan. Looks to be a rather light week and nowhere near as strong as last week but damn if Todd the Ugliest Kid is not the best mini-series so far this year. 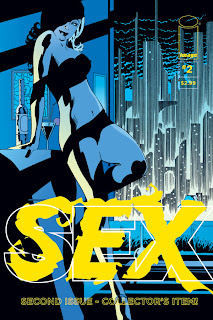 Sex #2 by Joe Casey (writer), Piotr Kowalski (artist) and Brad Simpson (colorist) was a great issue. I like where this series is going and enjoy the tone of the book. The book is laced with titillation (a great word) and skates on being labeled pornographic by many people. In fact if I still had a comic book store I would be leery of how I had it for sale.  As a 50 plus year old heterosexual male nothing in this book is vulgar or degenerate. It is a more open and honest portrayal of sex for some pages then we are used to seeing. Also Joe sprinkles in plenty of sexual undertones in the dialogue. Whether that is 100% intentional or if it is my mindset when I’m reading the book it is an open question. The bottom line; this is a good story and Joe is just pushing the envelope with comics by putting sex front and center as opposed to violence. Why even graphic violence is considered okay, but we all (myself included at times) gasp at sex acts says a lot about American culture and the odd social taboos we have developed.

Annabelle the owner of the sex club Simon visited is Catwoman. This issue we even see in flashback that Simon’s mother (?) Quinn told him that Annabelle was just stealing stuff to get his attention. The repartee between Annabelle and Simon at the club in the start of the book lays the groundwork for what their relationship was and what is yet to be is being determined.

There are some harsh scenes in the book where the old crime lord is sodomizing some girl and then blows her brains out with a gun. We have the hooker being sent to Simon’s penthouse and lots of harder edge moments, but it all give a sense that this comic is going to be “real” with no holds barred. I trust Joe enough to know that he may shock me down the road, but it will be in service of the story and not just to be a jerk and push the envelope for the sake of pushing the envelope.

I’m already drawn into the character of Simon Cooke, as I know he is a Batman riff, but how different is he to Bruce Wayne? Is he sexually repressed? What happened to cause him to quit? Can he run this empire? Will he develop a real relationship with Annabelle? Can he continue to not be a costumed hero? Heck even with all of this I failed to mention the sup plots of what appears to be the Robin analog and other plot points. It is a rich and complex story told in a manner that is both straight forward and coming at you from obtuse angles. The thing is so damn good I’m now reading Godland Volume 1 and have Butcher Baker sitting on my self to be read. Joe Casey has become someone whose work I will seek out at this point.

I don’t want to sell short the art work in the book. Piotr’s line work is clean and light. His story telling is top notch as the book flows and reads very easily. All of his characters are distinct people and are easily told apart. He is adept at showing talking heads, sex scenes, action sequences and everything else. He conveys emotions with body language and facial expressions. His art is on the realistic side, but not the photo realism of the Hitchs’ of the world. He is more akin to a Sean Phillips. The coloring by Brad Simpson is also well done as it is all soft tones way under the super hero palette and a notch about the total noir coloring used on some books. The only quibble I have is the highlighted words on occasion in the word balloons. It is superfluous and adds nothing and is a small distraction while I’m reading the book.

Image right now is producing the majority of the best books on the stands. I can rattle off a bunch of books from Image that I’m enjoying and I’m looking forward to a lot more that are coming out from them. Is this the year Image starts be called one of the big three?