I hadn't been to the Baltimore County Public Library to check out what books they had in some while, but my son enjoyed reading the Hunger Games series so I had taken him to find something new of interest and figured I may as well check out what comics offerings were available.  Having been a reader of the Teen Titans back in the early '80s I remembered lots of ads for and talk about how great the LOSH was then.

Covering issues 284-296 and Annual 1 this Deluxe packaging had a pretty steady creative cast.  Paul Levitz was the writer with Keith Giffen and Larry Mahlstedt combining for most of art work.  The first three issues were done by Pat Broderick and Bruce Patterson.  As it went on Giffen became the penciller and Mahlstedt the inker, though there was some transition with Giffen and Patterson doing the art.  It's a noticeably better artistic presentation when Giffen takes over as the sole penciller.  His is a cleaner, better proportioned style. 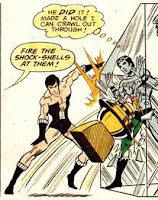 I can't get into the story aspect without first noting that someone's head should have been examined when Cosmic Boy's costume that he wears in the first few issues was created.  It looks like he's just visiting from his primary job as a bondage slave at some outre disco.  How did anyone on the rest of the team take him at all seriously?  Having read Mike Grell's Warlord books around the same time, I can believe he's the one behind the design.  Not one of his better ideas.  At least Cosmic Boy's in something more sane by the time the Annual rolls around. 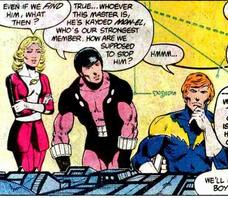 But on to the story.  Calling this a saga is really a packaging trick, which Levitz more or less admits in his introduction.  Books in that era weren't written with arcs clearly delineated as they are now.  Only issues 291-294 and Annual 1 can fairly be considered to be the Darkseid saga that's promised on the cover.  The issues from 284-290 provide some background material, and an exceedingly glacial revival of Darkseid from some centuries long slumber, but have nothing in them that really require them to be a part of this package.  The concluding issues of 295-296 are denouement, but at least they're enjoyable.

When it finally gets into the Darkseid story there's an initial diversion in the Annual that focuses on the revival of Computo, via a young girl who Brianac 5 is treating for some incurable malady.  The effort somehow returns a dormant Computo, with an end result of Computo losing but the little girl being stuck with Computo occupying her body.  It's mostly a device for creating a new Invisible Kid, who's her brother.  I wonder why another Invisible Kid didn't come about sooner after the death of the previous one, as all this one did to get the power was drink some potion.

Anyway, Darkseid is operating through servants who are dark reflections of Superman, Orion, and others.  There's a total of 5 of them, I think.  He engages in some godly magic and transposes Apokolipse, which is a burnt out shell, with Daxam, resulting in his having an entire planet's worth of people who have powers equivalent to Superman under his control.  Of course, as things are looking darkest the LOSH manages to defeat him.

Not that the plot is overly important in this era.  It's the soap opera among the team members that's the big selling point.  New Teen Titans and X-Men were doing the same sort of thing at the time.  I'm probably coloring my memory of the New Teen Titans books with some nostalgia, as I haven't read those in a long time, but I have read Uncanny X-Men much more recently.  The X-Men was much better written under Claremont at that time than what Levitz has here.

Some of it is just the stilted dialog.  Levitz has a double impediment of that being how comics at that time were written, but on top of that he's trying to write for a cast of characters a thousand years in the future, which means he's trying to come up with some futuristic, G rated language that isn't the expletives of today but aren't so alien as to be incomprehensible.  In that regard a near future like Azzarello's Spaceman is a bit easier to write, morphing current language bit into something new but understandable.  Of course, Azzarello's writing for adults and can use adult expletives that flow more naturally from his characters than just about anything that comes out of the LOSH cast.

What I don't get is why anyone liked this cast.  They weep incessantly.  When they're not weeping they're alternately self pitying or exploding in fits of misdirected anger.  Most of the male cast are horse's asses.  Only Blok comes across as someone I would think anyone would want to spend some time.  Maybe Colossal Boy.  Element Lad, Solar Boy, Braniac 5, Wildfire, Lightning Lad, Timber Wolf, Karate Kid, and Star Boy are all jerks.  Only Braniac 5 makes any sense in being presented that way, what with his vast intellectual superiority.  The others are just emotionally stunted, which is weird because they're all adults in their 20s.  Hell, most of them are paired off with female members of the team in some long term relationship, with Lightning Lad and Saturn Girl even being married.  I would have hoped that women a thousand years from 1982 would have better self esteem, especially when they're so obviously capable of so much with their various powers.  Don't even get me started on the weird concept of treason involved with the imprisonment of Chameleon Boy and his daddy issues.

Lightning Lad has a hissy fit and decamps from his role as leader, putting Element Lad in as temporary leader.  He has his own series of whining decisions but still wants the job full time, only to lose the election to Dream Girl.  She doesn't seem to have much to offer beyond not being one of the dumb ass males in the group.  Fortunately she does her job as leader without the complaining that we had throughout the book to that point.  Really, the book would have been considerably better if it just started with the Annual and went through the Darkseid saga and the two additional issues tacked on at the end.  The characters were considerably more tolerable with Dream Girl in the lead and the art was a lot better with Giffen at the helm.
Posted by Thomm at Wednesday, April 17, 2013