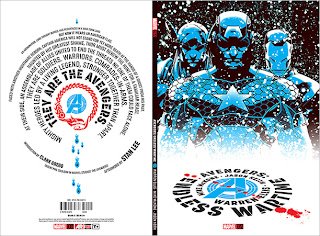 Warren Ellis once wrote a weekly column about comics that always fascinated me, almost as much as his comics did. I remember devouring those articles, being excited when they appeared, and being one of the many responsible for helping Mr. Ellis achieve Internet Jesus status. I have read many different columns about comics over the years, but that one was always my favorite.

I think my favorite part of his columns was how he was always brainstorming wonderful and experimental ideas into making the comics, and the industry of comics, better. Off of the top of my head I remember Mr. Ellis suggesting that comic book stores should grow up and start separating books not by DC and Marvel, but by writer and artist. He had the crazy notion that the industry would grow again (after the shrinking in the 90s) if it just stopped being so resistant to change. He would envision an industry that was taken as seriously as other literary and artistic industries. And I loved that about him.

In retrospect, his ideas were not necessarily as mad now as they seemed then. I remember when he wrote about the industry switching over more from a single/pamphlet type of comic, to a larger graphic novel. With writers and artists turning out works once a year like a band. The singles have not disappeared, but graphic novels still come out, and singles are collected and sold as complete editions quicker now than they were fifteen years ago. At least, I think they are.

I remember how he noted once that even mainstream superhero comics could switch to original graphic novels instead of singles. I liked the idea. I loved his insights into making the industry better, the changes that needed to happen so that the industry should approve, and what he dreamed for the future of comics. Sadly, the industry is always resistant to change.

Nevertheless, Naked Imagination is a new column I will throw up here (hopefully weekly, but I promise nothing you Heathens) to try to talk about what I love about comics now, and what I want to see in the future. I do not claim to have the insight or intellect of Mr. Ellis; regardless, I will try to offer a unique point of view, and maybe even entertain as I do it.

I find it interesting that fifteen years or so ago (give or take a few) Warren Ellis talked about mainstream comics developing an original graphic novel line. Now DC has Earth One, and Marvel is cultivating their own OGN line. One of those books, an Avengers title coming out in the Fall, will be written by Mr. Ellis. It is funny that it took a decade and a half to happen.

This Week: I recommend seeing the movie True Romance. (One of my favorites.) Drink a shot of Jager. Stand under a scalding hot shower. And read the first volume of Transmetropolitan by Warren Ellis and the great Darick Robertson. I'll see you around.