This is the one group that I did not get a chance to read everything. Even though more and more of my dollars are going to this material I find Marvel and DC are usually faster reads and therefore I have a tendency to read them first. 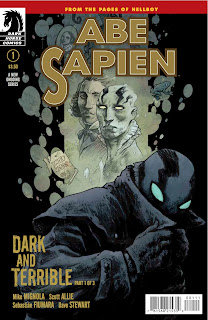 Abe Sapien #1 by Mike Mignola, Scott Allie and Sebastian Fiumara was a great start to the ongoing Abe Sapien series. It is funny because Abe is not sure who or what he is anymore. In all the years of following BPRD it is not been made exactly clear what is Abe. Abe has awaken from a four month coma and left BPRD. They are hot on his heels. Abe is riding the rails and gets an earful of how “Hell on Earth” has occurred. It was sort of a “While you were sleeping” type thing. The art by Sebastian Fiumara was superb. His storytelling and pure craft is top notch. The story itself did not really get started as we were setting the stage for the series. Even with that being the case it was an enjoyable read and a series I will be looking forward to each month.

Snapshot #3 (of 4) by Andy Diggle and Jock was outstanding. The book was an express train of action and plot. It was amazing to pick up the book and just start reading it. By the time this chapter was over you were gasping for air. I can’t wait for the wrap up of this story. The twists and turns this book takes page by page is dazzlingly and makes for a fast paced action/adventure thriller. It is so hard to believe that Diggle had to walk away from Action comics; his work is normally very good. I did not even bother to get his issues since he did not get to finish his story. If that leaves more time for him to do more creator owned stuff, then we are all getting richer for DC’s loss. Andy and Jock are both great creators and this type of story suits them both very well. 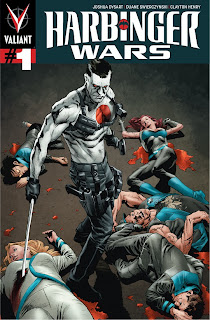 Harbinger Wars #1 by Joshua Dysart, Duane Swierczynski, Clayton Henry and Clayton Crain. It was a great start to the story. I have been following all the Valiant books but thought even if you have not it caught up any new reader. It also gave those of us who knew what came before plenty of new information as it told the story from a different viewpoint. Harbinger Wars is going to involve Harbinger and Bloodshot over four months. It should be a great story and I’m curious to see how this all shakes out and what impact it will have on both ongoing books.

Great Pacific #6 by Joe Casey and Martin Morazzo is still coming together. I want to like the book more then I do, if that makes any sense. There is a lot going on and a lot that has to be explained. That being said the art work is just okay and the story is interesting but not compelling. I’m hanging around for a few more issues as the potential appears to be here for a very good series. 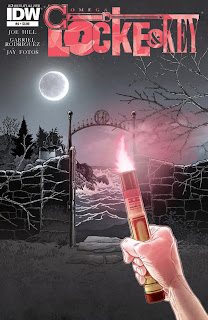 Locke and Key: Omega #4 (of 7) by Joe Hill and Gabriel Rodriguez. This is a 37 part series that was broken out into six parts. We are at the ending of this story. If you have not gotten onboard now it is not worth buying this issue. You should go out and buy Volume 1 of the trade and it is an almost mortal lock you will be back for volume 2. I have loaned my collected editions out to two other people and give the singles to my daughter Gwen. Anyone who reads the book loves it. It has terrific characterization, fantastic cast, a cool horror/fantasy element to it and outstanding artwork. 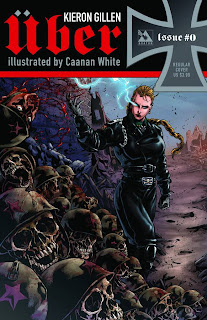 Uber #0 by Kieron Gillen and Caanan White. What a totally different kind of book from Gillen. I’m not a huge fan and recently dropped Young Avengers, but I have not disliked his writing as much as what he has been writing about. Young Avengers and little Loki are not characters that I care about. This was a rough introduction and maybe issue #1 is where they should have started. The book was setting the stage for us by starting with the Battle of Berlin. It did not go the way our history said it went because had the Uber army created, super soldiers.  From here on we are now in an alternative time line. The premise is good, but the presentation of the idea was not. The art is overly dark as the colorist appears to be trying to hide the flaws in the art. The biggest problem is the way the story was being told. We jump feet first into the Battle of Berlin and jump around between Germans, and Russians. At times it was impossible to tell who was who. I’m afraid the first issue may turn off people who could like the book.

The last book that I read of the Alternative publishers is Shadowman #6 by Justin Jordan, Patrick Zircher and Lee Garbett. I’m very sad to see Patrick Zircher leave the book as I love his art and was intrigued enough with his story to stay on the book. I’m enjoying all the Valiant titles and I hate to see what appears to be some sort of internal dissention inside of Valiant. Shadowman along with Archer and Armstrong are the two titles I struggle with getting every issue, but I enjoyed this issue and I’m looking forward to next month’s zero issue.  Still as a stand alone issue I don’t believe it was a good jumping on point, more of a wrap up of the first arc.