I’m only about half-way through my stack of books this week, but I really liked a lot of the ones I've read so far.   So below the jump break you’ll see some comments on six Marvel NOW titles (plus three bonus titles).  I don’t know why these capsule “reviews” get about 50% less page views than my single-issue ones, but sometimes I just don’t have the energy to think about a book too deeply.  It’s been an extra tiring week catching up on work and handling new children pick-up responsibilities, now that my wife has started to work again (part-time) outside the home.  She returned to her SAME employer as a civil engineer (EIT)…16 YEARS later!  Yeah, I know it’s pretty remarkable and we certainly Praise God for this opportunity.  Still it is an adjustment, but I would like to publicly thank her for sacrificially devoting full-time to caring for our six children for so long!!!

In alphabetical order … There could be “SPOILERS!” 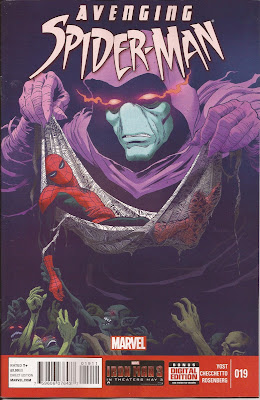 I was glad to see Marco Checchetto back as the artist this time after a one-issue fill-in.   He’s phenomenal and draws the Superior Spider-Man costume better than ANYONE else!  His panel layouts are amazing as well, especially given all the dream-sequences in the story (inventive without being chaotic).  I would also like to acknowledge the outstanding coloring by Rachelle Rosenberg.  It’s a visual feast (subdued and moody) and perfect for whatever story.  And Christopher Yost continues to make this the MUST-READ (Jim!) companion to Dan Slott’s Superior Spider-Man.  I hope this team stays on the title when it changes its name to Superior Spider-Man Team-Up.

The guest-star this time around is Sleepwalker from the 1990’s era (just like Cardiac in the main title).  I never followed his series regularly, but you learn all you need to know as you go along.  The great thing is that Yost makes each team-up important to the larger storyline.  Here Spider-Man is possessed by a Fear Worm and Sleepy has to aid him.  There is some great dialogue between the two as Sleepwalker questions all the Doctor Octopus images in his dreams and Spidey threatens to pound him if he asks him if he’s “okay” again.  Potto® also refers to Sleepwalker as “the alien Muppet creature”, which made me laugh.

In terms of moving the plot forward, we get some more background on Otto’s relationship with his abusive (aren’t they all) father and most significant he’s beginning to wonder about the image he saw/experienced of Peter Parker demanding that he give his body back.  Was it just a dream or something more?  We know of course, but how long until he knows?

I promised myself I wasn’t going to borrow from Jim’s excellent one sentence issue recommendations, but since I know he doesn’t get this title (yet), I think I can safely use it here.

Man, now I want to reread the issue myself. 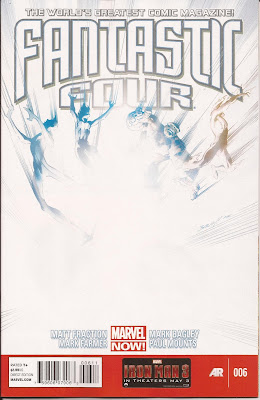 Issue five (or zero-zero-five Thomm!) was the best of the series so far.  This was issue six.  Need I say more?  I suppose I do.  I think the Big Bang Theory (the theory not the TV show, which I’ve yet to see) is pretty hokey (not Hokie) to begin with (no-pun intended), since I believe in the Biblical account of a six-day Creation.  (Thomm, we’ve already gone over this previously, so no point to do it again.)  But seeing Franklin and Valeria give an oral report on it makes it sound even less credible.  This is the second issue in a row where I’ve had to endure this world-view so prominently.  In the #006AU (the Age of Ultron tie-in) Reed tries to comfort his children after his “death” (AU also can stand for Alternative Universe) by telling them there is no God, no Heaven, and no Hell and it only matters what you do and what you do is all that matters (that’s the gist if not verbatim).  “Thanks Dad, I feel much better now!” (Dripping sarcasm font where are you?)

The cool thing about this issue was the surprise appearance of Doomsday Blastarr!  He’s a great villain and there is even a brief moral/ethical discussion within the group on whether or not they should be messing with other people’s prisoners!  IMHO Franklin’s argument made the most sense and he’s like a ten year old!  The mystery of the Thing’s physical problems (headaches and molten lava glow) continues as well.  Not a bad issue, but I disagree with Jim’s assessment that this series has reached the status of some of the classic FF runs.  Not yet.

[Jim gave me permission to use his same format (company policy?), so here it goes...] 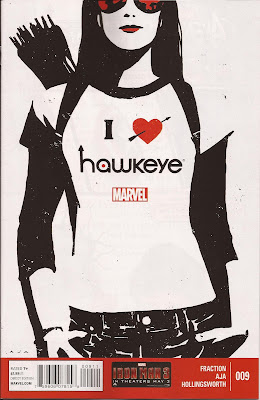 Yikes!  It’s almost 2200 (10:00 pm) on Thursday night and I need to get to bed soon if I want to get at least four hours of sleep before work tomorrow (Fortunately I did have a two-hour recuperative [pass-out] nap this afternoon).

I’ve really been enjoying this series and it’s going for big bucks on eBay already and this issue in particular has already been touted as the Best of the Week by my LCS.  However, despite the incredible cover by David Aja, this issue didn’t feature enough of Kate Bishop (my favorite character in the series).  And I really think I’m starting to get fatigued by the prolonged “I’m a loser Bro” storyline.

The past sex-capades of our purple archer are bordering on the ridiculous and I didn’t even know he had a relationship with Spider-Woman (wasn’t even sure who she was at first).  I keep hearing on the radio that men’s testosterone level starts to drop at age 30.  That must be why all super-heroes are stuck eternally at age 29, so they can be virile enough to mate with any woman they encounter!

Don’t get me wrong, the art is gorgeous and it’s still one of the best series on the stands, I just want it to break out of its unique format once in a while.  And I did not like the ending!

BUY IT! (and sell it on eBay in a few months) 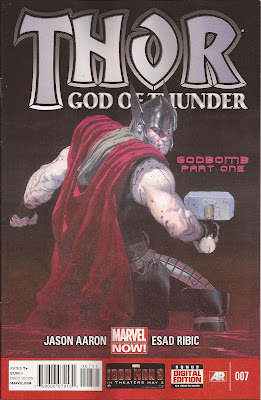 BEST issue of Thor thus-eth far!  It’s called “Godbomb” part one, but really there is no need to call it a new arc.  It’s just continuing the good fight or I should say preparing for the good fight this time.  Aaron and Ribic are doing an outstanding job on this title, building this to be (and I think I can safely say this) one of the classic Thor runs of all time!  Don’t forget the letter page, which Jason answers himself.  It’s a hoot! 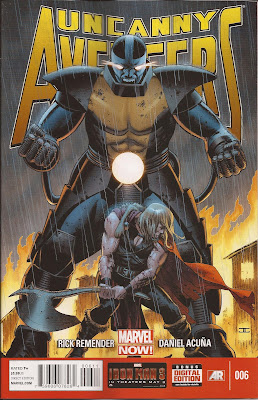 It may say Avengers on the cover, but it was ALL Thor and firmly utilizes the Aaron different era Thor concept.  A real treat and the surprise of the week!

BUY IT if you like Thor, otherwise wait for the trade. 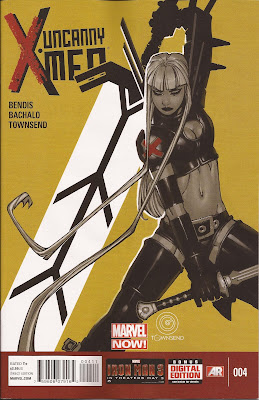 It’s a shame that this one came last in the post, because it may very well have been the best of the week (for me) and I’ve just about run out of time to talk about it.  You see, I’ve just started watching the 2004 Battlestar Galactica series with my son Eric and I really want to watch a couple of episodes tomorrow (Friday) night.  It’s outstanding and I’ve only finished the third episode!  The funny thing is that I can’t stop thinking about how the Guardians of the Galaxy uniforms are so similar to the Colonial uniforms right down to the color scheme.

Loved seeing another point of view of All-New X-Men #010.  Loved the coloring, especially the stipple pattern and the B/W portions. Loved the New Mutants interaction. Loved the intense ending and that they didn’t make us wait to see who else went with them (I won’t spoil that here).  LOVED IT. Period. 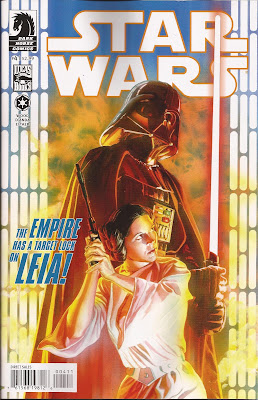 I was disappointed that they stopped offering the free digital copy with this issue.  Actually, my enthusiasm for the book is already starting to wane.  Some of the transitions were confusing too.  I think Brian is tackling too many characters in one issue, so it has a piece-meal feel to it.  I think it still has potential though.

Read it on the stands and if you still like it get the trade or HC. 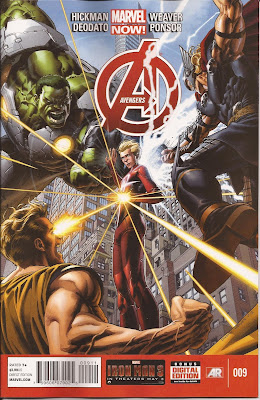 Remember how I much I loved issue #007 with the new origin of Star Brand?  Well, the subsequent issues have not been as good.  Too much plot building and I really can't take the Bull-guy seriously.  Some of the captions had less information than this paragraph.  Maybe if this were on the accelerated All-New X-Men schedule it would read better, but monthly...forget it.

Skip it until Jim tells you otherwise! 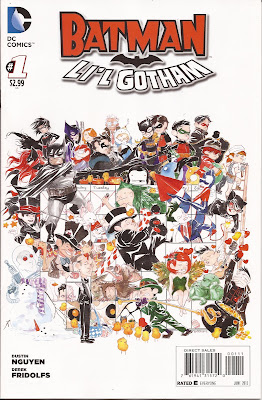 I know this has already been out digitally, but I'd rather read a real book (and sell the digital ones).  Like Smallville and I'm guessing Batman Beyond Unlimited (which I wish I had been buying now that the series is on Netflix), most of the digital first books are much better than the mainstream DC titles.  This book was VERY funny and it reminded me of the old Little Archie comics I loved when I first started collecting.  Plus, it prominently features the late Damion Wayne with all his sass.  It's worth it for that alone.  The art is stylistically gorgeous too.

BUY IT and read it to a child you love (even if you're just rocking them to sleep Grandpa!)