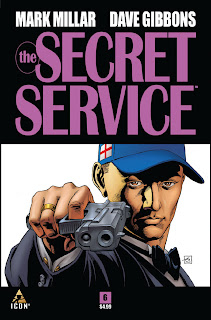 Secret Service #6 (of 6) by Mark Millar and Dave Gibbons is one of the most unoriginal pieces of work I have read in a very long time. Yet it accomplishes what I believe the book is meant to be and that is entertainment. It was entertaining as hell.

First off I believe this book is the end of the Icon Imprint. Meant as a vanity project for some of Marvel’s bigger writers it gave them a creator owned outlet and Marvel just served as publisher of the imprint. Outside of perhaps having the books as part of their catalog I don’t believe Marvel outlaid any money to the creators. I think it was Bendis, Brubaker and Millar as the only people to us Icon. After Brubaker and Phillips took Fatale to Image and it has sold way better then Criminal did under the Icon Imprint, I think the wheels feel off the cart for the Icon label. Now Millar’s next project is coming out under the Image banner and I believe that leaves Bendis with Powers and maybe Scarlet is still being published as Icon’s only books. Image has become the go to publisher and the names being published by Image are a who’s who in comics.

So with all of that, I still enjoyed the crap out of this series. I had forgotten what happened in most of the prior five issues, but as I read it all came back. I think you could pick up this issue and read it on its own and still get a lot of enjoyment out of it. Millar is a master at what many would call low brow entertainment/ I personally enjoy a good well plotted action picture every once in awhile. At least Millar’s stories have a plot, as opposed to some movies I have seen and the dialogue is usually sharp and crisp. Plus he loves making the last person you would think of being a hero into the hero (again the same story as Wanted, except in this one he is a good guy). He will need to be careful in future stories as he needs to provide some level of variety in his stories. I’m thinking Jupiter’s Legacy is going to be very different. We also know Millar is setting up everything he can to be a movie. He is being very smart to make us much money as he can as he builds his own brand. As much as I have loathed reading his stuff at times, I now find that if I take it for what it is, it is good entertainment. I think one thing I read that made me like him as a person was some fan at a signing complained about wasted money to see Kick Ass or maybe wanted and Millar give him a $20 bill to reimburse him for his disappointment. It was a pretty funny and cool move on Millar’s part.

Add into the mix the artwork of Dave Gibbons and even a mediocre story is going to look good. I love Gibbons work and was glad to see him on another project. Gibbons work has a static feel to it that give his work a distinctive style. I give credit to Millar that he only goes after top notch artist. He understands it is a visual medium and great art is going to carry a book even when the story falters.