Today I want to talk about Jennifer Blood Volume 2 and Vol 3, written by Al Ewing, illustrated by Kewbar Baal and Eman Casallos, published by Dynamite. 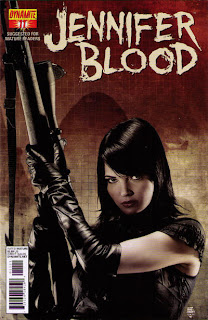 Garth Ennis wrote the first six issue arc to set up the Jennifer Blood series. Very simply, Jennifer was a suburban house wife who trained for years to get vengeance on the men (who just happen to be her uncles) that killed her father. If it sounds like a paint-by-numbers, violent, Punisher light Ennis plot then you know the story. So why would I recommend reading this?

You should read this because it is a MIND BLOWINGLY good series. It is a masterpiece of writing and visual storytelling that is so far above 90% of the books on the stand these days that it’s incredible. What’s even more amazing is that Ewing and company have done it with a throw away Garth Ennis idea. So, now you know this is going to be a positive review. Read on to see why you should be buying this.

The main problem with a concept like Jennifer Blood is what do you do with a vengeance based character once he/she has achieved their goal? Ewing makes the second arc something very special by asking one simple question: “what happens the day after you get your vengeance?” It should be simple right? Everything Jennifer worked towards for years is now complete. All she needs to do is tie up a few loose ends and return to her very normal, suburban housewife life. And things go according to plan until the loose ends start to fray and grow. 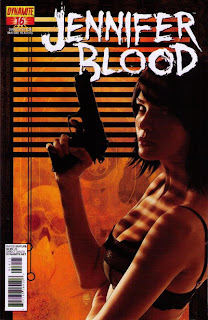 Ewing skips all the obvious clichés that would have made this a waste of time by starting the story 10 minutes after Ennis wrapped his arc up. By making Jennifer exhausted and emotionally empty it’s easy to watch her make little mistake after little mistake. Also, Ewing conveys Jennifer’s inner thoughts via a journal so you can watch her justify all her decisions. It’s an amazing deconstruction of a person slowly disintegrating.

The greatest part is that Ewing makes it all seems so natural. He gives Jennifer a voice that is both likeable (even when she’s killing people) and relatable. There are more than a few points when you find yourself going, “yeah Jennifer, given the situation that is a good idea.” Until you pause for a second and realize that her idea is only going to make things worse. Much worse.

And that’s just the second arc! Ewing manages to make the ending of the second arc seem very natural. Then he starts Vol 3, and just when you were ready to believe that Jennifer was just tired and making bad decisions, Ewing makes you realize that no, in fact, she’s quite the loon. Ewing just builds the story perfectly from, ok that’s a bad decision to omg how do I get off the crazy train because this is wildly out of control. And, as much as you want to turn away, you can’t!

My personal favorite scene is the one in which the husband finally figures out what is going on. It’s a cliché. You know it. I know it. We all know what’s going to happen. And then it doesn’t. In fact, it doesn’t happen for several pages so you doubt you belief in the cliché. And then when something does happen, not only is not what you expect (or what I expected) it’s wwwaaayyyy over the top. The level of crazy in Vol 3 is off the charts.

The art throughout is fine. The figure work is fine but never gets above decent. What is fantastic is the storytelling. The panel-to-panel storytelling is fantastic. The little bits in each scene which carry your eye around the page are as close to perfect as I have seen in a long long time. The visual cues which repeat themselves over and over make for a nigh perfect read.

I know I am gushing but this book really is that good.  In this book, Jennifer Blood goes from a second rate Punisher clone to her own person and it is fantastic to watch. Sure it’s a little violent. Sure it’s got some weird, creepy scenes that will give you the jeebies, but in terms of watching someone mentally crumble it’s great. If you are looking for a book that’s a little violent and a little twisted, and a ton of fun then this is the book for you.

NOTE:  Start with the second trade.  I'm not saying you can't pick up an issue off the stands and enjoy it but you can get so much more if you start at the beginning... which is after Ennis left.