I know this is not officially this week, but the comic shop I deal with sent me a copy of this comic and told me I needed to read this book. Rusty was right. 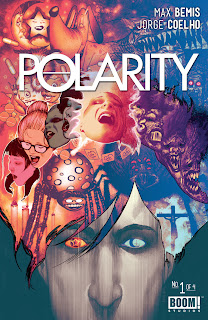 Polarity #1 (of 4) is by Max Bemis and Jorge Coelho and is about a person’s descent into madness.  The writer is the front man for a band called Say Anything, which means nothing to me as I do not stay up to date with bands. I listen to alternative rock and pop stuff, if I like it I’ll do a Shazam capture and download it, but knowing what bands are what, not so much. Why we have had what seems to be a rash of band members wanting to write comics is beyond me. Of course the theory is that we all have at least one good story and this maybe this is the one for Bemis.

First off let’s talk about the art. The art is excellent. Where the heck these companies are finding all of these great artists is beyond me. My guess is that the page rates are getting suppressed to lower and lower numbers because the advent of the internet has people competing for doing the art from anywhere in the world. The style of the art is very nice. I’m currently following Todd The Ugliest Kid and the artwork is similar, while not quite as good. The story telling is great, the art is rich and full of details and every crazy element is pulled off.

Tim goes off his medication and starts to feel empowered again. As the days move forward his descent into madness begins. The inner dialogue we get gives one a sense that on some levels he knows he is going mad and on others he is okay with it. There are great arguments that many artistic masterpieces would have never been if today’s medication was available (Van Gough a prime example).  Tim’s descent includes paranoia and a belief that he can hear other people’s thoughts. The end is a shocking twist that has the reader wondering what is and is not real also.

Reading the back matter Bemis expresses that he struggled with bi-polar disorder and it makes you understand why the book rings so true. I read a book about a woman who suffered from the disease and how her life was until she get her medication right. This story lines up with what she was expressing. I feel bad for people who have the problem because the maniac phase is such an aphrodisiac for them that when they get their medications right, the craving for it still exists. Bemis opening up like this is both an entertaining and education.