Superior Spider-Man #008 and Daredevil: The Man Without Fear #025 – Two Reviews 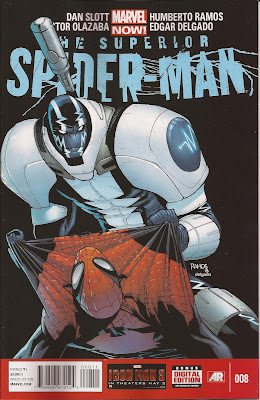 Troubled Mind Part Two: Proof Positive didn’t “WOW” me very much, but honestly it could have just been me.  Reading comics is sometimes like entering the Dagobah Tree, what you find inside is related to what you bring with you.  For me, I was bringing extreme fatigue and was hurrying to finish reading it, so I really didn’t get the opportunity to savor the story.  Still it did have its moments.


Remember how we had the big promise of the Spidey versus Avengers confrontation two issues ago and how the whole thing was delayed for the Cardiac subplot last time?  Well, we jump right into the long-awaited action and it’s over by the FOURTH PANEL!!!  Seriously, I thought Spidey would be much more formidable than that.  His contest was more pathetic than Spider-Girl losing to Spider-Woman in the Cosmic Madness tournament.  They didn’t even fire him ; he’s only on probation.

The Avengers’ conclusion that Potto® wasn’t a Skrull was funny, but asinine at the same time.  And the heart to heart with Black Widow was infuriating.  I LOVED the Avengers movie and the scene where Scarlett Johansson interrogates Loki was brilliant. But the “RED in my ledger” quote is being used way Way WAY too often!  Does Josh Weadon get royalties every time someone uses it?  I hope so.  The doodle bit was clever though.  Ghost-Spidey forces Potto® to leave a picture message indicating that Doc Ock is controlling his mind and she just thinks he draws a “lousy spider”.

Did I mention how the Avengers totally violated all of Spidey’s rights by examining him?  Well, he certainly took advantage of the situation and gathered some stellar data on his body, including a glimpse at a brain wave anomaly.    This leads him to confront Cardiac to get back his Neurolitic Scanner.  The two duke it out in the underground secret hospital, but stop when Spidey realizes that a little girl needs it.  This girl’s medical condition was worsened due to Ock’s Global Warming scheme.  Feeling the guilt, Potto® and Cardiac perform brain surgery on her and become best buds in the process.

In thanks she gives him her favorite stuffed animal, “Mr. Pinky Penguin” and Potto® is truly touched by the gesture.  He also now has his “magic helmet” device and surprise surprise can clearly hear Ghost-Peter.  The best part of the entire issue was this final page and the teaser that he’s going to use the Living Brain (old-fashioned green robot) to perform a “Parker-ectomy”.  If you’ve seen the solicitations, you know it’s not going to end well, because the promos are all saying “Superior No More”.

Has my enthusiasm for this storyline faltered?  Not really, I think I just had an off week.  Three issues in a row and Slott has left us with an outstanding cliffhanger.  That sets expectations really high, and it’s a major feat to deliver month after month.  If this issue was a little “off” and it wasn’t just me, then he’s succeeded in easily 7 out of the last 8, not counting Dying Wish.  That’s really impressive and this storyline is still going into interesting directions and is FAR from over.

Grade B:  Not every issue is a homerun, but this one is easily “double”.  Buy It!  It won’t read as well in collected form.  The episodic rollercoaster ride into the unknown is a blast that can only be fully enjoyed the first time around. Daredevil: The Man Without Fear #025

The book that really excited me this week, despite an unexplained foot swelling malady (gout?) was Daredevil.  It’s amazing that Mark Waid has been turning out stellar issues for over two years now.  Some are better than others, as we witnessed in this week’s Superior, but this one was really really good.  First off, this isn’t part A of Z.  There is no named soon-to-be collected story arc.  It’s just another installment in what will go down as one of the all-time greatest DD runs.

I may be mistaken, but I think this is the first time that Mark and Chris are jointly listed as the storytellers.  Could this be a return to the Marvel method of plot-art-script?  Probably not.  It’s just so well structured.   Still the collaboration is exceptional no matter how they’re accomplishing it.

Daredevil has been approached by a man who has all the answers to the recent attack by people with similar heightened senses.  Matt’s suspicious, but his heart-beat lie-detector checks out.  One nauseating (well it would have been for me) swing ride over to Brooklyn later, and DD tells his informer to get to the hospital.  He’s no dummy and has realized that the guy has been implanted with a pacemaker to fool him (what a cool concept).  Unfortunately, whoever is controlling the guy stops it and his heart.  The four panel senses layout was wonderful where a single image of DD was subdivided to highlight his eyes, ears, nose, and mouth.

After crashing through the skylight of an abandoned warehouse, DD is confronted by a mysterious man, wearing his father’s boxing robe, who actually survived the chemical bath to give him a radar sense too.  He calls himself “Ikari”, which is Japanese for “Fury”.  The costume is outstanding.  It’s an amalgamation of the DD’s original yellow and red suit (my favorite), with boxing tape on the hands and ninja trimmings.  It even has a yellow hoodie over the DD red suit half-mask.  Emblazoned on the black tunic is a “D” like symbol that I assume is the actual Japanese character for the name:  in his hands -- two Kusurigama blades.

The dude is formidable and goes toe-to-toe and hand-to-hand with DD in diverse settings: tightrope wire, fire escape ladder, roof tops, and sporting goods store.  Matt erroneously assumes he’s the better fighter and it consistently upstaged by Ikari.  The ninja-DD even cuts him to the bone on his forearm, leaving him dangling from a fire escape.  Waid uses this almost blackout moment to insert a Stick flashback (haven’t seen him in years).  When DD comes to, he turns the tables by making his billy club into a Bo staff.  Ikari shatters it.

Now weaponless, Matt leads him to a place where he can dampen his radar sense.  Inside the store, he sets of the sprinklers and crouches behind some boxes waiting for a chance to reach for a baseball bat and strike during the confusion.  I won’t give away the AWESOME sequence that follows, but it doesn’t go as planned.

Grade A+:  The pacing is phenomenal and the story is intense.  I don’t know who the mastermind is behind all of DD’s troubles (it can’t be the Kingpin or Bullseye – too obvious), but I can’t wait to find out, even if it takes another two years.

Buy It and keep it forever!

There’s more I could comment on like how Captain America put me to sleep and that Wolverine and the X-Men was actually a worthwhile AU tie-in.  Age of Ultron #006 was the best issue to date (at least the scenes in the past) and Nova was flat-out fun.  A great week for comics and I hope you all have a good and RESTFUL weekend! 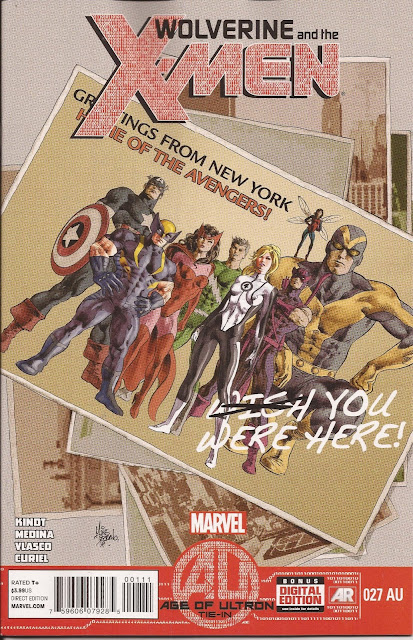