So I finally sat down and read everything from the New Valiant Universe. Some of it was good. Some of it was not so good but none of it is what I would call bad.  In terms of consistency, Valiant has the strongest group of books of any publisher right now.  Yes I know they only have five titles, but for a small publisher it's still quite the achievement.  Now, on to what I thought... 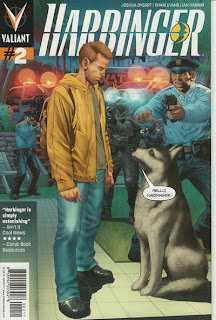 HARBINGER #1-8 written by Joshua Dysart, illustrated by Khari Evans, Phil Briones, Barry Kitson, and Lee Garbett, published by Valiant.
The Good: Everything. Seriously, this has been one of the best series that I have read all year. It is amazing. It’s full of great characterization, solid pacing, and plenty of action. You can read my long review here.
The Not-so-good: I’m afraid the series will eventually crash and burn. But other than me not wanting it to end, there’s nothing wrong.

The Conclusion: This is absolutely one of the best books on the stands today. It’s fantastic. 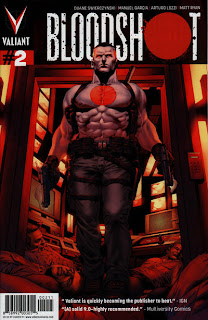 BLOODSHOT 1-7, written by Duane Sweirczynski, art by Manuel Garcia
The Good: Sweirczynski is doing a great super soldier who lost his memory. It’s got plenty of action, solid characterization and supporting cast, pretty good art, and world building tie-ins to Harbinger.  I think Sweirczynski pacing is what keeps me coming back.  He keeps dangling just enough hints and tips as to Bloodshot's secret that I want to learn more.
The Not-so-good: There have been a couple of plot holes that Sweirczynski missed in one issue that got filled in on the next one. Since I self-traded the series it didn’t bother me, but 30 days apart it might have been annoying. And, occasionally, I am required to just “go with it” because the story moves fast.

The Conclusion: Even with some hiccups along the way, I have really enjoyed this. It ties in nicely with Harbinger and Sweirczynski’s done a great job of making me want to see what’s going to happen next. 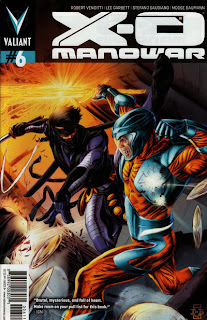 X-O MANOWAR 1-10, written by Robert Venditti, art by Cary Nord, Lee Garbett, Trevor Hairsine
The Good: I’ve enjoyed this series because it’s what I call a summer-blockbuster series. This is all about the event and build-up to the next big action sequence.  It’s fun in a mindless way that doesn’t require any deep thought.
The Not-so-good: The development of the supporting cast has been weak and the overall story has been moving at a snail’s pace. The series started slow with the origin dragged out over 4 issues. After 10 issues I would expect the characters and their motivations to be better developed. The issues seem to alternate between all action and all plot movement. Finally, there aren’t many subplots. Normally this isn’t a problem but it makes the story almost too linear. First he get the armor, then he returned to earth and battled an earth villain, then he headed off to space to fight the big bad. Unfortunately, the lack of a continued subplots makes it easy to leave the book.

The Conclusion: It’s fine. If you like lots of action then you will enjoy the book. 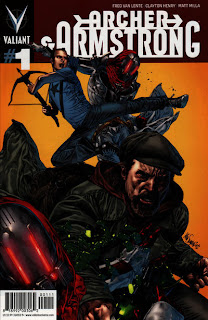 ARCHER AND ARMSTRONG 1-6, written by Fred Van Lente, art by Clayton Henry, Emanuela Lupacchino
The Good: The opening arc (issues 1-4) was a fun, buddies-on-a-road-trip story. There was good characterization, plenty of action, and lots of loose ends that can lead to future plot lines.
The Not-so-good: I’m not sure that I care about the characters. Issues 5-6 introduced the new Geomancer and the Eternal Warrior which was a well-executed story. I can’t say anything was wrong because there wasn’t but I never connected with the characters.

The Conclusion: It’s a solid, paint-by-numbers superhero buddy book. If you have an affinity for the original characters you’ll enjoy it. If not, it’ll be fine. 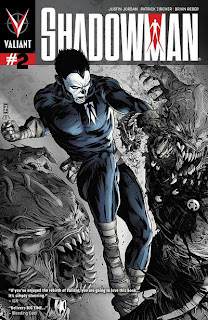 SHADOWMAN 1-4, written by Justin Jordan, art by Patrick Zircher
The Good: The opening arc was pure setup. It was the origin of the new Shadowman including details of his new powers, introducing the supporting cast, and setting up subplots for future storylines. As an origin arc it was pretty good.
The Not-so-good: Personally, I’m not a huge mystical superhero fan. I prefer my magic heroes to be more Constantine-slight-of-hand and not Dr.-Strange-big-fireworks-displays. This isn’t a concept that I normally read so I wasn’t moved.

The Conclusion: Much like A/A before, there’s nothing wrong with this book. It’s well executed and if you have an affinity for the original character you’ll enjoy it. If not, it’ll be a fine.


So, overall I have to say the new Valiant Universe has been a success. Even though there are a couple of books I’m not thrilled with, there’s really nothing wrong with them. But, Harbinger and Bloodshot are both solid home runs and highly enjoyable.