How did I manage to get to LSH covers this week?  I have no clue.  Something must have made me think of them.  I started reading LSH during the Great Darkness Saga but apparently there were good stories before then.  I don't know if any of these books have good stories but they have pretty covers! 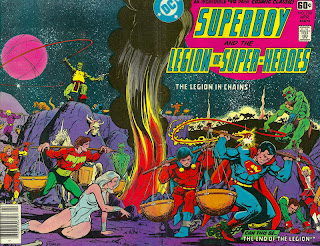 Superboy and the Legion of Super-Heroes #238, April 1978
Pencils/inks: Jim Starlin
I love the cover but I hate the bait/switch that gets pulled on the inside.  This has Curt Swan art which is good but it isn't the same as Jim Starlin. 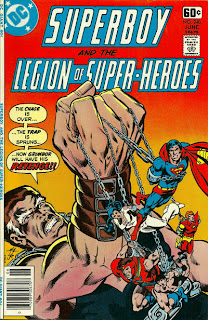 Superboy and the Legion of Super-Heroes #240, June 1978
Pencils: Mike Grell
Inks: Joe Rubinstein
After the bait-switch of the Starlin cover I decided to check the insides.  In this case we have pencils by Howard Chaykin (layouts) with inks/finishes by Bob Wiacek.  Now that is a heck of a team.  This could be worth looking for in back issues.  I know I'll get a complete story and good art. 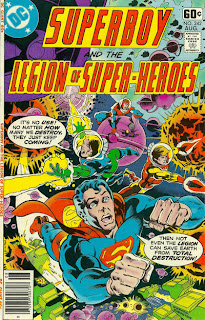 Superboy and the Legion of Super-Heroes #242, August 1978
Pencils: James Sherman
Inks: Joe Rubinstein
Sherman is one of the beloved LSH artists from back in the day.  I wasn't a LSH fan so I didn't know about him.  But from the random issues I have picked up since, and this cover, he looks great. 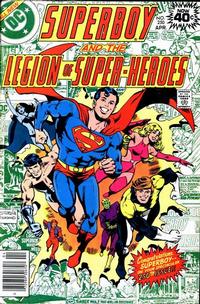 Superboy and the Legion of Super-Heroes #250, April 1979
Pencils: Joe Staton
Inks: Dick Giordano
Now this is what I am talking about.  Check out the interior credits, Script: Jim Starlin [as Steve Apollo] (plot); Paul Levitz (script)
You have a great Staton cover and great team on the inside.  This could be another back issue worth hunting for.  The only problem... I've never actually seen it in a long box. 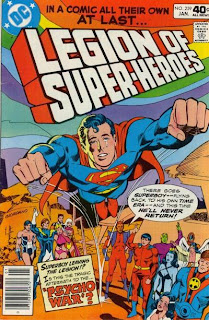 Legion of Super-Heroes #259, January1980
Pencils/inks: Dick Giordano
And eventually, Superboy left the LSH.  What strikes me most about this cover... the rainbow in the background.  It's really kinda weird.

That's all for this week.  Now go watch some baseball.   It's that time of year ya know.