Before Watchmen the Series Reviewed

After reading the entire Valiant Universe, I decided to keep up the good work and read most of Before Watchmen. I basically read everything not written by someone named Azzarello which left me with DR MANHATTAN, NITE OWL, MINUTEMEN, SILK SPECTRE, MOLOCH, and the DOLLAR BILL One-shot.

Since I am an art guy, let’s talk about the art in general. There are a bunch of different artists and a bunch of different styles but I can talk about them all at once because they were all incredible. The best, of an already very good bunch were Adam Hughes and Amanda Conner. Adam Hughes on reminds me of how good a story teller he was and Amanda Conner, of all the artist, kept to the original 9 panel grid layout.

As for the stories themselves… well none were bad. How’s that? 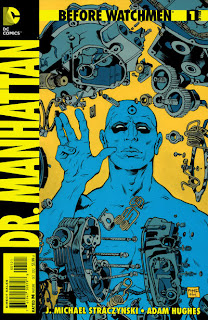 DR MANHATTAN #1-4 written by J. Michael Straczynski, art by Adam Hughes
Briefly: Because Dr. M can see all things at literally all times so he travels back in time to see his own creation. In so doing he causes the time line to branch. Now he has to fix it.
The Good: Straczynski goes all out with a story revolving around Schrödinger's cat (see here if you aren’t familiar with the concept). Because Dr. M is so powerful it makes perfect sense and as long as you don’t linger on the science too long it’s great.
The Not-so-good: Nothing really.

The Conclusion: This is a solid, superhero, science fiction story that you will enjoy. 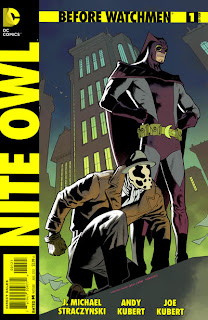 NITE OWL 1-4, written by J. Michael Straczynski, art by Andy Kubert
Briefly: Nite Owl starts his career and falls in love.
The Good: Since I already mentioned the art all I can say is that it’s well executed.
The Not-so-good: It’s dull. It’s a long extended origin story and if I swapped Nite Owl and his love interest with Batman and Catwoman it would be the exact same thing.

The Conclusion: It’s a fine superhero book. You won’t feel cheated reading it but you won’t remember it in 6 months either. 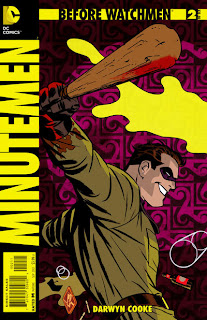 MINUTEMEN 1-6, written/illustrated by Darwyn Cooke
Briefly: You thought the Watchmen were grim, gritty, and a bunch of messed up heroes? You haven’t read anything yet because the Minutemen are even worse!
The Good: It’s pretty to look at and the story is fine.
The Not-so-good: This reads just like my synopsis says. It feels like Cooke isn’t trying to tell a story as much as make the Minutemen heroes even more messed up as people than the Watchmen were. There are too many scenes that felt like “oohhhh look at this SHOCKING turn of events” or “See, look here, the Comedian is even worse than you thought he was.”

The Conclusion: If you like stories where the good people caught in really bad situations then you will like it. For me, it was too forced and driven by ‘shocking event’ after ‘shocking event’ and not real characterization. 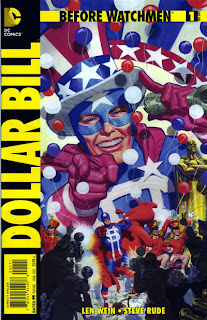 MOLOCH 1-2, written by J. Michael Straczynski, art by Eduardo Risso
DOLLAR BILL One-shot written by Len Wein, art by Steve Rude
Briefly: The origin stories of characters long dead in the original Watchmen series.
The Good: They are certainly well executed.
The Not-so-good: I couldn’t get past the fact that there was no real reason for these books to exist. Dollar Bill is the better of the two but, like the Titanic movie, we all know how it ends. Moloch was 2 issues of ‘ooohhhh, look at how bad he is.’ In fact, the whole point of Moloch was summed up in 5-10 pages in the second issue when he figures out that Ozman gave him cancer. If that was the point of the series (and it was) then it could have been done in one issue.

The Conclusion: These are fine books. Because they are C-list Watchmen characters, you might feel cheated and again you won’t remember it in 6 months either. 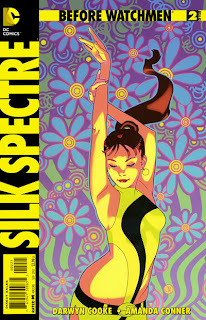 SILK SPECTRE 1-4, written by Darwyn Cooke, art by Amanda Conner
Briefly: Laurie, sick of over bearing mother, runs away to San Francisco to be with the boy she loves. She grows up and figures out that she loves being a superhero.
The Good: This is a fantastic story about a girl growing up as both a person and a superhero. It’s great and when the twist comes at the end (and it’s a Watchmen book so no one can be happy) it’s all the more heartbreaking.
The Not-so-good: The series is over. Not that this could have been an on going series but this was good enough to make me want to read more about Laurie.

The Conclusion: Just fantastic and well worth your time to read.

Overall I have to say Before Watchmen is a mixed bag. The art in every book is amazing and worth the pricve of admission.  As for the series themselves, they are fine and well executed.  In fact, a couple of them were great.  But I couldn't help feel that some of the other books were just money grabs to squeeze a few more pennies out of a franchise.  The trades, all the BW series collected in 2 large books, have been listed in Previews but there isn't enough here to make me get them.