Lee: I was gonna pick everything and let Thomm comment first, wondering why I picked the things I did. But then I couldn’t stop myself from talking (no surprise) and filled in the comments anyway. Except for Lazarus… because we’re all gonna love it anyway.
Thomm: Of course I’m safe from the silent treatment. I never had a doubt. 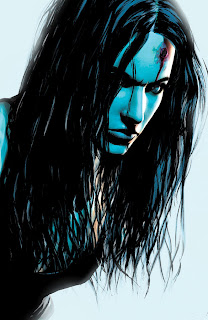 LAZARUS #1
story Greg Rucka
art/cover Michael Lark
32 Pages / FC / $2.99
In a dystopian near-future, government is a quaint concept, resources are coveted, and possession is 100% of the law. A handful of Families rule, jealously guarding what they have and exploiting the Waste who struggle to survive in their domains. Forever Carlyle defends her family's holdings through deception and force as their protector, their Lazarus. Shot dead defending the family home, Forever's day goes downhill from there...
Thomm: I don’t know anything about Lark but that’s some cover. Of course, just about anything Rucka writes is worth reading, so this is an easy pick.
Lee: Michael Lark is an AWESOME artist.  He did the early issues of Gotham Centrol, Terminal City, and Scene of the Crime.  He's been around a long time and knows his stuff.  This really is an easy pick. 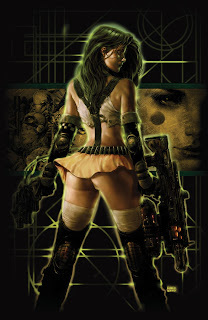 APHRODITE IX: RELOADED, VOL 1 HC
story Matt Hawkins, David Wohl, and David Finch
art / cover David Finch
160 Pages / FC / $99.99
The Original Series As You Never Read It Before! Re-imagining and re-collecting the complete, original Aphrodite IX series drawn by superstar artist David Finch, this trade has been completely rescripted, rebooted, and updated in celebration to for her new Aphrodite IX ongoing series. Only 500 copies of this glorious, oversized hardcover will be produced!
A beautiful female assassin's memory is purged after every hit to protect her and her masters. As she becomes self-aware, Aphrodite begins to surpass her programming to rebel against those who use her.
Lee: I think this should read “The original series as no one has ever read before.” I don’t think I know anyone who’s actually read this. Or anyone that would admit to it!
Thomm: Even without the $100 price tag this doesn’t appeal to me. Beautiful tool overcomes programming of evil masters. Besides, if I read this in its original format, why would I want this HC that is being described as something totally new and different? 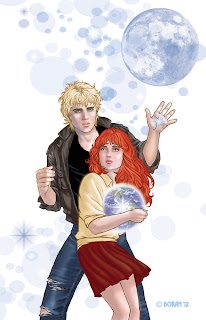 A DISTANT SOIL, VOL. 1: THE GATHERING TP
story / art / cover Colleen Doran
240 Pages / BW / $16.99
The first new edition of the out of print A Distant Soil, Vol. 1 collection returns in a spectacular, digitally re-mastered volume! This beautiful and critically acclaimed series has not had a new edition in seventeen years. Now, digital technology allows us to bring you a more beautiful presentation than ever before.
Every single page has been completely restored, and re-lettered, with a new and stunning die cut cover! This is The Definitive Version fans have been waiting for!
Lee: This is another one of those indie cult hits that people seem to love. There’s always been a buzz around this series but I’ve never actually picked it up. Maybe now is the time.
Thomm: It does look nice, too. And unlike the previous collection, it’s being touted as a faithful reproduction of the original. I’m seriously considering this one. 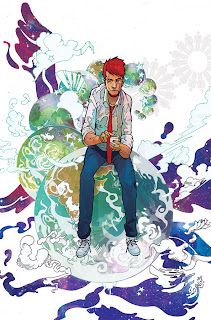 INFINITE VACATION HC
story Nick Spencer
art / cover Christian Ward
192 PAGES / FC / $24.99
Deluxe Oversized Hardcover. Welcome to the Infinite Vacation, where alternate realities are up for sale, and buying and trading your way through unlimited variations of yourself is as commonplace as checking your e-mail. At long last the brilliant and beautiful series that turned alternate realities on its ear, collected together for the first time in a beautiful, lavish, oversized hardcover. All five issues, plus extras – and a five-page fold-out suitable for framing.
Lee: I ordered it. I don’t know why but I did. I know the last issue was months and months late but before that killed all the momentum I seem to remember people liking this.
Thomm: You remember people liking this but not whether you liked it, or did you not get the singles but are just recounting what happened with the delay? Anyway, let me know how it reads. I’m not sure why this turns alternate reality stories on their ear. 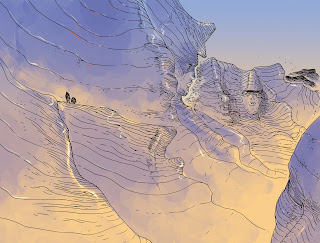 PROPHET, VOL. 2: BROTHERS TP
story Brandon Graham and Simon Roy
art Simon Roy, Farel Dalrymple, Giannis Milonogiannis and Brandon Graham
cover Giannis Milonogiannis
172 Pages / FC / $14.99
The distant future war continues, Old man Prophet is awake now and searching across the universe for old allies that have survived the centuries since the last war. Collects Prophet #27-32
Lee: The best description for this I’ve seen is: Conan in Space. It’s way more complex than that and well worth your time. I can’t wait to get this.
Thomm: Sure does have a lot of artists listed for only 6 issues. I don’t know anything about this book. To me the promo should have provided more information on what this is all about. 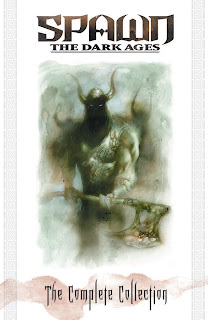 SPAWN: THE DARK AGES COMPLETE COLLECTION HC
story Brian Holguin and Steve Niles
art Liam Mccormack-Sharp, Nat Jones, Kevin Conrad, Chance Wolf and Jonathan Glapion
700 Pages / FC / $59.99
Spawn: The Dark Ages Complete Collection reprints the journey of Lord Covenant, a 12th Century knight killed in a holy crusade far from his homeland, who returns to Earth as a HellSpawn. As a plague of violence and turmoil cover the English countryside, the Dark Knight must choose whether to align himself with the innocent inhabitants of the once-thriving kingdom or with the malevolent forces of evil and corruption. Featuring behind-the-scenes bonus art and cover gallery, Spawn: The Dark Ages Complete Collection is the first time the series will be collected in hardcover, oversized format.  Collects Spawn: The Dark Ages #1-28
Lee: A lot of “who asked for this?” this month. I know the first 10-15 issues look gorgeous with Sharp and Jones on art. I have no idea what the later issues look like. Nor do I have any idea about the story. But, all things considered it’s not a bad price for the number of pages here. Still don’t think I’ll get it though.
Thomm: I’ve read a bit of Spawn over the years and never felt any real affinity for it. A medieval setting is a plus for me, but not plus enough. 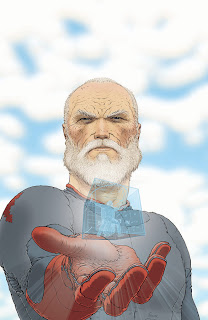 JUPITER'S LEGACY #2
story Mark Millar
art / cover A Frank Quitely
cover B Bryan Hitch  cover C Jock
32 Pages / FC / $2.99
The comic book event of 2013 continues as the schism between the superheroes widens and a plot to unseat the greatest hero of them all emerges. Celebrate the 75th anniversary of Superman this month by buying this frankly much-more interesting book by superstar creators Mark Millar and Frank Quitely.
Lee: How did I miss this last month? I have no idea what it’s about but if anyone can make it interesting it’s Millar and Quitely. I’m trade waiting because I want Quitely’s art in a fancy hc.
Thomm: I’m getting this. Hell, I’d get it just for the smack talk in the promo. Between knocking the poor quality of Superman as it’s currently published and touting itself as the event of the year only 2 issues in, this is a ballsy piece of work. And, of course, there’ the Quitely art.

Thomm: Get out and get the first issue of Jupiter’s Legacy now while it’s on the stands. Don’t wait around for fancy productions like Lee does. As it is you’ll have to wait for the first issue of Lazarus.
Lee:  Yeah, do what Thomm says and support the book a whole lot so I get an even fancier hc edition!!
Posted by Lee at Wednesday, April 24, 2013