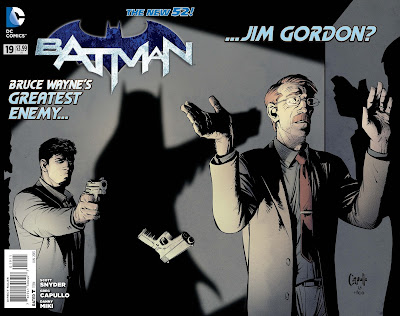 To round out the week I wanted to give my opinion on Batman #19 by Scott Snyder and Greg Capullo. I love this book, yet it is not as good as I want it to be.

The Court of Owls stuff was decent, but the whole Thomas Wayne angle felt as though Scott was going for the big change, then backed off on it at the end. Personally I did not like Bruce having a new brother added to continuity, but what the heck, odder things have been done. Also this is the New 52 and continuity has been lost to the ether. The Court of Owls story inside of the Batman comic alone was well done. The problems I had outside of the brother for Bruce was the fact that Batman never knew about this organization and that he used an almost Iron Man type armor to have to win the day. It felt too “unBatman” like for me.

The next major arc was the Death of the Family. I thought the overall story again went too far. The Joker was doing so many things and set up such an elaborate plan that if felt like we lost that believability envelope that all comics are wrapped in. Perhaps upon a re-read with just the Batman book itself it will be better. A comic can have all sorts of madness, but there are still lines and I thought the book crossed the line. The actual consequence was also very, very tame and lame as hell. I mean everyone had a hissy fit and got mad at Bruce because he had a secret. WTF, Batman had secrets. That is not a shock. Batman not telling his associates everything is the way he operates. Again it felt like Scott was going for something bigger and then pulled back.

As for the art, Greg Capullo was a choice I was a little worried about because his Spawn was outrageous and felt like not the right fit for Batman. I was dead wrong, his Batman work is fantastic. Also he is producing almost every issue of the book. It has none of these five pages done by someone else or the rotating artists’ game. Capullo’s run has been nothing short of astounding so far and I look forward to more of it over the coming months. Heck this maybe the last book standing for me from DC.

Now getting back to Scott, his Detective Comics run was one of the best Batman stories done in a long time. Morrison’s and Snyder’s Batman have given us some of the best work done on the character in decades. I hope Snyder’s run improves and I hopeful he will hit it out of the park even my super high expectations.

As for this issue itself, I need to re-read it. I liked it, but once again I was slightly frustrated as it did not hold together for me on one reading. Bruce Wayne walks out of a bank and has a showdown with Commissioner Gordon. As he rides away his Batman costume is seen under his shirt. We flashback six days and over the course of an adventure we find out that this Bruce Wayne is Clayface. Clayface apparently can now get a DNA sample and actually become that person. Does that mean his has their memories and thoughts or what? Does he know Bruce’s secret identity? In many ways I guess I just need to read the second part before I judge it. The bottom line is the Snyder/Capullo Batman is one of DC’s top series, if not the best series they have going. I can’t wait for the Absolute collections down the road and we need one for the Black Mirror story.