Some weeks I write four or five posts and sometimes I struggle to get two done. This week I was pressed for time more then usual. I also enjoyed the brief blurbs on what I read and had fun giving my ratings. I had so much fun with that format I’m back doing it for a second week. Lee had the suggestion to only bold and red the rating at the end, so I have adapted to that. He had another suggestion which I rejected. OCD man sometimes gets a little inflexible. I kid about OCD, but I swear all comic book fans have some form of it, whether obsessively collecting a character or the way we order our books or some other idiosyncrasy. 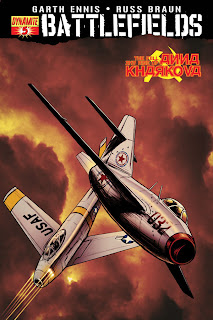 Battlefields #5 by Garth Ennis and Russ Braun is Part 2 of the Rise and Fall of Anna Kharkova. This is the character from one of the other Battlefields series as we follow the fate of the former Night Witch. Anna is a great character. We catch up with her during the Korean War. If anyone wants to read the absolutely best work of Garth Ennis it is his war stories. Russ Braun’s wonderful art is fantastic,

Mister X Hard Candy by Dean Motter. This is a one shot and perhaps collected from Dark Horse presents. I admit I never got Mr. X 100% but the character has a cool vibe. This one shot was a great introduction to the character and the city which is another character in the book. It is not something that I would recommend for everyone.

Read it on the stands.
Rachel Rising #15 by Terry Moore is a great horror story. The emphasis is on story and the horror is getting more prevalent the deeper we go into the story. Terry’s clean line work is admired throughout the industry and his ability to construct a compelling and well done story is without question one of the best. Even with all of that I would not recommend jumping into this book unless you start at the beginning. 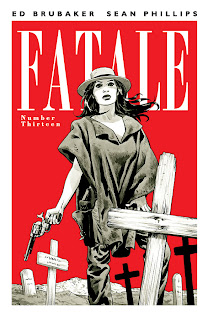 Fatale #13 by Ed Brubaker and Sean Phillips was a great one and done story. Ed is doing the best work of his career and Sean’s work seems to improve as the series goes on. Sean is a great noir artist and I have always enjoyed his work, but he just seems to improve as time goes by. It is not a dramatic change, but it is one where I get the feeling he is always doing just a little more or trying a new camera angle. I think Sean belongs on my list. The one and done issues have been great as we learn about other Fatale(s) throughout history. They are tragic and the underlying horror that connects them continues to be a mystery that envelops the entire series.

Uncanny Avengers #5 by Rick Remender and Oliver Coipel was a great issue. We see more team members get added. We harkened back to the first time a dramatic change in the lineup was made as the press conference is held to introduce them to the world. I know it has been done a ton of times but seeing Cap and the Scarlet Witch made me think back to that early issue. It had a great twist at the end of the story and the repercussions should be fascinating as Cap is trying to erase the distrust between humans and mutants events continue to play against it. 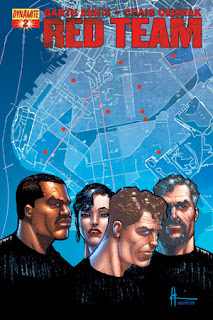 Red Team #2 by Garth Ennis and Craig Cermak was another good issue in what looks to be an entertaining series. We switch to the female member of the group telling the story. As with the first issue you get the impression the team has been captured and are being interrogated by whoever caught them. I get the feeling that the first four issues will be told by each character and I don’t believe the interviewer wants them to stop. Red Team is shaping up as a very good series about cops who decide to kill some bad guys but are trying hard to be self aware about what they are doing and way. It has a lot of talking, but enough action and a damn interesting story.

Justice League Dark #18 by Jeff Lemire, Ray Fawkes and Mikel Janin. The art is good, the story is okay, I’m just not sure I really get what the group is all about. Especially as John Constantine is the leader of these guys. The character and Lemire has been what keep me around this long, but they really aren’t the characters I actually cared about. It is probably a series for me to drop soon.

I, Vampire #18, hey it ends next issue. Unless you have been following this series it is not for you. The series itself has been very good. 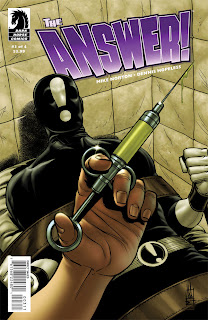 The Answer #3 (of 4) by Mike Norton and Dennis Hopeless is just fast paced and furious fun. We find out more about the organization who has captured Devin and all the craziness that surrounds the place. The Answer is shot in the chest at the end, but since he was killed in the first issue and ‘another” Answer showed up I’m not worried about that. Way too much going on for this series to be ending so I hope it is doing well so we can get another mini-series.

Guardians of the Galaxy #1 by Brian Bendis and Steve McNiven. First off the art is the biggest draw in this book. McNiven’s art, as always is great. In fact he is another add to the artist list I have of who I want to own. As for the story itself it is better then normal pace for Bendis as we have the group all pulled together, a premise is set and the sh*t hits the fan. I’m just confused as it appears the GOTG will be guarding Earth from all sorts of extra terrestrial threats, so why is Iron Man part of this group? It is a little confusing as Iron Man is still doing a lot of Avengers stuff and I know Marvel foes not really care about cross continuity, but some elements demand a little explanation. I guess I’m supposed to follow Iron Man, but for all his popularity in the movies I’ve never been a big Iron Man fan. Bottom line the book has a great cast of characters, fantastic art and a decent story. 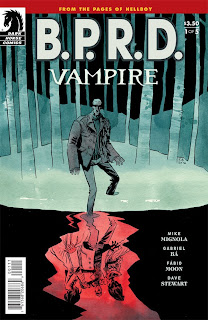 BPRD Vampire #1 (of 5) by Mike Mignola, Gabriel Ba and Fabio Moon. You don’t need to know anything about anything to jump into this mini-series.  We start with a river of blood and set up the story from there. Ba and Moon are handling the story and art with Mignola also on the story. It was a great first issue and a very easy read.

The Legend of Luther Strode #4 (of 6) by Justin Jordan and Tradd Moore. If you have not gotten this series by now the book will make zero sense. We are going deeper into the rabbit hole as Jack the Ripper and the old guy are both part of the same cult of violence that help unlock Luther’s powers. It is a very cool story, ultra violent and well done.

Wait for the Trade unless you are following the book.

Judge Dredd Year One #1 by Matt Smith and Simon Coleby.  It was the start of a good Judge Dredd story but I had no feeling the book was truly a Year One type of book. Nothing, other then a few remarks that it is early in his career, made it feel like a Year One experience.

Read it one the stands. 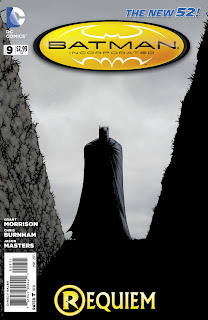 Batman Incorporated #9 by Grant Morrison and Chris Burnham is a great continuation of the epic story that Grant has been doing with Batman versus Talia. This issue is a great memorial issue showing Batman feeling the loss of Damian, yet still continuing the story. At the same time I believe this book is easy to pick up and read even without any background. Grant is doing some of his best cape work and Burnham is a fantastic artist. This is the best Batman book on the stands.

Age of Ultron #3 (of 10) by Bendis and Byran Hitch. It has great art but this is Bendis at his decompressed best. For $4 we get a free digital edition some AR, but a story that was all about the last page. 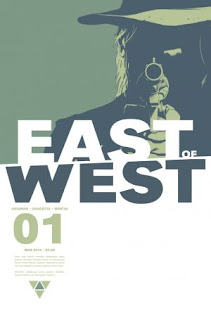 East of West #1 by Jonathan Hickman and Nick Dragotta was okay. Hickman is one of the most frustrating writers out there. In some ways he reminds me of Azzarello in that it is not a straight forward approach to what story he is telling. What that means that even a successful story will read better as a trade. Even with that the alternative history of Earth he has created is a vastly different world. The is a group of 8 countries now and we have a wildly different type of today. It is a mix of a high tech wild west with a touch of Christian mythology as the Four Horsemen of the Apocalypse, at least three of them, are our central characters. What is going on and why things are happening are still to be explained. The art is solid and at times very good.

Buy it and try it – not for everyone.

Last and far from least is Green Hornet #1 by Mark Waid and Daniel Indro. It was a great issue and Waid does a terffic job of establishing everything about the character and giving us a one and done adventure. Then he gives us a great cliff hanger to make us come back for next issue when it all starts to go to hell. Indro’s art does a great job with the story. It is a very easy and enjoyable read.

To wrap it all up, a few brief notes. First, congratulations to Dynamite Comics and what they are producing. For years I have felt like they were a low tier publisher with a few books I would want to follow, but far under the scale of companies like Image, IDW and Dark Horse. Now they have really managed to step up to the plate. The writers are Waid, Ennis, Roberson, Diggle, Simone, Wagner and many more. Slowly the art is getting better and better and even the lesser known writers are very good for the most part, just not “names” due to Marvel and DC exposure.

Still, I wonder about the whole creator movement and creator rights stuff as it comes to the characters they are using. I’m almost 100% sure ERB, Walter Gibson, George Trendel, Fran Striker and others garner no income for their estates from the use of these old characters. While we rant and cry about the injustice to Seigel, Shuster, Kirby and Ditko we do not seem to give a whit about the creators associated with this stuff. Also if I have read correctly copyright laws were suppose to be a form of limited protection when it started and the idea of public domain is one that used to be honored. Heck if you read this stuff and go out and buy the novels it is based on I’m sure some royalties still pass to the estates. I just think this is a great intellectual discussion as we have twisted ourselves up in laws and what is right versus what is “owed” to someone.

A final note is that while there were few “knock my socks off” books, for the most part it was a very enjoyable week of books. I still have more to read but what I did read was well done.

Come back next week and we can start this party over again.