Preview of the Week of April 10 in Review

This week consists of four detailed reviews instead of the massively long short commentaries of everything I read. Consistency in a format is something I actually strive against.
Some snippets from each post: 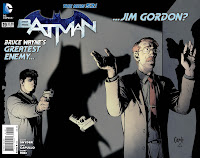 See the entire exciting posts in all their glory on Monday and Tuesday.
Posted by Jim at Sunday, April 14, 2013