Wonder Woman: Then and Now (Part 2)

First, and most obvious on glance is how the gods are depicted.  The Perez version was very much in keeping with traditional views of the gods.  Aside from the half goat Pan, the gods are paragons of physical perfection.  Anglo physical perfection, anyway.  So very Anglo.  Anyway, the gods in the Chiang version are not so much imperfect as representative of ideas in their appearance.  This is especially true of the male gods.  Poseiden is a monstrous, leviathan fish.  Hades is a boy with lit, melted candles on his head that obscure the top half of his face.  Hephaestus is something of a troll with hands that look like they're made of lava.  Hermes is very birdish, with talons for feed and a hawkish face, and very raptor eyes.  Apollo is ebony.  No, really, he looks like he's made out of ebony.  In fact, so far only Hera and Cupid appear human.

Personally, I like this new take very much.  In reading the 1987 version

I often had no idea which goddess was which, even though Perez gave them distinctive faces.  They were just too much of the same general parameters of appearance, clad as they were in the usual togas and sporting curly locks.  The Chiang versions are immediately recognizable for who they are.

Which brings me to the second major distinction.  Perez and Wein had the characters refer to one another by name all the time.  It was the style of the time with superhero books, along with the long expository soliloquies and description boxes.  It reflected the buying pattern of the time, which was generally younger and not all that likely to get every consecutive issue of a book.  Filling in what was missed was expected.  But, man, is it a drag to read now.  It slows it all down.  Azzarello and Chiang present a story where dialog and pictures work hand in hand, not repeating one another.  The only words on the page that aren't characters speaking are location identification, such as "Firenze, Italia".  The words that are spoken

flow like modern speech, including the gods.  There's no swearing in the book, but there's no artificial explosions of shock or amazement that use phrases no actual speaker would use (Holy catnip, Batman!).  Paying attention to who is speaking and what they're doing in the picture is important to keeping up with the story, whereas the older story could almost be read without the pictures.

In the end, I prefer the subtly of the new Wonder Woman over the heavy handed exposition of the 1987 Wonder Woman.  Which is not to say that the older version wasn't great.  It was.  It broke all kinds of new ground with the character.  Much of what was new then is relied on as a basis of what Azzarello is doing now.  It's just it's a lot more nuanced now.

Which brings me to what I recall to be Lee's two biggest complaints about the new book.  One was that Hera is naked all the time.  The other is that the new Wonder Woman should be a point of entry to the DCU and isn't.

Naked Hera I addressed in our discussion.  She isn't naked all the time.

She's naked but for a peacock feather cloak that she dons when she's out to eliminate someone who slept with Zeus or to eliminate the offspring of such a dalliance.  Otherwise she's rather traditionally dressed in a toga.  The nudity is an aspect of her power and makes sense.

Besides which, there's the exact same kind of nudity in the first issue of 1987 Wonder Woman.  Hell, it's even on the back cover.  When Hyppolite and her Amazons are taken captive and raped by Hercules and his men they're pretty much all naked.  They're all naked when they come up out of the lake/pond where they're re-birthed, too.  I don't think the Hera nudity is any more an problem now than that issue was then. 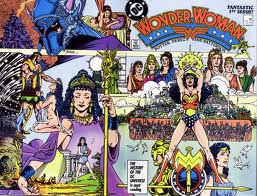 I don't think either book is much of an entry point to the DCU of its respective era, either.  The current book has nothing at all to do with the wider DCU.  There hasn't been a single mention or appearance of another hero from the DCU in the first year and a half (foreshadowing a bit from what I'm covering here).  This is just as well, from what I've heard about how she's portrayed in JLA.  They're two entirely different characters.  The 1987 version had a stand alone issue where various minor characters wrote about their interactions with Diana over several months, during which one of the characters mentioned her meeting the JLA and having a particular fondness for Superman.  And, of course, Diana was spirited away to the Millenium crossover at the end of the first year.  But that's it.

Now, if you mean by entry point that young readers could read from the first issue to gain an appreciation for the DCU and pick up more books from there, I'd have to say the current version is better for that than the 1987 version.  This Diana is saving a pregnant woman from a jealous woman, then saving the child from machinations by royalty.  This Diana is an independent woman who loses those who raised her, and clearly didn't have an idyllic childhood, but nonetheless had a very good one.  This Diana is an equal with the gods she fights, especially when she removes the bracelets that restrain her power.  She can't fly, either, which makes her more relatable.  If you want a kid in the low teens to read this, yeah, you might be a bit uncomfortable with the out of wedlock pregnancy and marital affairs.  Then again, you might be fresh off the Amish farm.  Otherwise I don't know how these young teens wouldn't be aware of such things.  You don't have to be participating in them to be aware of them.

The 1987 Wonder Woman is quite different.  She's uncertain of who

she is and where she belongs.  She's largely subservient to her mother.  She seeks supplication from the gods.  Her mother and all of her fellow Amazons were raped and imprisoned, then more or less blamed for that by the gods and exiled to Paradise Island, which is a misnomer if ever there was one, as their sole task there is to guard a portal to keep demons from escaping, which periodically results in the deaths of some of their number.  When Zeus takes an interest in the Amazon's it's so he can be at his seed spreading peak, which the other gods don't openly oppose.  There's far more I'd be concerned about teaching young girls out of this book than out of the current book.

The art in 1987 Wonder Woman is much more classically beautiful.  Perez really can't be beat in that regard.  The plot lines were good, solid starts for the book's run, too, Millenium nonsense aside.  But when it comes to reading a story, I much prefer both the style and substance of the Azzarello run.  I highly recommend it for anyone looking to start reading comics, whatever the age, too.  Ok, not elementary school, maybe,  but you get my drift.
Posted by Thomm at Thursday, April 11, 2013