Continuing from yesterday and we get to the three best books of the week.

Mara #4 is the second Brian Wood book that I was considering dropping. This issue we finally got more into the crux of the series. Mara is a full blown super hero and she has no clue how it happened. The government wants to use her as a secret weapon and has faked her death. They will not tell her brother, but promise to keep him safe if she cooperates. She escapes to go find her brother and the government comes after her. She escapes, but it appears the brother will be used as leverage to try and control her. The first three issues did not add that much to the story and this issue could almost have served as the start of the book. It is not a bad book; it is just one that will read better collected. Pacing is critical to any comic, but a mini-series, even one that is the start of a hope for series of mini-series should have started faster. The art is competent, but lacks any real panache. 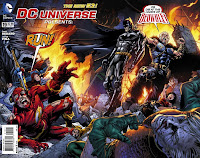 DC Universe Presents #19 was a last minute add when I found out it was about Beowulf. This was the updated version by Tony Bedard and Javier Pine from the Sword of Sorcery book. If I hadn’t seen the gatefold before the book shipped I would have missed out on this issue. It was a very enjoyable issue that wrapped up Tony’s storyline and even gave us an ending that could be a new beginning. Little runs like these are forgotten, but Tony and Javier did a great job with trying to make this all fit into one issue. By the way these fold out covers are so lame and dishonest and to not be worth commenting on. This one shows Beowulf trashing the JL and in reality he fought a shape shifter who took on the forms of some JL members for a panel or two. Bedard is an often overlooked writer, but his books are always well done.

Superior Spider-Man #8 was reviewed by Matthew here. All I have to say is this book is what I often want out of a comic, a quick enjoyable read. Now we will see if I’m correct in what I’m predicting. I think that next issue Potto kills off Jimney Parker and then we wait for awhile until Peter triumphantly comes back with Carlie’s help. 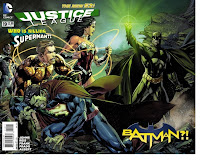 Justice League #19 just sucks ass in so many ways. First the gatefold cover shows Batman holding GL’s ring and attacking Superman, is not in this book. Instead some bozo breaks into Batman’s cave, looking like Bruce Wayne did when he came back from the past in stuff prior to the new DCU. The cave recognizes the intruder. Then Batman runs over and has a talk with Supers and WW about work and dating. Seriously, that was about it. The indeterminable Return of Shazam looks great with Gary Frank’s artwork, but having the best part of the comic being the backup is a recipe for disaster.  The book has no flow to it at all and the idea they are a team appears to be just a rumor. We are 19 issues in and this book does not have the feeling of a group book at all. It spends why too much time trying to build up stuff and never delivers any actual adventure. A side note: the deeper we get into the new DCU the more and more stuff I realized never happened. The writers refer to crap they think happened but when you re-read or look at what they are referring to it could not have happened. Marvel’s history is squishy at best, DC’s is a mess because they never created a bible to start the new DCU.

Miniature Jesus #1 by Ted McKeever was interesting. A recovering drunk is seeing things and at a church a miniature Jesus comes off the cross and comes to life. The whacky preacher goes to step on Jesus and that was the issue. It is also oversized and in black and white. I’m an idiot so I will buy the next issue, but this is obviously a graphic novel being split into solo issues to underwrite the hoped for trade. Not enough occurred to draw me in 100% but McKeever’s work is nothing if not interesting.

Age of Ultron #6 was a decent issue. I love that Marvel rolls this stuff out almost weekly, if not the indeterminable length of time it takes to get to the story would be killer. Speaking of killer, Wolverine goes back in time and kills Hitler, I mean Hank Pym, because Hank invented Ultron so this will fix everything. I hate this type of idea. First off we are all schooled in how comic book time works and this could just be an alternative time line or it will be the butterfly effect and the entire globe is worse off. How does this time storm that has been set off hit our heroes in the future? Hopefully it cures Cap from being decapitated as he was in this issue. Even with all the complaints it is an effective popcorn movie. I’m also curious as to what impact they will allow to come back into the real MU. The idea of Angela from Spawn and Neil Gaiman being brought into the MU is the biggest non-event ever, so they say that is not the change.

Daredevil #25 was one of the best books out this week. It also seems to prove the point the best stories for Daredevil is when he gets his ass handed to him. Whoever is behind this take down of Daredevil is still remaining in the shadows but a new bad guy who was created to be the yin to Matt’s yang is an excellent addition.  Ikari’s costume is a variation of the old yellow costume. He is a skilled martial artist who has DD’s radar sense. In order to combat him DD turns on a sprinkler system as he knows it kills his radar sense, unfortunately Ikari is not blind as DD assumed. He then summarily gets his ass kicked and is told to wait for when they will kill him. It seems that the light hearted stories never work as well as sending Matt down a long dark alley. Like Born Again, taking DD apart and waiting to see how he can come back makes the best stories. The Frank Miller stamp remains forever imbedded on DD. 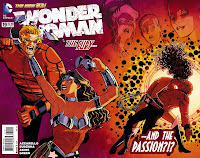 Wonder Woman #19 was another excellent issue and if it was not for Todd and DD, would probably the best issue of the week. I love that this book is totally its own thing. If DC intrudes on this book with some stupid cross-over or drags Superman into it, I will be pissed off. This issue we see how Wonder Woman has pulled together an odd group as her army. Of course she ticks off Orion who leaves and is also quitting. At the same time we have the first born and Apollo reading for a war. I wish Cliff Chiang could be on ever issue but Suduzka and Akins work was decent.

Buy two and give one a friend.

Todd the Ugliest Kid on Earth #4 (of 4) was the best book of the week and we are getting a 5th issue in September as it is now an ongoing series. This book is classic Mad Magazine parody at its best, the really old stuff like Superduperman. Each page is packed with gags both with the dialogue and visual. The book actually has a plot also which wraps up this story with Todd getting out of jail and getting a newly adopted sister, who also has a bag over her head. It also mixes biting social commentary and pokes fun and anything and everything it can. This is a black comedy with a heart of gold.

Buy three and give them all to friends and go buy the trade for yourself.

And that is a wrap, be back next week.