Well, I’m back from my travels, but I’m still on Spring Break after a one-day drop in at work.  I figured if I had to go into town to go to the comic book store anyway, I might as well put in a day.  I had a great trip visiting the HighbridgeTrail State Park and Historic Jamestowne.  The lowpoint of the extended weekend (besides the I-95 snail traffic) was seeing GI Joe: Retailiation -- let’s just say I enjoyed my theater nap at least.  On the home front my comic funds are abysmally low right now, so please check out the lots I have on eBay (I need some cash – the LEGO double VIP promotion will end soon!).  Netflix just added Batman Beyond, the Justice League cartoons as well as Powerpuff Girls and the first season of Foster’s Home for Imaginary Friends (awesome entertainment to be sure).  I don’t know if people are getting tired of my one-track posts concerning the Superior Spider-Man or not, but I’m still having fun doing them (and my Recent Reads posts have much lower page views).  So without further ado… 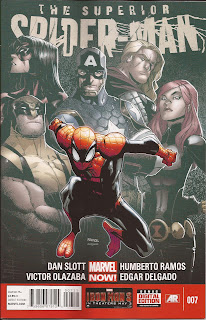 This was another great issue, but it did suffer from high expectations, and I was disappointed that the promised fight with the Avengers was delayed.  However, I did like the Cardiac sub-plot.

The title of this story was “Troubled Mind: Part One: Right-Hand Man” and I believe it’s the first multi-parter since “Dying Wish.

Cardiac is a character from the old Erik Larsen issues.  Erik had a phenomenal run on Amazing back in the day, especially so since he had the unenviable task of following super-star Todd MacFarlane.  I don’t know if Cardiac has been seen since that time (20+ years) or not, but in case you’ve forgotten he’s actually Doctor Elias Wirtham (think Ben Carson [2016] with electrical superpowers).  The good doctor is actually “good” and he only steals to fund his medical research that he performs for the benefit of humanity and his patients, while foregoing the tedious and time-consuming procedural trials.  The issue opens with him talking to Norah Winters before entering his beautiful two-page spread secret lab.  There’s a little girl with brain damage that can be helped by “only one device on earth”.

Meanwhile as a change of pace and POV, ghost-Peter takes front and center in the narration this time.  He’s none too happy about Potto®’s recent violent attacks and he attempts to exert control over his own body.  He’s only partially successful.  He moves his right-hand to write something, but it only comes out as a garbled scribble.  When Potto® awakes to his phone’s Patrol App, Peter quickly swats the notebook away to prevent any suspicions.  Spider-Man swings into splash-page action with a loud exclamation and Peter remarks “God, Otto you are such a tool.”

Cardiac is searching an Area 51-type warehouse when Spidey arrives to stop him (after ordering the police to secure the perimeter).  He initially knocks Cardiac down with ease and demands his surrender or else!  Like a good parent he counts to three before the punishment begins.  Potto® doesn’t seem to care if Cardiac has noble motives or not, to him he’s just another law-breaker.  Peter on the other hand is very worried:“Ock! No!  Don’t go all psycho-Looney Tunes on me!”  With claws drawn (and actually “drawn” this time – some artists forget about them) Spidey is about to SWIPE.  But Peter screams “STOP RIGHT THERE!” to the tune of Meat Loaf’s classic hit and Potto® not only stops in his tracks, but he also hears the voice (although it’s unrecognizable to him).

Cardiac recovers and the two restart their melee with crates splintering open everywhere.  Luckily, Cardiac happens upon the device he was looking for – Otto Octavius’ Neurolitic Scanner.  Needless to say Potto® is incensed when he recovers the device and doesn’t want anyone else to use it.

“You PILFERING PARASITE!  What gives you the RIGHT to feast on the fruits of another man’s GENIUS?!”

Spidey gets Cardiac in a chokehold and is about to kill him with one punch when ghost-Spidey saves the day again, forcing him to let go (I guess too little too late for Massacre).  Potto® is bewildered by his behavior and Cardiac uses the opportunity to escape during his confusion and after stunning him with Beta Energy (whatever that is).  Potto® did manage to throw-out a Spider-Tracer on Cardiac before he left, but he’s got to do some lab work before he goes after him.

Then his Avenger’s ID card issues a Priority One Alert.  (FINALLY!!!)

Potto® arrives at Avengers Tower supremely confident of their need for his abilities:

“This ain’t an emergency, Bub.  It’s an INTERVENTION.”

Cap shows Spidey footage of his over-the-top battle with Cardiac and demands that he be examined to “prove” his identity.   Ghost-Peter is ecstatic:

“YES!  Earth’s mightiest heroes FOR THE WIN!  FINALLY someone out there NOTICED!  I was starting to think you were all taking STUPID PILLS or something.”

Potto® refuses and flips Cap over.  Everyone else (Wolverine, Spider-Woman, Black Widow, and Thor) prepares for battle in another outstanding full-page splash with Ghost-Spidey relishing the whole idea.

Next the Avengers versus Spider-Man.  It’s going to be intense!  Didn’t I say that last time?

GRADE B+:  It was just like a Dark Shadows episode.  The previous cliff-hanger managed to be pushed back for an entire issue.  Besides that, it was another great chapter.
Posted by Matthew at Saturday, April 06, 2013