In Matthew’s reviews on Saturday he mentioned one’s mental state coming into reading and reviewing a book will have an impact on their viewpoint. Well I have a lousy cold and feel like total crap, so this will not be one of my best columns ever. In fact I’m just basically doing one long post about what I managed to read and will break it into two parts; otherwise it will be too damn long. I actually called out sick on Friday from my real job, which is about a once a year occurrence or less.

Now before this becomes a pure pity party lets give you the list for next week’s books with the clean list at Cosmic Comix and the detail listing at Midtown Comics. The top five books for week appear to be Batman Inc, Jupiter’s Legacy, Mind Mgmt, Fury Max and Before Watchmen the Comedian. I believe that leaves only one BW book left.

Okay onto the comics I read and I plan to be direct on a lot of these books as I feel many were missing the bang for the buck.

Cable and X-Force #7 as a $4 book sucks as a $3 book it was okay. Apparently Marvel wanted the strangely costumed Cyclops on all sorts of covers for a month. That X across his face has to be a bitch to see through from the inside. The mission statement for this book is for the team to act on Cable’s future visions. It is minority report done as a super hero adventure. I love that people are willing to sign up with Cable to do stuff and stop what is going to happen. I can’t wait until the red ball comes out saying to kill Cable.  The issue was a waste on many levels. This is decompressed story telling Bendis style. Cyclops shows up to say hi to Cable and wish him good luck. Dominion is keeping prison guards away while Boom Boom frees the mass killer alien. They are freeing him to prevent others coming after him and killing six million people as they go after him. The mission goes tits up at the end. The problem the entire length and breadth of this issue was five pages maximum.

Iron Man #8 I picked up because I like to get an issue ahead of an arc I want to pick up. This issue is the wrap up before the new Secret Origin of Tony Stark. Curiosity has the better of me and I want to see what unmitigated bullsh*t they are going to do to rewrite Iron Man’s beginnings. This issue was not bad in and of itself. I’m glad I only got this issue because the entire arc was easily discernable in this one issue. Iron Man got played by a Recorder and it ended up wiping out a group called the Voldi. Although they were trying to kill Tony he now wants revenge on the Recorder. Why Tony is in outer space is still a mystery to me.

Nova #3, the kid looks like he is 12 and going to high school. I hate the ultra young heroes. That is why I could care less about 12 year old Ultimate Spider-Man and I’m having issues with this book. I was shocked to hear Loeb and McGuinness are off the book after five issues, maybe that means we can get more story per issue. McGuinness big bold panels mean you get less story per issue then almost any other comic. To give Loeb credit he tries to pack as much as he can into the book. This issue Nova goes to Moon, meets the Watcher, gets trained by Gamora and Rocket and then goes off to scout out the invading bad guys coming in from space. It is a fun ride and a decent book, but again paying the extra buck for the digital comic is not worth it.

Read it on the stands, it will only take a minute. 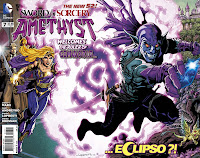 Sword of Sorcery #7 is a decent read. In fact the artwork on the Amethyst feature is superior. Lopresti is absolutely killing on this book. I’ve enjoyed the back up series as Beowulf and Stalker are reinvented for the new DCU. The problem is this is a marginal audience book at best and making it a $4, even with the extra pages was a death knell. I know as a 50 plus year old man I was not the target audience and it was only the back up feature that made me hang around. Since I did, I read the Amethyst stuff and while the art is superb, the story has been weak and too often tied back to Earth. This is another book to be cancelled by DC, man is there a lot of blood in the water at DC.

Thief of Thieves #13 is the last issue of Asmus arc as writer. Kirkman is using the TV show model for producing this comic. He probably is plotting an outline for each arc and then hiring writers to produce the scripts. I’m on the borderline with this title. The capers are fun and their escape from the police this issue was interesting, but I was not expecting this book to be a father / son thing. I was hoping for more of a “To Catch a Thief”, this is more of loser son drags Dad down. The funny thing is the writer is normally a draw for me, but not so much when it is Asmus, Diggle or whomever who is a hired gun to write a script to Kirkman’s idea. Now it becomes more of I like Kirkman’s stuff and not that I’m buying for the script writer. The final analysis is that the book is entertaining but not good enough at this point.

Chew #33 is the epitome of an entertaining comic book. From the vague sexual tension between Colby and Director Applebee to the double page spread of Poyo vs Pengthulu it is just a blast to read. Layman does a fantastic job with making the book humorous and outrageous and still providing us with a plot driven story. Tony is all business as he is driven by vengeance. This is consistently one of the best books on the stands month in and month out.

Buy it, and buy the hardcover collections (it’s what I’m doing).

Captain #6 continues the Kirby Acid trip by Rick Remender and John Romita Jr. I’m actually enjoying this book so much the $4 price tag does not irk me as much as it does on other Marvel books. Like Rotworld and Age of Ultron you know that it can’t have as much of an impact on Captain . He has spent 10 years in Dimenson Z and he can’t be missing from the MU for that long. Of course nothing has long lasting impacts on any character, so it is just enjoying a well told story and we have that here. It is interesting as Cap appears to cross the line Potto crossed with Massacre and all of a sudden we are running out of heroes who won’t kill. I’m not buying that Cap capped her anyway.

Danger Club #5 came out. I thought the book was cancelled or died. I had enjoyed the first few issues, but it has been so dragged out I can’t even begin to remember all that had gone before.  Essentially the President appears to be some old super hero who has gone mad and the sidekicks try to stop him and the issues ends with a white out. In comic terms it appears to world has come to an end and being rewritten to suit the bad guy’s world view. I like this book, but the schedule is killing it.