I’m going totally old school this week with three parts focusing on the Marvel, DC and then the Alternative press stuff. I will forewarn you that my negativity towards DC continues to grow. 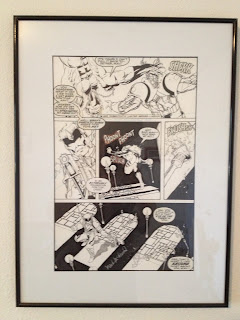 First I wanted to mention a cool Kickstarter project I’m backing. It is called Combat Jack’s The Director’s Cut by Mark McKenna. Mark is a well known inker and he appeared at my comic book store that I had back on the early nineties. I have included a picture of a piece of artwork he inked, signed by him and framed in my office. This is a one and done story that looks to be a lot of fun. Check it out here and if you like it become a backer.

Before we jump into the few Marvel titles I got this week we need to do the stuff about what is coming out this week. The clean and simple list is at Cosmic Comix and the detailed listing is at Midtown Comics. Looking out to next week’s books I’m saddened that my list is not shorter. I did manage to cut out Heckblazer (Constantine) from my list. I tried issue #1 but it just feels too super hero to me and not want I enjoyed from the character. Sadly it will probably sell better then Hellblazer. The top five for me looking ahead are Hawkeye, Sex, Saga, X and GI Joe Cobra and that is in a week the includes Batman, Batman and Robin, Uncanny Avengers, Uncanny X-Men and Walking Dead. It should be a very good week.

One thing I will give most Marvel books is they are usually easy reads. The writers, artists and editors are all highly professional. I’ll give credit to Alex Alonso for that as editor in chief. Under his tenure I think the Marvel stuff has improved. 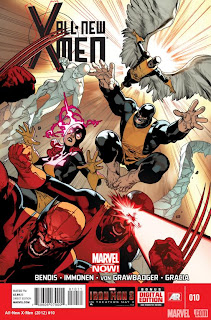 First up is All New X-Men #10 by Brian Bendis and Stuart Immonen. Hard to believe we are already ten issues deep into this series. The numbering on this book will be lapping the New 52 in about a year. It is without a doubt the slowest paced book coming out but the two a month, or whatever it is, pacing makes this an enjoyable read issue after issue. It does not hurt that both artists on the book do terrific work. Instead of starting with the ending of last issue we cut away to what appears to be the original X-Men and Wolverine robbing a bank. Instead we find out Mystique, Sabertooth and Mastermind are behind it. They are going on an old fashion crime spree to get cash for unknown reasons. It would be funny if they were just doing it to have money and retire to some other country. We then get to the stuff that I really enjoyed as current Cyclops shows up at Wolverine’s school. Scott finally starts talking about the idea of “Do you all really think I would have killed Professor X if I was in my right mind”. This story point always sticks in my craw because in the comic book world Wolverine was controlled by the Hand or something under Millar and killed a ton of people and he is bitching over what Cyclops did. These supposed “heroes” all have so much blood on their hands over the years that the whole current Cyclops is a bad guy rings hollow. The idea of building an army versus running a school is at least a more interesting dynamic. It is also amusing as we have now made the old Professor X versus Magneto thing a Wolverine versus Cyclops thing. Of course instead of it being black and white it is now all shades of gray. 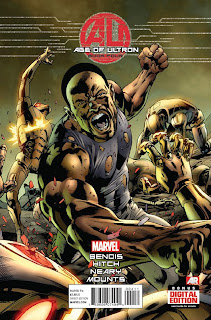 Age of Ultron #4 (of 10) is by that Brian Bendis guy again and Bryan Hitch. Hitch belongs on my artist list and I have just added him. While I’m enjoying the All New X-Men this book is boring. It is four issues in and we have hardly scratched the surface of the story. The odd look of some of the characters, especially She-Hulk, is off putting. Bendis unrelenting man-crush on Luke Cage is reaching the point where I fear he killed off Jessica Jones so the Luke is available for Bendis when he adds himself as a character into the comic. Like the DC Rotworld story it is hard to get excited or unnerved over all the death and destruction as it is all an alternative time line thing. I feel like we are just working up to the “exciting” change that will occur at the end of the story that will impact the Marvel Universe forever and be jaw dropping. Since AvX did make a decent impact for Marvel I’m guessing the wiping out of Ultron from the timeline will make some BIG changes for a few characters. Even as a popcorn movie this is barely doing the job for this jaded fan. 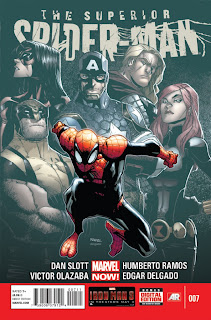 Superior Spider-Man #7 by Dan Slott and Humberto Ramos is a fun ride. I’m constantly amazed (pun intended) by how much I enjoy this book. At the same time I feel the $4 price tag is steep on this book and yet I don’t feel that about most Marvel books, not sure why. I will not bore you with another review as Matthew has it covered here.  I’m curious to see what happens with the confrontation with the Avengers and what the next big change in issue #9 is going to be. I’m guessing it is Peter Jiminy Cricket disappearing. My guess is that Potto dumps Peter as a ghost, we all think that Potto will now be Spider-Man forever more and then in about a year Peter is back in control of his own body. My best guess is Doc Ock eventually builds a new body for himself as he can’t stand being a good guy or something like that. Of course if Peter is truly eliminated what is Potto’s motivation to be a good guy at all. Lots of problems when you pick the story apart but a fun read. 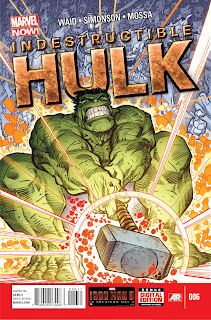 The final Marvel book I got was Thanos Rising #1 (of 5)  by Jason Aaron and Simone Bianchi. Now DC is now infamous for swapping creator stuff but I thought Jim Starlin was going to be doing this book. Bianchi’s style works fine for this story, although his young Thanos looks odd. I swear he does all his work via computer as it has that type of feel. Of course with the Wacom art tablets they still need to be great artists, it just has a different feel to the art then pure pencil and ink. The story itself was a clean miss for me. The bottom line was Thanos decides to kill everybody because he was not loved and his Daddy did not pay enough attention to him. Everyone thought he was a monster, so he becomes one. It makes Thanos feel less of a villain and more of a bad guy playing the victim card. Sometimes it is just cool to have a villain who is pure evil.