I have no long diatribe to throw out about Marvel. I will say that since the Marvel Now status quo over all it seems to me that solo character books are almost an afterthought. The core, foundation and first two floors of Marvel comics are all about the group books. Also the heavy publishing schedule of many of their books has forced me to cut out many other books that I may have followed like Uncanny X-Force, Ultimate X-Men, Journey Into Mystery, Young Avengers, Red Hulk, Moribus and a few others. I can only do so much of the Marvel stuff and 14 issues of All New X-Men in a month means other books have to go. 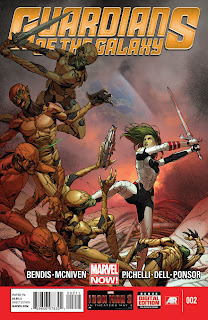 Guardians of the Galaxy #2 was another solid issue in this new series. I did find it immediately amusing that Steve (I’m not producing 20 pages in a month ever) McNiven is already only doing part of the book. What I love about multiple artists on this book is how Marvel made it work. The pages given to Sara Pichelli are a different story line and colored very differently. That means not having the same art was not jarring at all, plus she is a very strong artist in her own right. So many of Benidis’ books have the pace set in geological terms, but this book is moving at a great clip. The battle in is full of action, the “B” story line is setting up the confrontation to come and the conclusion was a brilliant cliff hanger. Also I never thought integrating Iron Man into this title would work, but so far it is working to perfection.

Uncanny X-Men #5 is yet another Bendis books with Fraser Irving on art. I can’t believe that the same Brian Bendis who I used to loathe reading some of his Avengers is killing on both X books and GOTG. Bendis, I felt had great ideas, but the execution against them did not always work, so that may still be the case. It was often his dialogue which killed his Avengers work, but I’m not noticing any issues in the X books or GOTG. Not sure how much the story dictated the artist or if it was luck of the draw but the examination of Magik’s power issues being played out in Limbo against Dread Dormammu was perfect for Fraser’s style. The story reads like a Dr. Strange story told with the X-Men. 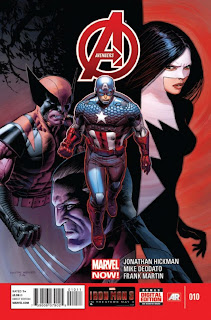 Avengers #10 by Jonathan Hickman and Mike Deodato was another good issue. Omega Flight in is in trouble and the Avengers are called into help. The Avengers escape with their life but what is going on with the Earth under the biosphere bombs that hit the planet is a whole different thing. The biggest problem I have with Hickman is he has an epic on the scale of War and Peace that he is rolling out over the course of who knows how many issues. He has introduced having a multitude of “C” and “D” list characters as Avengers, making up new versions of the old New Universe and stills is adding in others like Omega Flight. Mysteries abound, small character bits are here and there and the art is a big element that keeps me from giving up on the book. I’m glad I’m holding onto this series as I feel I will have to re-read the whole damn thing to get the idea of the story. The funny thing is Hickman had his magus opus in Fantastic Four also and except for the Future Foundation I can’t see that a thing changed in the book. What did Mark Waid once complain about not being able to have a lasting impact on characters? Even with all of those caveats the story is holding my interest and I’m on this book for the full ride.

Fury Max #11 by Garth Ennis and Goran Parlov is just a great continuation of an examination of Nick Fury. Fury is all sorts of shades of gray and as dirty as dirty can be in some of the things he does. Nick is a true believe in the ends justify the means. Still you sense an underlying intractable code of ethics in him, that he will do the right thing no matter the cost to himself. What has been especially brilliant is the integration of adding the Barracuda into Nick’s history. Garth has created his own little Max universe as Barracuda was a character he used in Punisher and even gave him a mini-series, if memory serves. Parlov is never going to make my Artist List, but his artwork tells the story and keeps all the characters in character, even as they age. 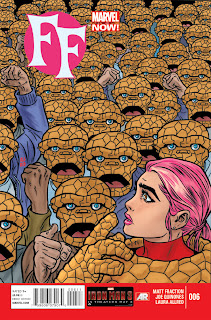 FF #6 by Matt Fraction and Joe Quinones suffers from the absence of Mike Allred. This quirky and odd ball FF needs Allred’s art to maintain that certain je ne sais quoi. This issue one of the Moloids comes out as a transgender character (I guess, was not sure of any sexuality of these guys), Darla and Scott shut down the gang and no one can find Medusa or Bentley-23. I’m enjoying this book, but without Allred’s art, this issue could not quite cut it.

Between Captain and Uncanny Avengers  #7 as well as continuing themes from X-Force I need to find out what drugs you are using. The mixture is apparently allowing you to understand all the various story lines and themes you are throwing up on the wall. You are making blush with jealousy over how many sub plots you can place in one issue. Of course adding Acuna’s muddied art into the mix just makes it that much more of an acid trip. Celestial gods split asunder with Asgardian weapons stolen in time, Alex Summers sporting a Nehru jacket, Black Fury, Wanda and Wonder Man, Wasp hitting on Alex (can you say Cougar) have all managed to make me forget about the Red Skull and Onslaught. My real world job is often stressful, so I thought if I knew the mix you were using it could give me a stress free day.