The Week of April 3 Preview Review

I went simple this week, yes this is an easy line for one of my co-bloggers to insult me with. Three parts by the main groupings I use for my list of what I get every week. 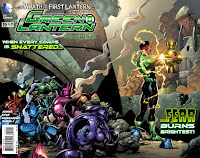 Buy the trade.
Come back Monday and Tuesday for all three full length posts.