In reading Jupiter’s Legacy it reminded me that the new DCU has destroyed the legacy of the DCU Universe. It is my opinion this is perhaps the biggest problem with the new DCU. DC tired to have it both ways by starting five years into the new DCU but has found that their severe lack of planning has made many continuity elements unfeasible, but they try to make them work anyway.

Now I understand all continuity based characters now have an untenable amount of history to deal with and even with a clean restart in ten years you will have a whole new history to have to deal with (see Ultimate Marvel Universe). Still DC has always been steeped in legacy ever since the Silver Age started. DC used the alternative world’s strategy, used Crisis on Infinite Earths to consolidate it, used Zero Hero, reboots of Superman and other ideas to constantly try and re-set things. With all of those gimmicks there was still a sense of continuity. Flash beget Flash beget Kid Flash, begat Impulse and retro continuity Max Mercury. Batman beget Robin beget Robin beget Nightwing begat Red Robin begat Robin begat Batgirl begat Oracle beget Batgirl and even more. When you look at some of the greatest stories of all time you’ll find JSA/JLA cross over event, The Watchmen, Dark Knight Returns, Grant Morrison’s run on Doom Patrol, All Star Superman and his Batman work and so many others, that all have a resonance of playing to a legacy of some sort. All Star Superman is a love letter to all the insanity of the Silver Age of Superman.

That legacy is totally gone now in the DCU and without it almost everything rings hollow. I’m not talking about being a slave to history but when Superman stands off against Lex Luthor, instead of all the great battles that occurred before it is a blank slate. If Batman faces Bane that history and sense of menace that this man beat Batman before is gone. Every encounter we have no clue if anything means what it did before. Instead of a JSA filled with second and third generation heroes, we have a whole new one being born on Earth 2. Marvel still has that history, so when a menace like Ultron rises again we know that this danger is “real” as opposed to wondering what is going on.

I think that lack of a history, or legacy if you will, has drastically weaken the DCU. I find it very easy to drop books like Nightwing, Batgirl and even Green Lantern because they have no relationship to the characters I love. Same name and similar costume, but that is it. Green Lantern and Green Arrow were never partners, Nightwing was never in Teen Titans, Tim Drake was never Robin, Superman and have no relationship, Green Arrow is a punk kid, Catwoman is a cipher. The legacy is gone and the heart of the DCU is gone with it.

Enough of the old guy whining about DC, I just still care enough to think it can be fixed. At this point it maybe to just start the whole thing over or do what Marvel did when they brought back their heroes from their stay at Image studios and say everything is back to what it was before Flashpoint and go forward. At this point I believe DC has screwed up their books so much that the only solution is a hard re-set and start over all the books from the beginning with some solid planning. Of course Didio, Lee and Harras have to be removed and Karen Berger or someone else respectable has to be brought in to run the place. It will not happen, but I can still dream of a better world.

Onto a few brief reviews. 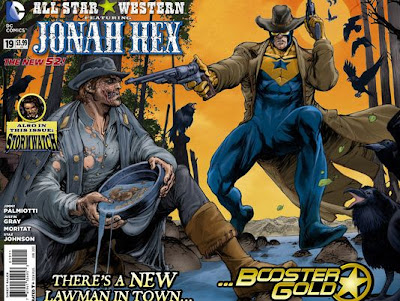 All Star Western #19 is one of the DCU books I have enjoyed for the most part. By moving to they tried to make it closer to the new DCU and it worked for the most part. Now this issue they shoved Booster Gold into it and the entire suspension of disbelief has been destroyed. I hope it is only one more issue or else I may drop this title. Booster Gold no matter how hard they try does not work in this book. Jonah is back in the west and Booster gets kicked to the past somehow and is still running around in costume. It is beyond any suspension of disbelief I can give this book. It reeks of some asshat editor coming up with a cover and the writers trying to make it work. (Update: I read that Jonah is being brought into the present day – who out there remembers Hex. Taking a “real” type character and putting them into the 100% unreal does not work.)

I, Vampire #19 brings the series to a satisfying if slightly rushed conclusion. I think DC should have supported this book more, but frankly once the main artist left, in lesser artistic hands it was not as good. Plus Failkov was obviously moving to the end of the story in a hurry. This was one of the best things that came out of the New DCU and I hate to see it go but very happy we got a solid ending.

Before Watchmen The Comedian #6 (of 6)  I believe this is the final Before Watchmen book. The gap between issues hurt a little, but all in all I felt like the series delivered a strong story about the Comedian and had beautiful artwork by JG Jones. I’m looking forward to getting the hard cover collections and then re-reading Watchmen.

Batman Inc. #10 by Grant Morrison and Chris Burnham with help was another excellent issue. Batman Inc. is one of DC’s best books and sadly Morrison is concluding his epic run on Batman with issue #13.