Indies Previews for June Part 1 of 2

Lee:  We're just jumping right into it today because for once I ran out of words. 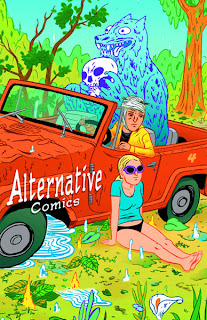 Alternative Comics
Alternative Comics #4 by (w/a) Craig Thompson
Alternative Comics' flagship anthology returns as a twice-yearly comic with more pages, showcasing the best indie, web and zine artists of today's underground. Contributors include: Alex Schubert, Grant Snider, Sam Alden, Mike Bertino, Theo Ellsworth and Craig Thompson. 48 pgs, B/W, $5.99
Lee: If you want to see the writers/artists that are really stretching the comic book medium then look no further because this is the book for you. I am sure this is all over the map in terms of stories, content, art styles, and just about everything else. But why else would you buy a book like this if not to experiment with new stuff.
Thomm: I like anthologies, obviously with my ongoing DHP following, but I’m not sure if stretching or unpolished is the right term for this. All the same, I’d at least give it a look. 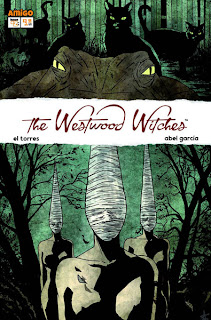 Amigo Comics
Westwood Witches #2 by (w) El Torres (a/c) Abel Garcia
Amigo brings the witchcraft horror into the modern world with the words of El Torres and art by Abel García! Jack is still consumed with his brother's death and his writer block, not knowing that his attractive neighbors are planning to abduct him to the Witches' Sabbath as human sacrifice! 32 pgs, FC, $3.99
Lee: I can’t believe I missed this before! Torres is a great horror writer and I am surprised he isn’t getting more recognition. His work on The Veil and Suicide Forest were both spectacular. Heck I even liked Nancy in Hell even though it was kinda dumb. If you like horror stories you really can’t go wrong with this book.
Thomm: I’ll have to take your word for it. The promo makes it sound a bit unoriginal. 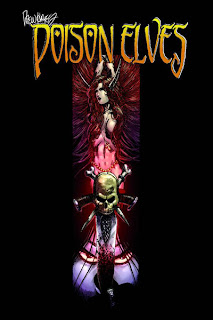 Ape Entertainment
Poison Elves Digest Vol. 01: The Mulehide Years SC by (w/a/C) Drew Hayes
From 1991 to 1995, Drew Hayes self-published an independent comic first called I, Lusiphur, then Poison Elves. The Mulehide Years contains all 20 issues of this seminal work, the origin story of an anti-hero named Lusiphur. In a surprisingly progressive medieval era where magic and violence rule the land, Lusiphur leaves the employ of an increasingly paranoid feudal lord to trek across Amrahly'nn in search of adventure - which he finds in abundance. This collection includes tons of extras including rare, out-of-print and never before published material! 480 pgs, B/W, $24.99
Lee: Poison Elves reminds me of a lesser Cerebus. Not in terms of quality because I’ve never read this series, but in terms of cult following. Hayes wrote this story for years, and the few people I know who’ve read it have loved it. At almost 500 pgs, this is very tempting.
Thomm: It’s an interesting concept, even if I don’t understand a progressive era ruled by violence. I’ll have to take a look at this in hand before deciding. 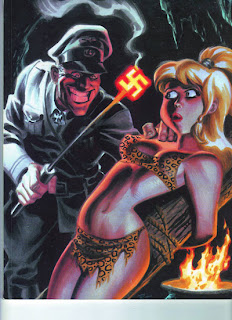 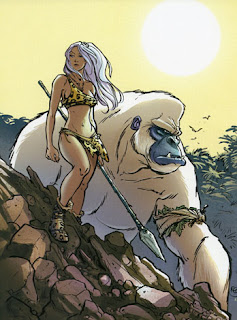 Art of Fiction
Five Color Comics #1 by (w) Erik Warfield (a) Troy Nixey (C) Bruce Timm
All new, original characters from The Art of Fiction featuring art by some of the greatest names in the comics and animation industries. 48 pages of action and adventure with pirates, zombies, jungle girls, and a giant ape! 48 pgs, FC, 8.5x11, $8.95
Lee: Although it would seem that I only picked this for the cover, not true! This is an oversized anthology title written/illustrated by animators. I have found that animators have some of the best, and most twisted, short stories in them. You can’t go wrong! And, because they are already animators the art is sure to be super.
Thomm: And here I thought you picked it for the giant ape. You know, for Jim’s benefit. The cover is very amusing, and I’m sure there will be lots of great art inside. Not so sure about the story quality.
Lee:  Actually, for the record, Thomm and I looked at different covers.  I picked the Timm Nazi version... 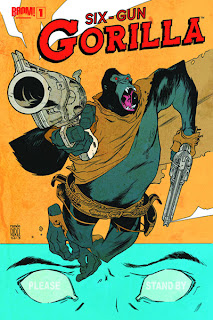 Six-Gun Gorilla #1 (of 6) by (w) Simon Spurrier (a) Jeff Stokely (C) Ramon K. Perez
Welcome to the Blister a bizarre otherworld colonized by humans sometime in the 22nd century, which quickly became a hotly contested source of fertile land and natural resources long ago exhausted on Earth. In this new frontier, a rogue gunslinger and his companion wander across a wilderness in the grips of a civil war, encountering lawlessness, natives, and perversions of civilization in a world at the crossroads between the past and the future. The fact that said gunslinger is a bio-surgically modified silverback gorilla toting a pair of enormous revolvers is neither here nor there. Written by Simon Spurrier, drawn by hot new talent Jeff Stokely (Fraggle Rock, The Reason For Dragons), Six-Gun Gorilla is a pulpy mash-up of Western weirdness and lofi science fiction unlike anything else on the stands! 32 pgs, FC, $3.99
Lee: Let’s be honest, this looks completely ridiculous. Which is why I am interested! Spurrier is an excellent writer and if he has a warped idea… it’s sure to be warped in the best of ways.
Thomm: Ok, now I know you’re making picks for Jim’s benefit. Maybe I should step aside for this month so you can enjoy the love from Jim. As for the book, it’s definitely got ridiculous written all over it, but in a good way. As a limited series it’s more worth a try, too, because I know it has an end point that won’t be stretched out for years. 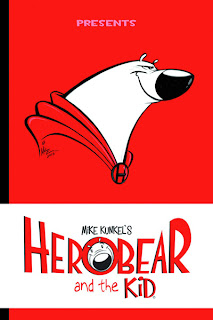 Herobear and the Kid Special #1 by (w/a/c) Mike Kunkel
The Independent, All-Ages Smash-Hit Herobear And The Kid Returns! It's Picture Day at Tyler's school, and naturally he's forgotten! But before Tyler can pick his good side, he has to sneak out of class with his best friend Herobear to stop an attack on the Simpleton Bridge from the mysterious Von Klon and his SubofDoom! ...and he better not lose his hallpass in the process. Don't miss as creator Mike Kunkel relaunches his Eisner award winning creation at KaBOOM! with a brand new original adventure! 32 pgs, FC, $3.99
Lee: Kunkel’s original Herobear story has been a huge hit in our house for years. I didn’t expect to get any more HB stories so I can’t even begin to express how exciting this. If you have kids, or grandkids, and you are looking for a book to start them with… here ya go!
Thomm: Cute. My kids are a bit beyond this now, though. 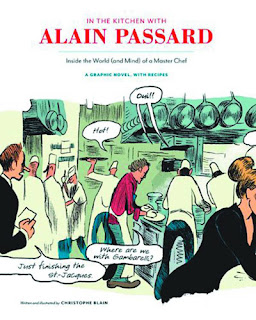 Chronicle Books
In the Kitchen with Alain Passard: Inside the World of a Master Chef by (w/a/c) Christophe Blain
Available in English for the very first time, In the Kitchen with Alain Passard is the first graphic novel to enter the kitchen of a master chef. Over the course of three years, illustrator Christophe Blain trailed acclaimed chef Alain Passard through his kitchens and gardens. With simple yet sublime drawings and thousands of colorful panels, this book gives the reader an inside, uncensored look at the world of Passard, who shocked the food universe in 2001 by removing meat from the menu at his celebrated Paris restaurant, L'Arpege, and dedicating himself to serving vegetables from his own organic farms. 96 pgs, FC, 7x9, $16.95
Lee: There seems to be a rash of food books out right now. Didn’t I pick 2 or 3 food books last month? Oh well, this is completely different because it’s about a professional chef. And, even if you’re not into organic or the vegan scene, you have to admit this still sounds interesting.
Thomm: Yeah, the other food books were different. I don’t know how interesting it is to follow a French chef as he putters in a garden and makes food out of it. Might be, but it also sounds like watching an AARP convention. 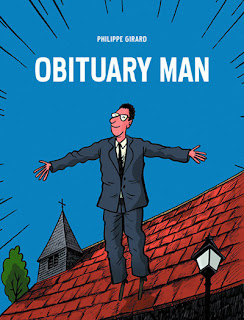 Conundrum Press
Obituary Man GN by (w/a/c) Philippe Girard
Behold: Obituary Man! A nondescript man who gains indescribable energy from reciting the eulogy at the funerals of strangers. He has never felt so alive! Maurice Petit is an unremarkable type who chokes on the weight of his routine. In the obituary section of the newspaper he discovers the name of an old classmate. At the funeral something compels Maurice Petit to stand tall and speak. For a moment he is Obituary Man and has a voice for the dead. But will his newfound power rejuvenate him or get him mixed up with the wrong crowd? 84 pgs, B/W, 6.5x8.5, $15.00
Thomm: Now that’s different. It’s a little vague on what his power is, but I guess it doesn’t matter all that much. Reminds me a bit of Pushing Daisies, a great show that only lasted a couple of seasons.
Lee: I'm really not sure what to make of this either.  But it's got a unique enough concept that I have to see what's it's all about.  And, Connundrum is one of the great indie publishers of Canada so I have faith it will be good. 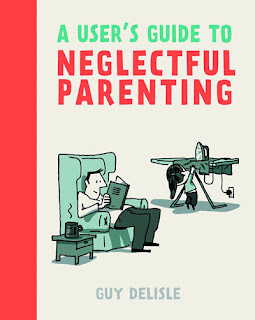 Drawn & Quarterly
User's Guide to Neglectful Parenting GN by (w/a/c) Guy Delisle
With A User's Guide to Neglectful Parenting, the dry humor that pervades Guy Delisle's landmark and praised graphic travelogues takes center stage. Quick, light vignettes play on the worries and cares any young parent might have, and offer wry solutions to the petty frustrations of being a dad who works from home. Readers familiar with Delisle's stranger-in-a-strange-land technique for storytelling will recognize the titular parent in this book; Delisle's travelogues were simultaneously portraits of complex places and times, and portraits of a stay-at-home dad's ever-changing relationship with his children while his wife is out working for Doctors Without Borders. The relationship between young child and all-too-irony-aware parent is beautifully done here, and Delisle's loose flowing style has been set free, creating a wonderful sense of motion throughout. A User's Guide is an intimate, offbeat look at the joys of parenting. 192 pgs, B/W, 5x7, $16.95
Lee: I can’t help but feel that I’ve picked this book before. Maybe not but even if I did, I still recommend it. There is too much good material about parenting for this not to be good. I am confident this is very, very humorous.Thomm: I think you have mentioned it previously. Doesn’t mean it’s not worth mentioning again. Wry humor is great humor.


The conclusion tomorrow
Posted by Lee at Thursday, April 18, 2013