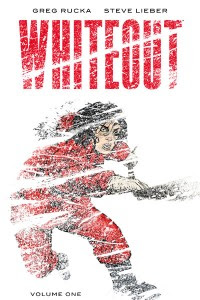 There's something very Frank Miller about the cover of this book.  Probably the use of black and white dominantly, with a bold red highlight.  Very Sin City.  That being said, Steve Lieber's art is entirely his own, not aping Miller at all.  Lieber employs considerably more detail and line work, as well as generally smaller panels throughout the book.

But let's jump back.  This one was a purchase for the simple reason that Greg Rucka wrote it.  Rucka writes great female characters, from Batwoman to Stumptown, so I had high hopes that this, originally published in 1998 and 1999, would be high quality.  Sure, it might not have been, being his first work in comics, but I was not disappointed.  Too bad the same can't be said for movie critics feelings about the movie made from the book.  Guess I'll pass on that.

The star of the book is Carrie Stetko, a US Marshall at the US base, McMurdo Station, in Antarctica.  She's been exiled there for killing a prisoner who had escaped his restraints, knocked out another Marshall (now her boss), and attempted to sexually assault her.  Yeah, sounds like an easy case of self defense, but Rucka and Lieber make it more ambiguous.  She probably could have returned him to custody alive and relatively unscathed, but instead strangled him.  With her bare hands.  Not to by f****ed with is Carrie.

The impetus of the story is that a 5 man exploratory team composed of 2 Americans, 1 Brit, 1 Austrian and 1 Argentine has left one dead body where its camp should have been but no longer is, and the other 4 gone altogether.  Being the only American law on the continent, and the deceased wearing a parka with an American flag on it, Carrie is told by her boss, who clearly would rather she be fired altogether, to solve the case within two weeks, which is when most of the people living on the continent will head home for the winter.

Lots more killings follow.  Along the way Carrie picks up the assitance of a female spook from the UK whose job it is to find out who is trying to smuggle mineral finds off Antarctica, which is banned by treaty.  The motivation for the murders Carrie is investigating is mineral but far more valuable than the run of the mill industrial minerals.

The plot isn't terribly tricky.  Rucka and Lieber aren't trying for that. 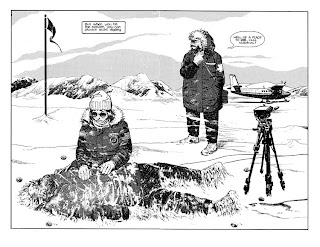 Within the first 13 pages they've already let the reader know that someone is in on the initial murder, without letting Carrie know.  There's no secret to the reader in finding out who did it.  There's some initial slight of hand about who the dead guy out on the ice was, as his face and fingerprints are missing, but figuring out who it isn't and eliminating the other possibilities doesn't take long.  Their bodies keep piling up.  Rucka and Lieber pack a lot of story into what was originally a 4 issues tale.

The adventure in the story is learning about Carrie and going through her travails in solving the crime.  This is no simple case of a mental challenge to the detective, or even some light torture as many stories are wont to subject their hero.  Carrie loses 2 fingers on her right hand to the gangrene caused by the cold when the killer cuts her guide line during a blinding snow storm.

But aside from what she has to endure physically, Carrie is an interesting character.  She was sent to Antarctica as a punishment but has come to love the place.  She has no desire to leave and can sympathisize with a friend who is scheduled to rotate out.

Of course, in the heavily male population of the Antarctic stations she's viewed as an object of lust, dosed with a healthy amount of fear from the knowledge of her ability to handle herself and not give ground to intimidation.  Even in parkas some of these guys manage to ogle women as though they were in string bikinis.  Naturally, they also accuse Carrie of being a lesbian, as if that were a crime or failing.

Now that I've enjoyed this volume I'm looking forward to locating the second, Melt.
Posted by Thomm at Friday, April 26, 2013