A belated (by one day) Happy Birthday to Lee. I believe he is turning some really old number this year. Of course none are older then me, but still Lee is old, old, old. Happy Birthday buddy.

So my love for DC has turned into almost distaste for them. Rejected love can be brutal. I have cut way back on DC books but this week I did pick up eight books, but when this group comes out again it will be less then that. 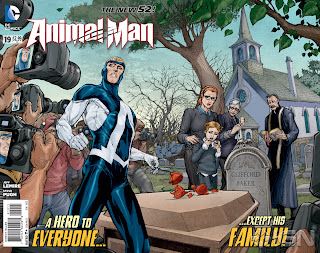 Animal Man #19 by Jeff Lemire and Steve Pugh was a good issue. In one issue we see that the death of Cliff has made Ellen decide she is done with Buddy and it appears like his marriage is over. Buddy goes to confront the Red about losing his son and is dismissed and cut off form the Red and is now back to being just Animal Man. This is all about setting up a new status quo for the series after it has been rocked by a major change, the death of Buddy’s son. I’m curious enough to want to come back for more. A quick note the gatefold cover was just out and out stupid. If nothing else this issue was a good jumping on point.

World’s Finest #11 by Paul Levitz, Ken Lashley, Robson Rocha and Barry Kitson. This is another gatefold cover that was a waste and could have been done without the gatefold. Why DC thought these would be a huge selling point is beyond me. Half of the joy of this book was the great artwork by Mike McKone and George Perez, neither of these artist are on the book. I usually love Barry Kitson but his work seemed weak or perhaps rushed as we have three artists this issue. Eleven issue in and the status quo has not been set. I guess the status quo is they are trying to get back home and are running into Darkseid agents on this Earth. Again my fondness for who these characters used to be is overriding my better judgment. 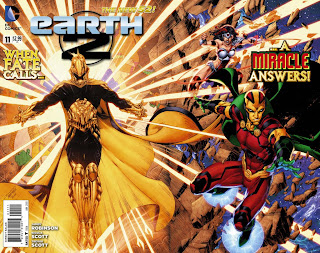 Earth 2 #11 is by James Robinson, Nicola Scott and Trevor Scott. Lately I have dropped the inker credit in my write ups as most people don’t care about the inker. You should as that is the work we actually see on the page. A good inker enhances what the artist does without overpowering it. Trevor’s work is making this Nicola’s best work. The art in the book is fantastic. Robinson’s writing and the design of some of the costumes is not cutting it. I have given up that we will ever see a new JSA unless it is a second book to be added later. Instead this series is apparently going to be a long introduction of the new versions of the Golden Age characters. I can appreciated that we are coming in on the ground floor but with only one issue a month all of these new characters are going to take forever to develop. This stupid gatefold cover shows a new Dr. Fate and the fold out shows I laughed as the book itself nodded to Miracle Man with one page and the rest of the story was about the new Dr. Fate. Robinson’s writing on this title feels very old. He labors with long exposition as his characters talk to each other as they did in comics of old. Wotan decides to give Jay Garrick’s Mom a long winded origin story. It is only my fondness for the original versions of these characters and great art that keeps me coming back. When and if a group comes together is a mystery to me at this point. 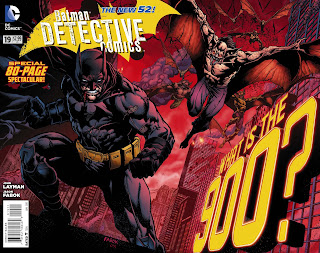 Detective Comics #900, er #19 by John Layman and a host of artists. This book is an example of all that is good and all that is bad with DC. First off it is a stunt to call the story the 900. It is a nod to the original numbering on Detective Comics as this would have been the 900th issue. DC is so removed from the legacy of the company that they will not even do the new normal in comics and revert back to the original numbering. A comic book numbered 900 is shows some damn impressive staying power. John Layman crafts some good stories and makes this about a man bat virus turning the resident of a building called the 900 into Manbats. We have some additional stories that tie into the ongoing story that John has been laboring to do under the mandates of Death in the Family tie-ins, this stunt and the Death of Robin. Underneath it all John has been building a great story about the Emperor Penguin taking over the Penguin’s operations and the Penguin planning a counter attack. Stuck in the middle will be Batman trying to stop the whole thing. For an 80 page book Layman did the bulk of the writing and it all played into his story. What I hated about it was how DC redid the whole Man Bat origin. I never know anymore what has or has not happened. It is maddening because characters will refer to the past like we know what happened. I have no clue what is or is not the history of these characters. Also the idiotic outcome of Death of the Family continues as the heroes are all having hissy fits and won’t talk to Batman because he did not tell them everything that was going. Grow up people; this is not how true heroes would act. Forgive, learn, grow and move on remembering this is the man who would do anything for anyone of them. If you are not invested onto the old DCU as much as I am I’m sure this was a great issue. For me it was good, not great and I kept wanting to see the actual story poor John Layman is fighting to tell under the weight of editorial whims.

Stormwatch #19 by Jim Starlin and Yvet Guichet was a clean miss and is now off my list again. I love Starlin but the book was pure crap as he created a group that had some members from the old Wildstorm days, some new stuff, a pilot rip off from Farscape and some very weak artwork. 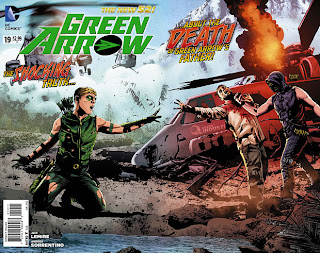 Green Arrow #19 by Jeff Lemire and Andrea Sorrentino is a pretty book. It looks good, it is told almost entirely as a flashback to Ollie’s fight versus Komodo. Annoyingly inside the flashback are flashbacks to Ollie’s time on the island. Another annoying thing is Andrea is drawing Ollie to look like he is about 19 years old. A third annoyance is Shado is reintroduced as a 13 old daughter of Komodo who out duels Ollie with a bow with ease. As the hero who is suppose to be one of the greatest archers in the world, he appears to be only in the top twenty based on how many foes he has who are better then he is at archery. In fact since I have only picked up the book again since Lemire took over Ollie has yet to beat anybody. Yet with all of that I’m still encouraged as it appears Lemire is rebuilding Green Arrow from the ground up and I have hopes he can be a cool hero.

Last is Dial H #11 by China Melville and Alberto Penticelli. Why I got back into this series is beyond me. I’m lost as to what is the central plotline, yet at the same time I’m enthralled with the comic on some level. I have to drop it because I get too many books to worry about a comic that demands to be read as a trade. is not Grant Morrison, who has built up so much credit in my bank that I will often follow his books on a monthly basis even when they are not strong as a chapter inside of a larger story.