Lee: Dark Horse really hit it out of the park this month. They have more, lots more, than just Star Wars and video game tie in’s! I’m excited.Thomm: Dark Horse has been using DHP as a platform for launching new titles, and it seems to be working well. I know I’m reading a couple, at least. 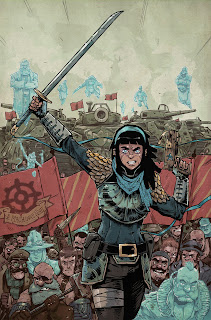 AMALA’S BLADE #4 (of 4)
Steve Horton (W) and Michael Dialynas (A/C/Cover)
FC, 32 pgs, $3.50
Master assassin Amala uncovers Prince Markos' plan to reignite civil war between Modifiers and Purifiers! Can she stem the tides of war? What is the deadly secret her mother carries? And will Amala face her long-lost destiny? "This is female-led swashbuckling fun for the whole family."–Comic Book Resources Visit the artist here.
Lee: It’s #4 of 4 so I’m really late on this pick but it bears mentioning. Even though the hype is very generic for a last issue the cover looks great. Since that’s all I really have to justify this on… I say it’s worth looking at on the stands. And, after some minor research (check out the link) Dialynas’s art looks good. It’s too late for me to get the series but I’m good for the trade.
Thomm: Not enough for me. Is Jim’s rating system infecting the rest of the blog now? 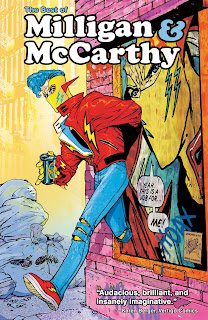 THE BEST OF MILLIGAN & MCCARTHY HC
Peter Milligan (W) and Brendan McCarthy (W/A)
FC, 264 pgs, $24.99, HC, 7 3/4" x 11"
One of comics’ most fruitful collaborations gets its due in this deluxe collection of hard-to-find gems from Peter Milligan (Hellblazer, X-Statix) and Brendan McCarthy (Judge Dredd, The Zaucer of Zilk There is still nothing else like Freakwave, Paradax!, Skin, and Rogan Gosh, and this volume is the ideal starting place for new readers! Collecting twenty years’ worth of the pair’s finest work from Vanguard Illustrated, Strange Days, 2000 AD, and Vertigo. Rare classics of action and satire with brand-new restoration and commentary!
Lee: AWESOME! McCarthy is an excellent, excellent artist so this is a must buy for me. For those that care about story (Thomm) this is early Milligan so it’s definitely odd. Still a ton of fun but very odd.
Thomm: Milligan is odd but entertaining. It’s less “look at me” than Morrison, as far as I’m concerned. 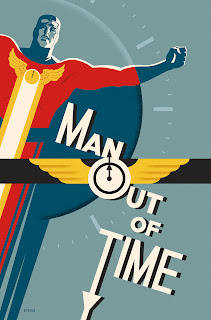 CAPTAIN MIDNIGHT #1Joshua Williamson (W), Fernando Dagnino (A), Ego (C), Felipe Massafera (Cover), and Paolo Rivera (Variant cover)
FC, 32 pgs, $2.99, Ongoing
On the run from the US government after fleeing custody, Captain Midnight has been labeled a security risk. In the forties, he was an American hero, a daredevil fighter pilot, a technological genius . . . a superhero. But since he rifled out of the Bermuda Triangle into the present day, Captain Midnight doesn’t know what or who to trust!
• A key title in Dark Horse’s new superhero initiative!
• Written by Joshua Williamson (Masks and Mobsters, Voodoo, Uncharted) with art by Fernando Dagnino (Resurrection Man, Suicide Squad)!
Lee: Maybe DH has been inspired by Valiant’s success but DH should stick with what they do best and stay away from superheroes. Valiant at least had name recognition, Captain Midnight is just a 2nd (or 3rd) tier 40’s hero who has fallen into common domain. I think Williamson and Dagnino are a great team but they really have their work cut out for themselves.
Thomm: This is one of the books that got its start in DHP. I liked it enough there that I’ll be checking out the first few issues. If Black Beetle is any indication, Dark Horse is making a good run at the super hero ‘verse. I don’t know Williamson and Dagnino that well, but if they’re a great team then all the more reason to give this a look. 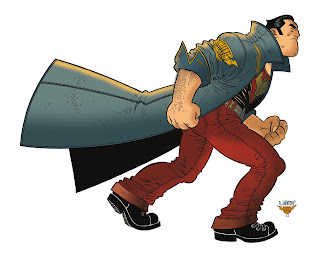 CATALYST COMIX #1 (of 9)
Joe Casey (W), Dan McDaid (A), Ulises Farinas (A), Paul Maybury (A), Brad Simpson (C), and Rafael Grampá (Cover)
FC, 32 pgs, $2.99
Straight from the glory of Comics' Greatest World, Frank "Titan" Wells, Amazing Grace and the Agents of Change are back, baby! But you've never seen them like this! Superhero comics get a back-alley facelift as these very different champions confront cosmic threats and personal demons—and it all starts at the end of the world as we know it!
• Wraparound series covers from Rafael Grampá, Paul Pope, and Brendan McCarthy!
• Artists Dan McDaid (Doctor Who), Ulises Farinas (Glory), and Paul Maybury (Aqua Leung)!
Lee: Casey seems to be on a roll lately and you either love it or hate it. The artists are all great. The cover artists are all great. There’s no reason this shouldn’t be great.
Thomm: Casey’s “Sex” and “Bounce” are both off to very good starts. Off the beaten path superhero stories seem to be his thing right now, and this falls in that realm. Worth a look. 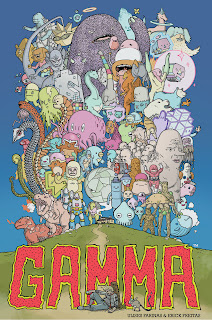 GAMMA
Ulises Farinas (W/A/Cover) and Erick Freitas (W)
FC, 32 pgs, $2.99, One-shot
Dusty Keztchemal is a pathetic coward. He failed the entire planet, and now, the only way he can make a living is by getting punched in the face for money. But when a beautiful stranger wanders into his saloon looking for help, Dusty thinks he can conjure up the man he once was—the greatest monster trainer in the world! The first original story from Catalyst artist and rising star Ulises Farinas (Transformers: Heart of Darkness, Glory)!  Visit the artist here.
Lee: It’s all about the art because the story sounds dumb.  But, I have to say that I am intrigued.  I mean, I did snicker when it said he could only make money by getting punched in the face.  I've had (figurative) jobs like that so I can relate.
Thomm: It better be about the art because otherwise it sounds like an adult version of Pokemon.  Was it the jobs that were figurative or the punches in the face?  I’d guess the punches in the face were real and you just imagined you had a job. 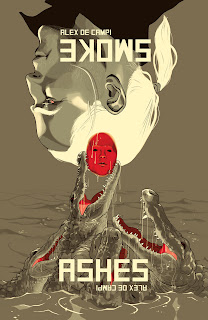 EISNER NOMINEE FOR BEST LIMITED SERIES!
SMOKE/ASHES TP And LTD. HC
Alex de Campi (W), Igor Kordey (A), Carla Speed McNeil (A), Bill Sienkiewicz (A), Richard Pace (A), Colleen Doran (A), Dan McDaid (A), Len O’Grady (C), and Tomer Hanuka (Cover)
FC, 424 pgs, $29.99, TP, 7" x 10"
FC, 424 pgs, $59.99, Ltd. HC, 7" x 10"
Reporter Katie Shah’s exposés of the corruption of the English ruling class put her in the crosshairs of powerful men on a good day. Smoke and Ashes tells the stories of the bad days, as she and assassin Rupert Cain become targets of a sinister cabal bent on controlling the nation’s oil and of a psychotic intelligence that has uploaded itself onto the Internet!
Lee: I love Eisner nominees and this is one is filled with great art to boot.  There aren't many sure things in comics but I've never read a bad EIsner nominated book.  That alone is enough for me.
Thomm: I might get this just for the Sienkiewicz art. He’s one of the few who I make an effort to see, and, really, it’s been a long time since I’ve seen any.

Thomm: A very good month indeed. Along with Image, Dark Horse has the best stuff coming out right now. I thought I might have considerably less superhero reading with the demise of my interest in most things from DC and Marvel, but Dark Horse is stepping up with some good new books.
Lee: I've been over in indie land for years.  The only problem is once you settle in, it gets harder and harder to care about the big 2.