It is fun seeing Kieron Gillen writing something so extremely different from what seems to be his norm. First off I have never been a great fan of his work. What I have read was good, but it was never 100% to my taste. With such a wide and heavy number of books I get he often gets cut. Still everything I have read has been very readable and well structured. 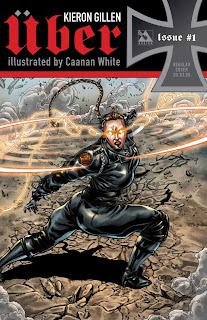 Uber #1 according to the back matter was written two years after Uber #0 and it shows. Uber #1 is a superior book to Uber #0. Zero suffered from trying to establish too many things at one time. The base story line is WWII did not end with the Battle of Berlin because the Nazi’s managed to develop and unleash a group of super soldiers that turned the tide. This issue picks up after the Nazi’s have won that battle.

It starts with Hitler about to blow his brains out when he receives news they have won the battle. We jump around and find out Churchill is crushed by the news. There is hope as has a spy that has been part of what the Nazis have been doing. She succeeds in blowing up production of the drugs that are making super humans and is trying to make it to . The Nazis are reveling in their glory and some are wondering what they have unleashed. The atrocities of WWII just got ratcheted up a level as we watch a super soldier slaughter POWs.

Where zero was uneven, this issue set up the premise and gives us a divergence point as we now build the alternative reality. These stories, when done well, are always fun and I believe a writer named Harry Turtledove has made a career out of this type of stories. Someone let me know if any of his stuff is worth reading.

The art is not the strongest. Caanan White has not made his entire cast distinctive enough. Perhaps it is the uniforms that are causing some of it as I’m not 100% sure which German general is which. I feel that the art is at times muddled by the heavy handed coloring, but that maybe to cover artistic flaws. I always feel a little bad criticizing any artist because I can’t draw at all, but I know what I like and don’t like. White’s work is on the bottom end of acceptable, but in the end does convey the story.