My son went along with me to FCBD this year.  Cards, Comics and Collectibles in Reisterstown made a real event of it, having a local radio station broadcast from there for some time and having several creators in to sign autographs.  I'm not a big autographs guy, and I already buy things very regularly, so for me it was just a foray for the free books.  While my son only got a Sonic the Hedgehog book I found several things of interest and a few that were just a flier.  Here's how they stacked up. 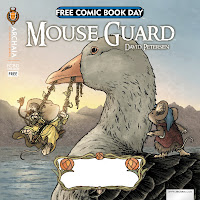 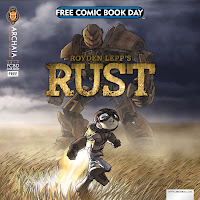 1. Mouse Guard/Rust - A new story by David Petersen is always going to do well with me, even if it's half of a free book.  Archaia did the old trick of printing half the book upside down, relative to the other, to separate its two stories, aka a flip book.  The other story was Rust by Royden Lepp.  I don't know anything about Rust but it was a nice self contained story about a world with at least one functional jet pack and a dilapidated robot.  It was more about the relationship of two kids with a somewhat suspect older kid.  The Mouse Guard story was a fable of sorts about a perfect woman's search for a husband.  It was both a warning to its listener and a celebration of love and persistence.  There were a few shorter stories, too.  One was Jim Henson's Labyrinth, which didn't do much for me, while the other two were Flip and Bolivar, both of which I enjoyed for their child centered insights.

2. Atomic Robo - Red5 gave us a new story, too.  In fact, this story seems like it might be important in future stories of Atomic Robo.  It sets up a test run of Robo's capabilities that likely will be used against him in the future.  On the plus side, too, was that the usual creative team of Clevinger and Wegener told the story.  The second story was Bodie Troll by Jay Fosgitt.  It was cute.  It's a prelude to the first issue of a new series of the same name.  It reminds me of something else I can't quite put my finger on.

3. The Stuff of Legend/Gossamyr - Th3rd World Studios featured its best known work and another work that looks interesting.  The Stuff of Legend story was largely a summary of what's happened to
this point and served to remind me that I need to get the third trade.  It was very effective in bringing someone unfamiliar up to date with the story and likely served its purpose of getting readers to buy the trades.  Gossamyr did the same sort of thing.  I don't know that story at all, but it looks interesting.  More than the story, the art is arresting.  An art guy like Lee should love that book.

4. Marble Season - This is a teaser for a new Gilbert

Hernandez book from Drawn and Quarterly.  If you like Love and Rockets or any of the other vast catalog of Hernandez brothers work, you'll like this.  It's a neighborhood story centering on kids' perspectives.  While many of the previous Hernandez stories centered on female characters, this follows boys, though there are girls in the story, too.  As usual, it doesn't take long for characters to be well developed.  According to the end notes, the book will be semi-autobiographical.  There's also an afterward by Corey K Creekmur that's supposed to contextualize Marble Season in Gilbert Hernandez's career.  It's several pages of text and I stopped after the first, which mostly consisted of Creekmur complaining about ongoing media characterizations of comics as a kids' medium and the incessant shocking discovery of non-kids' comics.

5. Prince Valiant in the Days of King Arthur - Fantagraphics used the occasion to promote its ongoing re-prints of the newspaper strips.  The two stories in this FCBD edition are from 1950.  I read Prince Valiant as a kid, long after Harold Foster had stopped being the creative force in the strip.  It was ok, but these are much more interesting.  Great art, too.   I like the small print on the first page, which explains that panels have been moved, edited or omitted for the FCBD issue but "of course" the full strips will be in the collections.  Love that "of course".

surprised by it, honestly.  My Dynamite purchases have been limited to things written by Matt Wagner and so many books with a title like Damsels are likely to be light on plot and high on T&A that I largely ignore them.  This was not.  There's a good, strong plot, which in retrospect is no surprise because Matt Sturges wrote it.  There's no T&A to it, either.  It worked well as a teaser for the ongoing book.  Now, the second half was some sketches form the first issue, which worked intriguingly without dialog, and a regular Damsels partial story, which I think I read somewhere else because it seemed familiar.  That wasn't terrible but I didn't care enough to get more.

7. The Walking Dead - I was probably most disappointed by Image's choice for FCBD.  The stories are all good, but only one is new.  The Michonne, Morgan, and Governor stories have all been published previously.  What I don't understand is why Image limited itself to a weak promotion of its most successful product.  Sure, the new Tyrese story is good for those of us who have read all the other stories, but this isn't going to draw in new readers to The Walking Dead and the whole thing just leaves all the other Image titles out in the cold.  Image wasted paper, in my opinion.

8. The Steam Engines of Oz - Arcana chose to work the Steam Punk angle,
which in this case appears to be a curious welding of the steam punk genre to the Oz mythos.  Nothing like some free intellectual property to work your angle.  I found the story confusing because I have no idea what any of it had to do with Oz other than the heroine being some sort of steam punk grease monkey in Oz.  There was an evidently wicked witch of the north with flying snow monkeys which has some tangential familiarity to the Baum stories.  I guess this whole thing is set well after Dorthoy's visit because the Tin Man now runs Oz and the Scarecrow is MIA.  Neither of them were actually seen in the story, though.  This isn't going to bring me in to reading more Arcana.

9. Fubar - Zombies.  Why are zombies fubar, though?  For those unaware, fubar is military slang for f****d up beyond all recognition.  The five stories from the publisher of the same name are all set in different military actions when out of nowhere zombies start attacking.  A couple of the stories use historical figures, such as George Washington at Valley Forge and Edward R Murrow in London during WWII.  The only creator name I recognized here was Chuck Dixon, who wrote a piece about Black Jack Pershing hunting for Pancho Villa and finding zombies instead.  Other than the military and zombies I couldn't figure out any theme.  There was no reason for the zombies to be in any of the stories.  They just show up randomly.  There's not enough character development to have any attachment for any of the people being attacked.  This seems like just an excuse to have some fights with zombies.

brought us a teaser of a L'Amour book that's being turned into a graphic novel.  The art by Thomas Yeates is great.  The story is probably great in the larger graphic novel, but here there's not enough to get a handle on it.  Mostly we're looking at a guy wanted for murder who's on the run and being tracked into the desert by a posse.  The native tracker in the posse appears to be helping the man he's supposed to be tracking.  No idea why. The second teaser is for another graphic novel called The Web.  What we get is a sort of Mysterious Island set up.  Ther art's not on a par with the Yeates art in the L'Amour story.  I had a hard time following at different points.

11. Valiant Masters - I mostly picked this one up because of the reviews of the Valiant line by my cohorts in recent weeks.  This issue has stories about Ninjak, Shadowman, Eternal Warrior, and Rai.  I wasn't impressed with any of them.  They all had a quasi-mysticism to them, even the sci-fi Rai set in some distant future.  Maybe it would have helped to have only two stories with more presented to give some context and story.  I just had little interest in what was happening in these stories.
Posted by Thomm at Wednesday, May 08, 2013