In a recent look at previews, Lee and I mentioned Watson and Holmes from New Paradigm Studios.  I'm something of a Sherlock Holmes fan and thought the preview held out some potential for a good book.  The nice folks at New Paradigm decided to send me copies of the first three issues to review.

I'm happy to say the book does very well with the concept.  It's not easy to come up with a lot of new in this milieu, what with the characters being in the public domain and lots of people taking a turn at them.  Even TV, with Sherlock and Elementary, have done so.  In fact, both shows do what this book does in moving Holmes and Watson into the current era.

And yet, each is distinct and entertaining in its own different way.  Sherlock is the closest to the original with its setting in London and Watson having been injured while serving in Afghanistan.  Elementary moves the story to NYC and makes Watson both female and American, with no back story in the military, let alone Afghanistan.  Watson and Holmes is set in Harlem with both being Americans, although Watson's service in Afghanistan is retained. 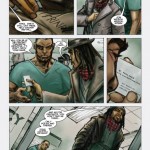 Written by Karl Bollers and drawn by Rick Leonardi, Watson and Holmes jumps right in.  There's an opening sequence in the first two pages that likely has no relevance to the rest of the story beyond setting up Watson to take action when he later comes across Holmes.  Regardless of its relevance, it's a poignant series of panels.

Watson is an intern in a hospital, though Holmes insists on introducing him as a doctor wherever they go.  The main story is about a kidnapping that leads to a group of mercenaries with connections to Afghanistan and a very poorly thought out drug operation.

The book moves fast and covers a good three boroughs of NYC in the first three issues.  By the end of the third our protagonists have located the man running the drug scheme and are stuck in a corner with him while the mercenaries are hunting them and him.  I'm certainly looking forward to the fourth and final issue in the miniseries that launches this series.

Bollers throws in some nice touches that reference to the source material.  In addition to Mycroft (who
prefers Mike), the inestimable Mrs Hudson appears, as well as a modern version of Inspector Lestrade, who seems considerably less inept than the original, and the Baker Street Irregulars.  The language Bollers uses is that of 2013 Harlem, yet he manages to have Holmes say "The game is afoot" without it sounding anachronistic.  That's a good, skilled touch. 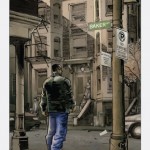 A large part of the enjoyment is the Leonardi art.  He has a great style that fits the rough and tumble, almost noir, setting exceptionally well.  The PDFs that I read were of the on-line, noir version, in fact.  These are just the pencils without inking or coloring.  The print version is going to be in color.  I don't know that color improves the art any.  This is art that doesn't need ink or color.  In the course of working on this post I printed a few pages from the PDF.  Strangely, I liked the appearance of the art on a printed page even better than in the PDF.  All the more reason to buy the print version.

Hopefully this will be a successful launch.  New Paradigm plans a series of one shot issues after the initial miniseries is completed.  Among the writers planned for those are Chuck Dixon and Larry Hama, as well as one by Bollers.  I'm really looking forward to what Dixon will do with these two iterations of the characters.
Posted by Thomm at Thursday, May 30, 2013