This is a cheat as it came out last week, but what the heck. I wanted to review some good number one issues and did not want to pass up a chance to talk about this one.

The first think that strikes me is seeing Mike Carey writing for BOOM Studios. I know Waid wrote for them, but after he was their EIC for awhile. Carey has done a lot of work for Marvel and Vertigo so it was surprising to see him show up at BOOM. I’m curious as to the ownership of the story and other background details. The one thing this points out to me is that more and more the choice of creators is not just Marvel or DC. 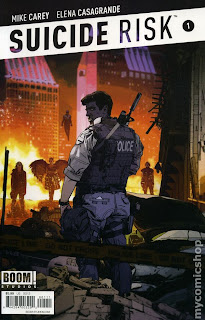 Suicide Risk #1 was interesting. Our point of view character, Leo, is a normal police officer in a world where super powers have been cropping up more and more. Also the good guys seem to become bad guys rather quickly.

We start with a robbery or something and a large group of police are trying to stop the bad guys. Almost ever police officer dies except for Leo. He is given time off and told to get a psyche evaluation because of the extreme nature of what he had been through. Before heading home he finds a clue about how people are getting their powers.

When we get to his home life it was refreshing to see that his wife’s heritage is from and it is not a part of the story, it just is. I enjoy that a writer can build in levels of diversity without it feeling forced in any way shape or form. Leo is helping to celebrate his son’s birthday. We see he is struggling with what happened and the clue about how people are getting their powers.

Leo decides to take a meeting with the people from the clue he had developed. When meets with them there is a dispute. Still he is granted a shot at getting powers and promptly seems to die. I hate that; the main character can’t die in issue #1, so don’t even try and sell me that bullshit.

Outside of that Carey has set up a great premise. A normal world suddenly goes nuts with super power powered people showing up. Even the good guys are going bad. A strange couple is granting powers to certain people for money. Leo looks like he will become a super powered person. Who is this couple? Why is this happening? Will Leo remain a good guy? How will this affect his family and more questions? It was a very good start and has me signed on for the series. I hope it is a limited series, but it can be a long limited series.

Finally the art by Elena Casagrande is decent. It was not awe inspiring and I’m not looking to own any of the pages, but it told the story very well and conveyed the emotions of the characters. She also kept the people relatively distinct. A professional job that did not hurt the story.