I bought this HC in no small measure because Dean Haspiel was the artist.  I know, I'm usually a story guy, but sometimes an artist can be the swing on a purchase, kind of like how affirmative action is supposed to give that little nudge to the candidate from the historically societally limited category of people when two otherwise equal candidates are under consideration.  I've been familiar with Haspiel's work since the Sienkiewicz days on New Mutants and Elektra: Assassin and Simonson's Thor, one of the greatest runs in ongoing comics history.  That being said, I had read anything he'd drawn in a long time.

On the other side of things, I knew nothing about writer Jonathan Ames.  Still, Brian K Vaughan gave it a glowing review, and I'm very confident in his abilities as a writer and ability to recognize the talents of other writers.

Boy, is this some piece of work.  It's presented as a fictional story of Jonathan A, a writer who's a mess.  Published by Vertigo in 2008, this is Ames's first foray into a comics format, or graphic novel as it's called in this higher brow presentation.  Whether it's in any way an accurate depiction of his life isn't relevant.  It's a hell of a story.

By the time he's 15 the writer is an alcholic.  He's a binge alcoholic, 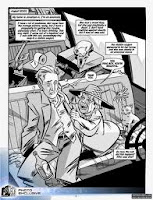 Jonathan A is not just an alcoholic, though.  He also periodically partakes of various illicit drugs, usually if someone else invites him, rather than at his own instigation.  He's also pretty sad in his relationships.  He's largely heterosexual but has some near encounters with men that leave him confused.  As with the drugs he doesn't instigate these encounters but goes along with other people's suggestions. 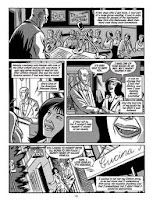 Jonathan A is a weak man, is what it boils down to.  He lives an independent life as a writer but is not in control of himself or his life in the least.  He bounces from one thing to another at the whims of circumstance.  Now, we all are subject to the whims of circumstance.  A strong person remains committed to his own principals, unless there's some significant reason to revise those principals.  Jonathan A doesn't have any principals to maintain.

Despite, or maybe because of, his weakness, Jonathan A is a very interesting character to follow.  He's a lesson in how not to live a life happily, and it has nothing to do with some abuse in his childhood.  He just makes bad decisions or no decisions at all.  Ames doesn't shy away from that.  There's no happy ending.  Jonathan A is still on the cusp of a bad decsion even as we leave him after having gone to some deep depths and rising out of them, at least to some degree.
Posted by Thomm at Wednesday, May 08, 2013