Indie Previews for July Part 3 of 3 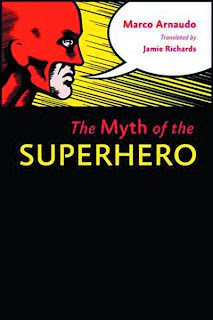 Johns Hopkins University Press
Myth of the Superhero SC by (w) Marco Arnaudo
Superheroes embody the most positive and inclusive aspects of American culture. Through a series of close readings of DC and Marvel comics, Marco Arnaudo examines the religious and mythological elements of superhero comics and uncovers the influence of the classical epic and the Baroque style on the genre. Arnaudo asserts that, amidst the exciting action, tender love stories, and tales of self-sacrifice, superheroes are role models for tolerance and moral decision making. The Myth of the Superhero looks beyond the cape, the mask, and the super powers, presenting a serious study of the genre and its place in a broader cultural context. 224 pgs, 6x9, $24.95
Lee: I’m impressed that more and more people are doing their thesis on superheroes. That’ pretty cool. I wonder how this compares to Gwen’s paper on the same topic. Dude probably stole it from herthomm: I wonder how many recent comics were read. Not a lot of heroic in the current crop of books. 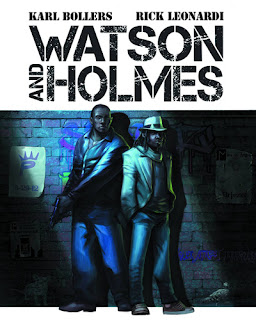 New Paradigm Studios, Co.
Watson and Holmes #1 by (w) Karl Bollers (a/c) Rick Leonardi
Sir Arthur Conan Doyle's Sherlock Holmes and Dr. Watson are re-envisioned as African-Americans living in present-day Harlem. Watson, an Afghan war vet, works in an inner-city clinic; Holmes, a local P.I., takes unusual cases. When a case ends up in Watson's ER, the unlikely duo partner up to find a missing girl and fall into a labyrinth of drugs, guns, gangs and a Murderous conspiracy. 32 pgs, FC, $2.99
Lee: Bollers is a good enough writer but the real draw here is Leonardi. I’ve always loved his art and it’s good to see him back in print. Other than that, it sounds like standard crime noir stuff.
Thomm: This really speaks to how great a writer Doyle was. There are so many variations on this mythos right now. CBS has Elementary. PBS has Sherlock. Now Watson and Holmes from Bollers and Leonardi. Each one is set now. If Watson and Holmes retains the essential characteristics of the two characters, I’ll be enjoying this book as much as I enjoy the two shows. 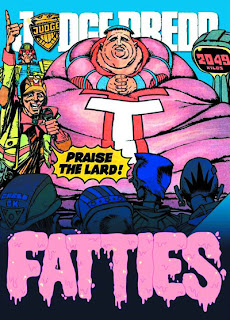 Rebellion / 2000AD
Judge Dredd: Fatties GN by (w) Alan Grant (a) Carlos Esquerra (c) Cam Kennedy
In the nightmarish world of Mega-City One, a majority of the citizens are unemployed. Boredom drives many of these people to invest their time in a variety of hobbies, including eating. As a result, a new subculture of gluttonous gargantuans have emerged. Nicknamed fatties by the other citizens, these blubbery boys and girls compete in the Intercity Eating Championships to be the biggest and best citizens to ever use a bellywheel. This is the first time the complete set of Fatties stories have been brought together under one cover - if one cover can hold them! 128 pgs, FC, 7x10, $19.99
Thomm: I… got nothin’. Ok, next to nothin’. My first impression is it’s a book by the 53% who will bring bloody vengeance to the takers of the world, in true Dredd fashion. Is it aimed at the talk radio set?
Lee: Speechless?  You???  No verbiage at all?  Wow.  This must be a first.  It's more "classic" Dredd.  I am sure it will be fun and the cover really is great. 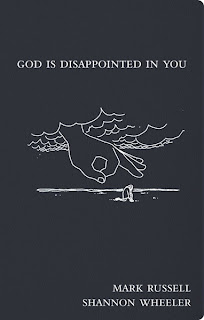 Top Shelf Productions
God is Disappointed in You HC by (w) Mark Russell (a/c) Shannon Wheeler
God Is Disappointed in You is for people who would like to read the Bible - if it would just cut to the chase. Stripped of its arcane language and its interminable passages of poetry, genealogy, and law, every book of the Bible is condensed down to its core message, in no more than a few pages each. Written by Mark Russell with cartoons by New Yorker cartoonist Shannon Wheeler, this is a frequently hilarious, often shocking, but always accurate retelling of the Bible, including the parts selectively left out by Sunday School teachers and church sermons. Irreverent yet faithful, this book features rounded corners, gilded edges, and a cloth bookmark. 192 pgs, B-W, 5x8, $19.95  See a 7 page preview here.
Lee: I love this for the title of the book alone! Wheeler is the excellent cartoonist with a great sense of humor. Now it’s up to Russell to hold up his end of the bargain and condense the bible. I am really, really tempted because I’ve never made it through the entire Bible. Tried, but never succeeded. Let’s put the warning on this now, if you didn’t like The Brick Bible (Matthew!) then you probably won’t like this.
Thomm: Oh, I can’t wait for this. I have read the entire Bible so I can’t wait to see how this distills it. I want this enough that I’m going to order it, a rarity indeed for me. 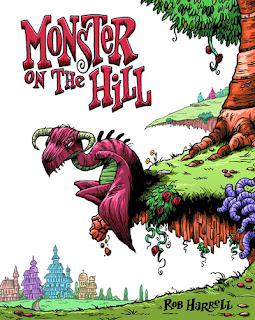 Top Shelf Productions
Monster on the Hill GN by (w/a/c) Rob Harrell
In a fantastical 1860s England, every quiet little township is terrorized by a ferocious monster - much to the townsfolk's delight! Each town's unique monster is a source of local pride, not to mention tourism. Each town, that is... except for one. Unfortunately for the people of Stoker-on-Avon, their monster isn't quite as impressive. In fact, he's a little down in the dumps. Can the morose Rayburn get a monstrous makeover and become a proper horror? It's up to the eccentric Dr. Charles Wilkie and plucky street urchin Timothy to get him up to snuff, before a greater threat turns the whole town to kindling. 192 pgs, FC, 7.25x9, $19.95 Visit the artist here and read a 8 page preview here.
Lee: Don’t kid yourself this is most certainly an all ages book. Although I am pretty certain the cover gave that fact away. Since I already have books for Girl and Boy on the list, maybe I shall get this one for Tiny. There’s no reason kids should be without their comics.
Thomm: Very cute. Not my cup of tea, probably, but cute. Then again, I really like Snarked! so who knows? 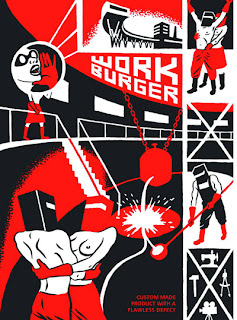 Workburger International Comics Anthology GN by (w/a/c) Stripburger
The Workburger International Comics Anthology features stories from 50 world-renowned artisans of the comics medium. This skillfully woven patchwork of diverse comic narratives revolves around the topic of contemporary work. Contributing artists have tackled this elusive term, bridled its creative momentum and harnessed its vast, explosive potential - one of work's most useful and dangerous characteristics. Honorary members of this ad-hoc union are Akinori Oishi, Anna Ehrlemark, Capucine Latrasse, Danijel Žeželj, Jyrki Heikkinen, Lars Sjunnesson, Marcel Ruijters, Matti Hagelberg, Arkadi, Max Andersson, Peter Kuper, and many more. Cover by Igor Hofbauer.  224 pgs, B-W, 9.2x6.7, $20.00
Thomm: Doesn’t artisan mean someone or a method that uses traditional methods? Does the blurb mean that none of the creators use a computer? Very distracting, considering I generally like anthologies. In the end, I have no idea what’s in this anthology.
Lee:  Do you ever really have an idea what you're going to get with these anthologies.  In this case, I am trusting the editors at Top Shelf to give me some good stuff.  The art by Danijel Žeželj alone is worth the price. 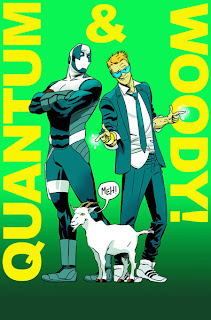 Valiant Entertainment
Quantum And Woody #1 (Pullbox Martin cover) by (w) James Asmus (a) Tom Fowler (c) Marcos Martin
Writer James Asmus (Thief of Thieves, Gambit, The End Times of Bram And Ben) and artist Tom Fowler (Venom, Hulk: Season One) punt the world's worst superhero team headfirst into the Valiant Universe! Once upon a time, Eric and Woody Henderson were inseparable. Adopted brothers. Best friends. Brilliant minds. Years later, they are estranged siblings, petty rivals, and washed-up failures. But when their father's murder leads them into the throes of a life-altering scientific accident, Eric and Woody will find themselves with a whole new purpose - and a perfectly legitimate reason to wear costumes and fight crime. Go big or go home, folks! Quantum and Woody are coming! And the action-packed, zeitgeist-shredding exploitation stunt comic you demanded is here at last. (And, yes, there will be a goat too. Eventually.) 32 pgs, FC, $3.99
Lee: Q and W is one of those series that I wasn’t ready for when it first got published. I was into ‘serious’ comics then and didn’t get the humor. That’s not true, I got it but I wanted something different. This book has huge shoes to fill but I hope it succeeds because I really want a collection of the original series.
Thomm: Can’t say as I’m going to help Lee get his collection. Humor’s hit and miss in comics. I’ll take a look when it comes out, but I’m not making any promises.

Thomm: Man, there’s certainly a ton of stuff her. I suppose it’s no surprise to anyone that God is Disappointed in You is my favorite out if this.
Lee:  What a great month.  Without a doubt I knew you would order the God book!  Somethings are predictable like that.  For me... I don't know but I am leaning towards End of the Fing World from Fantagraphics.  The preview was too good and left me wanting more.