Books I Read Part One

The Thompson Twins had a song “King for A Day”.  Well, this week I get to be Jim for a day and am mocking mimicking his latest (ever changing) format for The Week In Review.  Actually, this post got to be too large (and I got too tired) so today, I’m filling-in for Jim filling-in for me (not really a break for me) and Tuesday you can read Part Two, where it’s just me filling-in for Jim.  Make sense? I figured I’d better give you all fair warning at the beginning or otherwise you might actually read this! 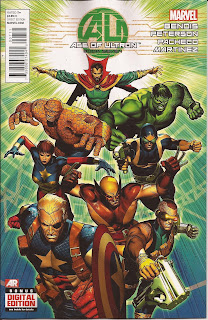 Age of Ultron: Book Seven by Brian Michael Bendis and Brandon Peterson and Carlos Pacheco was a little uneven.  The past sequences by Pacheco were interesting, but the present scenes by Peterson not so much.  While I prefer Carlos’ art over Brandon’s, it really was more of the story and the character designs in the “now” that I didn’t like.  Alternate Timelines are supposed to generate really amazing costume changes (like Mirror Mirror), but just look at the cover of marred heroes.  It doesn’t look that exciting to me (although my LCS owner did like it) and you can’t even recognize Janet as being Janet.  I wish Pacheco was doing the whole series – his and Busiek’s Avengers Forever is one of the all-time greatest epics! 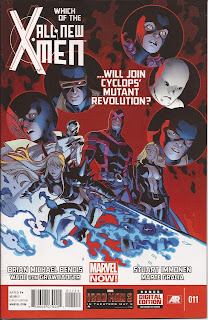 All-New X-Men # 011 by Brian Michael Bendis and Stuart Immonen was a great issue that was marred by a poor publishing schedule.   In issue #010 we were left with the cliff-hanger as to which of the original X-Men decided to join Cyclops’ and Magneto’s team.  We got the answer that it was Angel in the next issue of Uncanny X-Men.  I thought this was fine at the time, since the books have intertwined so seamlessly.  However, this issue takes place before the Uncanny one and even the cover, which is fantastic, is trying to tease you on the defector’s identity.  The first page layout is outstanding as we pan back in five panels from Jean to Hank to Bobby to Scott to Kitty with each character focused in the preceding panel now in the background.  All this is prelude to the big reveal one-page splash of Angel standing in front of Cyclops “X”.  Now, with the super accelerated publishing schedule of both these titles, why couldn’t they have waited on the last two issues of Uncanny?  They could have just published both issues next week.  Talk about a momentum killer.

The rest of the issue dealt with the discussion immediately before Angel and company depart.  Jean tries to take control of Warren’s mind again, only this time it doesn’t work.  She also gets a major mental beat-down by the evil-triplets.  There’s a sub-plot where Mystique pretends to be Pepper Potts and steals Tony Stark’s financial portfolio.  Kitty tells Jean that she needs to stop trying to control everything, threatening to end their association if Jean gets out of line again.  There’s some good dialogue in a couple of places about how they almost can’t really go back anyway, because they’ve already changed to much from what they’ve experienced in the future.  The ending was another great cliff-hanger and the team is going to face-off against Scott’s brother and his uncanny avenging cohorts.

hawkeye #010 by matt fraction and francesco francavilla was incomprehensible.  I get that the hit man who killed “Grills” was hitting on Kate, but it was more like a dream sequence than a story.  Really, really poor execution (pun intended). 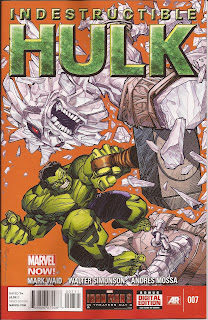 Indestructible Hulk #007 by Mark Waid and Walter Simonson was very enjoyable.  It helps that Walt is doing classic Thor again (the story is set in the past).  I liked the explanation of how Hulk managed to “wield” Thor’s hammer.  The art was great of course and Eliopoulos did a great job mimicking John Workman on the lettering.  The best part is that we’ve got one more chapter.  I’m still not really keen on this version of either the Hulk or Banner.  I think it has to do with the movie-fication of the Marvel Universe (a topic for another day).

Buy it if you’re a Simonson Thor fan.  Read it on the stands otherwise. 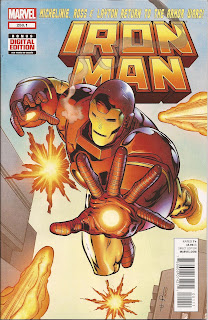 IRON MAN #258.1 by David Micheline, Dave Ross and Bob Layton was okay.  I was a little confused at the numbering.  In the preface they say that Armor Wars II began in #258. So, does this take place after that issue or does it take place instead of that issue?  Regardless I was happy to see Micheline and Layton (Ross is no slouch either) back on Iron Man.  I remember that era of the Jerry-curl Tony Stark and while it wasn’t as good as the issues covered in their recent Iron Man Omnibus, it still was a good run.  I don’t mind these untold stories if their well done.  I did like that David didn’t resort to the modern monologue narration.  If you’re going to “fill-in” some gaps, it should be seamless (same storytelling).  Same price would be even better, although I was excited that there was a digital code for this book!

Buy it if you still have the original run.  Read it on the stands, if you only have fond memories of that era.  Otherwise, skip it.  How’s that for a “wishy-washy” recommendation?

Come back Tuesday for Part Two and five more titles!