Okay I’m back. Of course I’m going on a trip at the end of the month, this time for a wedding. My wife and I only travel back to for wedding and funerals it seems. I’m planning on going to Baltimore Comic Con this year to break that trend.

First off I have to thank Matthew for filling in on Tuesday. He did a great job as always. Next I have to give you the clean and simple list for next week’s books here at Cosmic Comix and the detailed one at MidtownComics. For me the week breaks down with only 2 DCU comics, Sword of Sorcery and Wonder Woman. I’m getting the Authority collection since I sold my Absolute Editions. Outside of that I’m only getting Fables, so DC is barely on my radar next week. Marvel fares a little better with five books, Age of Ultron, Cable and X-Force, FF, Iron Man (following the new origin) and Nova.

My point of sharing every book I’m getting next week is to show that over 50% is coming from other publishers. The full list is Dream Merchant, Fatale, Legend of Luther Strode, Think Tank, BPRD, Conan, Dream Thief, Doomsday, GI Joe Special Missions, Bloodshot, Mark Waid’s Green Hornet, Comic Book Creator, Thunderbolt, Shadow and X-O Manowar. I believe that not only with my list, but in general we are seeing a shift in power. The big 2 will of course remain dominate, but the other publishers seem to have the more exciting projects. The big names are flocking to creator owned projects. It is an exciting time for comics as the digital market place, Kickstater and other things are changing the industry.

Onto the books, my plan is for the first post to be a long one. I’m covering most of what I read and tomorrow to have five shorter solo reviews of recent number one issues. 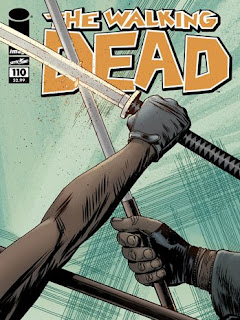 The Walking Dead #110 was a great issue. Jesus stops the one guy from blowing the planned attack of Negal and his group. Rick and company go to Ezekeil’s compound. Michonne does not take well to his acting as a king and he confesses his back story to her. Looks like Michonne may have found a friend and someone she could care about. This book always has it peaks and valleys. For my money the book is moving towards a peak. It is ten times better then the TV show and you really never know what is going to happen and who will live and die.

Battlefields #6 was a brilliant ending for Anna Kharkova. In fact Dynamite should pull all six issues of her story and publish it as a collected edition. In some ways Garth realistic portrayal of war stories faltered this issue. While Anna’s last story was touching and a fitting ending for a pilot and proud warrior it felt like it was not real. She steals a Mig and flews it towards to US. She does not turn in the plan and become a traitor she decides to fly straight up. It was a poetic ending, just not as reality as Garth brings to most of his stories. I think Garth feel in love with Anna as much as we all did. 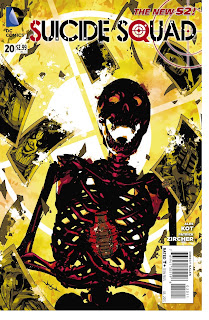 Suicide Squad #20 was a nice start for the new creative team. Now I want to see what else Ales Kot has written and I believe this is Patrick Zircher’s first DC work. It was not a hard re-set; it was more of the next phase of the Suicide Squad. In my mind it gave us some new stuff, but did not wipe away the past. DC has been quiet for about 4 weeks and this type of issue gives me hope that maybe things are settling down. Then I remember who is running the company and cross my fingers this book gets left alone and can just be what it is. It is odd that they have something called the Samsara serum which can bring you back to life and it is being used for villains by the government. The problem I have if this is in the DCU then death is meaningless. Batman will be pissed when he finds out. It is one of those plot points that sounds cool as you are writing it, but the overall implications are problematic. So I will ignore it and just enjoy the ride. Great kick off for the new team as they establish the cast and now we await the next mission.

Justice League #3 is crap. It has Geoff Johns, David Finch and Richard Friend and it is crap. The art feels rushed as Finch has never maintained a monthly book. The script is weak and the motivations of the characters are not compelling. After the Trinity War crap I will have to re-assess, it maybe time to drop the three Justice League books. Marvel is doing a better job with the Avengers books then DC is with the JL books. It has been a long time since Johns has been a reason to buy a book.

As happy circumstance would have it, next up is Avengers #11. It was a good issue as some of the kids run off to do a covert operation. Gambling, drinking, fighting and other shenanigans ensure. My favorite stuff is seeing Shang-Chi in action. I wish to Thor that Marvel could get some sort of deal cut and reprint the original Master of Kung Fu stuff as a high end edition and not some damn doorstop Omnibus. I’m enjoying this series but I have to say that all of the Avengers books that I’m reading are convoluted as hell. This book is still dealing with the builder stuff and has more moving parts then a Rube Goldberg device. 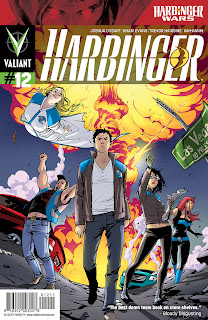 Harbinger #12 was another solid issue. I recently re-read the first arc from the 90’s version of the comic. I remember loving all of the early stuff under Jim Shooter, but the update is better. These are the same characters but the motivations and who they are is done better. Of course I believe that the planning behind the series was easier once you decide that you are going to update old concepts. It is easier to rebuild then build from scratch. I would love to hear what some of the original creators think about what is going on and of course I’m sure there are issues about who owns what. Anyway we are in the middle of the Harbinger wars and Peter comes to offer his help to the escaped Psiots kids of Rising Spirit. Only they are not concerned with escaping as they are just trying to enjoy life for the moment since there are bombs in their head that could be re-enabled at any time.

Batman #20 was just flat out fun. Capullo can draw the crap out of Batman and each issue is just beautiful. Scott does a nice job with Batman defeating Clayface. My one gripe is that Snyder has fallen in love with Batman having more gadgets then ever. On one hand, of course Batman would own every technological advantage possible. On the other hand I like to think ultimately Batman’s brains and physical skill can take down almost anyone. It is a tough line to straddle with the level of foes Batman is up against. All in all this is just a rock solid beautiful book. Another plus is  that this book will not be part of any of other “events” for a little while. 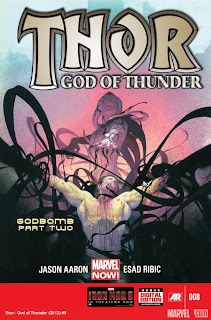 Thor #8 was a fun issue. Thor teams up with Thor and Thor. King Thor, Avenger Thor and Viking Thor all finally get together and are now united. It is funny, as I read somewhere it is like Marvel discovered time travel recently. We have it in the Fantastic Four, Age of Ultron and Thor. Of course if you press on time travel too hard the stories all fall apart as the logic of time travel never works. Still Jason Aaron is not letting logic come into play as he crafts a story of the 3 Thors battling to save all the gods of the Universe. Ribic’s art is a great compliment giving the book the gravitas when needed and the humor when needed.

Uncanny Avengers #8 also has time travel and is at least as convoluted as Hickman’s Avengers. Heck Rick Remender is dragging in plot lines from Uncanny X-Force. I did not even remember Angel having twin children. I also never knew Sunfire served as a horseman for Apocalypse. See what happens if you don’t read every Marvel comic ever published or fail to take notes. I hated the ending. We are supposed to believe a group of Avengers was killed on the last page. The whole anyone is dying at Marvel or DC has no impact anymore. Also I’m not a big Daniel Acuna fan. His art is okay, but it leaves me a little cold. Now after all of that, you may think I hate the book, I don’t. It is enjoyable to read and you have to try and make sure you following all the moving parts. I’m curious as to how it will come together. Of course with Remender I worry a little. He often slow plays the finish out so far that by the time we get there I no longer care. When I’m reading Remender and Hickman I feel like a kid again as I’m yelling “Are we there yet”. 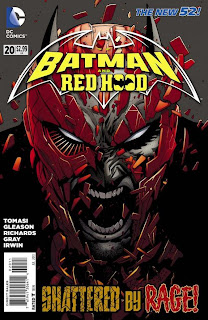 Batman and The Red Hood #20 was a good book. Peter Tomasi writes some great stories and sadly is often the third best Batman book of the month. With Grant wrapping up his Batman run Peter will be the second best Batman writer and often is doing stories as good as Snyder. Right now Peter is giving us Batman dealing with his grief, This issue he is with Jason. Of course Batman only needs to get the the Samsara serum and he could fix all of this.

Archer and Armstrong #0 was a nice origin story that gave me as many questions as it answered. It is interesting as sometimes I vaguely remember the old Valiant stuff as I’m reading the new stuff and it creates a level of confusion in my mind. This is not Valiant’s strongest book, but this issue was entertaining.

Wolverine #3 is typical Paul Cornell as you read it you are wondering about what the hell is going on. Alan Davis and Mark Farmer’s art looks great as always. This book could get interesting down the road, but right now the art is carrying the book.

Okay nothing else until Tuesday and they will be solo spotlight reviews of some recent #1s.