If you’ve been missing my spotlight reviews of Superior Spider-Man for the last few issues (I can’t really say months), then “Congratulations! Today is your day.  You’re off to Great Places!  You’re off and away!”  That quote from the incredible Dr. Seuss book, Oh the Places You’ll Go, is also appropriate for any recent grads (it is that time of year).  Come to think of it, I graduated from Virginia Tech with my BS in Civil Engineering 20 years ago THIS month!!!  Wow.  Time really flies… 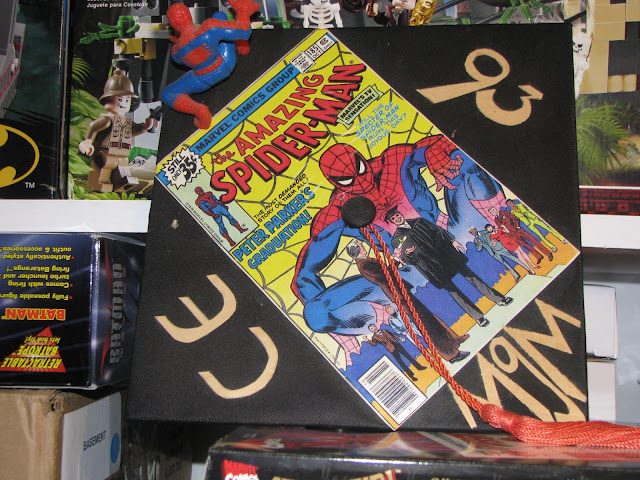 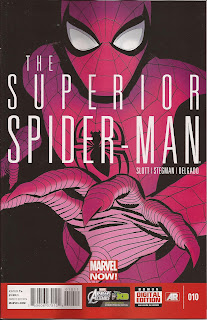 Potto® Parker is NO MORE!  He’s now just Otto in Pete’s clothing.  And he’s on the fast track to getting his Doctorate.  He’s also proving with every issue that this is the most entertaining and unpredictable Spider-Man saga in many, many years…maybe since I last wore the gap and gown.

It’s “Independence Day” for Otto as he wakes up for the first time without the pesky ghost-Peter rattling around in his sub-conscious.  He’s got things to do like stop a Gang War between the Owl and the White Dragon (haven’t seen him since Peter graduated from college [ASM #185]).   Peter would rush right into a confrontation against insurmountable odds.  Otto is less reactive and simply slurps his coffee while waiting for his enemies to “thin out their ranks”.

When he does get around to stopping the turf dispute, he makes quick work of the two gangs and their leaders.  He crushes the trachea of the White Dragon (before he can spew flame like the AIM/Melter/Mandarin character in Iron Man 3.  He also gives a severe beat down to Leland Owlsley (not to be confused with the lovable Owly).  You may not remember their epic conflict as depicted in the pages of Peter Parker: The Spectacular Spider-Man written and drawn by the underestimated Al Milgrom. (That’s two obscure references, which make me want to reread my back issues – always a plus in a modern comic series.)  Otto allows a few members of each gang in this encounter and in a subsequent one (with Tombstone’s posse) to escape, because they’re beneath his notice.  He means figuratively, but the hoodlums actually do go underground to be recruited by another master.

After his morning workout, Otto actually manages to make it to class on time (something Parker could never do), blowing off the suspicious MJ in the process.  He’s not there long as he speeds through an exam, making dessert plans with his “little” friend on the way out.  Speaking of MJ, we get one of the most realistic artistic portrayals of her character in nearly 50 years!  She’s wearing a pony tail and comfy clothes while at work in her nightclub.  Has she EVER worn a pony tail?!  Gotta say the fashionista looked great as a “real” woman (still impossibly thin).  The rest of Peter’s supporting cast is highlighted as well during a dinner at Aunt May’s where Jay and Jonah bicker over the Superior Spider-Man’s recent more violent actions.  Otto’s dessert with Anna ends in a kiss with the hint at more to come.  (I really like Anna and look forward to their evolving relationship, but I don’t want it to go THAT far without wedding bells!)  Unfortunately, Otto is called away for an emergency.  He gives a reasonable explanation that Spidey needs him for new tech gadgetry.
Is he rushing off to save Mary Jane from a raging fire at her club, which was set off by the newly disguised Vulture-kids and an orange spheroid?  Nope.  He’s off to round up another gang.  Poor MJ, she’s so certain that Peter will come to her rescue – she really needs to consider putting her trust in a higher power (and I don’t mean Thor).  Did Spidey’s Spider-bots fail to alert him, since they were recently hacked?  Apparently not.  He simply chose to have them call 911 instead of bothering with getting that smoke smell in his suit.

And just who was that mastermind assembling all the remnants of the various gangs?  It’s the Green Goblin, baby!  He may be calling himself the Goblin King, but he sure seems to be acting like his normal non-Norman maniacal-self.  One last thing, Carlie and Captain Watanabe are looking into Spider-Man’s killing of Massacre.  In case you thought he got off a little too easy in that issue.

GRADE A: Where the “A” stands for AWESOME!!!  This story has legs – at least eight of them, and I can’t wait to see where it goes next!  Sometimes we (more often Jim) bemoan the super-hero formula and the stagnate cape-set, but this series illustrates that the genre can still be fresh and exciting.  Slott and Stegman are a dynamite team.
Posted by Matthew at Saturday, May 25, 2013