Welcome back to Part Two of my fill-in of Jim’s “What I Read”/Week In Review.  As you know by now Jim was away for a family funeral and we remember him and his family in our thoughts and prayers.  Part One was in place of my normal Saturday post.  So, if you’re a Jim-only reader just step back a few days and see five more titles. 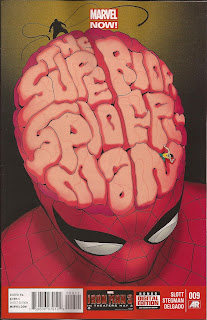 Superior Spider-Man #009 by Dan Slott and Ryan Stegman was a Grade A book.  I had planned to do a solo spotlight review, but this “fill-in” post for Jim got to be rather large, so I thought I’d “cheat” and split it into two parts.  Potto® manages to (for now) eliminate Peter Parker’s brain patterns (or “ghost”).  The story mainly consisted of mental battles consisting of Peter’s greatest friends and foes (well, only the Ditko-era ones with the exception of the Kingpin) and a great (literal) face-off.  It was pretty sad to see Peter forget people (join the club dude, but I think my mental frailties come from sleep deprivation) and I really liked that Slott thru in the classic “mistake” of Peter Palmer from an early issue.   I can’t wait to see what Potto® does without the controlling influence of Peter and it’ll be even more interesting to see how Peter comes back from this setback.  This is the most entertaining Spider-Man storyline in DECADES!!!

Buy it and buy a copy of Avenging Spider-Man for Jim (He needs it). 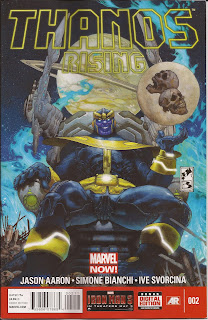 Thanos Rising #002 by Jason Aaron and Simone Bianchi was well done, which is surprising since the story is telling the origin of one of the Marvel Universe’s greatest mass murderers.  I thought this issue was an improvement over the first one.  The story is more compelling (like a train wreck) watching Thanos’ decent into scientific brutality.  I did appreciate that Aaron explained that Thanos’ appearance is due to Deviant (literally) gene.  If you don’t remember -- the monstrous Deviants are the opposites of the near-perfect Eternals.  Thanos is totally being played by the flirtatious girl-friend, who can somehow prevent him from taking what he wants from her.  She obviously is more than who she appears (like Satan in the Serpent) or in the MU maybe Death herself.  The art is exceptional too.

Buy it or Wait for the trade.  Your choice, but it actually reads well as a monthly. 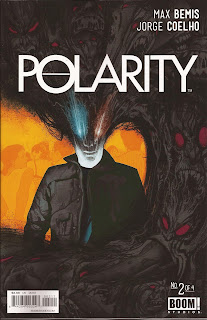 Polarity #2 by Max Bemis and Jorge Coelho has some really great dialogue.  I picked up this series after Jim’s and my LCS’ rave reviews and it really took a weird turn this issue.  There’s no way Tim is just hallucinating.  He actually has drug-induced super-powers (a regular Modern-day Hourman – just kidding)!  I really like Jorge’s art – it fits the vibe of the book perfectly.  But my favorite part is the brutal truth-telling that Tim does reading peoples’ minds – social commentary at its best.

Buy two and give one to a friend – you know… the one who is a little off.  I’d say give two away, but I don’t have the disposable income Big “Sugar” Grand-Daddy Jim has! :D 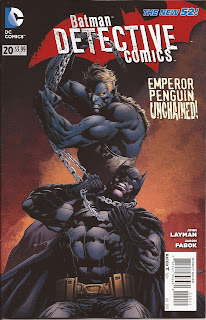 Detective Comics #20 by John Layman and Jason Fabok was both excellent and disappointing at the same time.  I really liked the Ogilvy character as an opportunistic backstabber and loved the way he usurped the Penguin’s throne, disrupting the status quo.  But I was shocked to find that he willingly turned himself into a creature of the night.  I looked at the cover and thought, “He doesn’t even look like a penguin?”  Well, that’s okay, because he’s not the E.P. anymore.  This is the best Batman book on the stands IMHO, but really Batman is more of a guest star than the central focus.  I believe Fabok, who is phenomenal, did all (or all put one) of the story arcs (it helps having a back-up to keep the monthly page count down).  I had thought I would eventually sell this series, especially since I’ve become so disenfranchised with the New 52, but you can almost (if you squint) pretend that this is happening in any universe, not just the “You’re Dead to Me” non-legacy version.  The ending of the second story was a great save for what I initially thought was the demise of the best new Batman villain in many years. 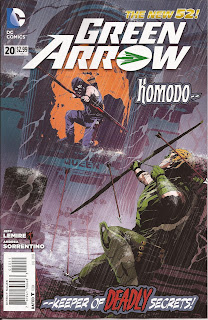 Green Arrow #20 by Jeff Lemire and Andrea Sorrentino is the book that I get because of the hype, but really don’t like it as much as everyone else.  It reminds me of those cutting edge 70’s stories (the 17-pagers) that were really dense and had the art no one had really seen much before.  The art is fantastic and the story is intriguing. However, I’m still not hooked yet.  But I’d rather get the first prints now just in case it really takes off.

Buy it, so you can be part of the crowd.

Come back next week to see what new format Jim is using this time! Being Jim is exhausting.  You’ve got to appreciate the sheer volume of material he puts out week-after-week.
Posted by Matthew at Tuesday, May 07, 2013