Lee: We’re starting the month strong with Image. Lots of trades this month which is different.

Thomm: Image has taken over the space left by less Vertigo offerings in my purchases, with a little space left over for Dark Horse. 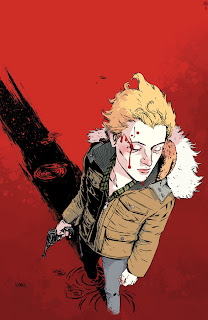 SHELTERED #1
story Ed Brisson
art / cover Johnnie Christmas
32 Pages / FC / $2.99
A Pre-Apocalyptic Tale Of Survival At Any Cost. The men and women of Safe Haven have been preparing for any-and-all end of world scenarios for years. However, their bunkers, weapons and training can't save them from the one threat they never could have expected: Their own children.
Lee: I can’t tell if this is tongue in cheek “they were corrupted by the internet” type kid threat or “they’re all tiny zombies” kid threat. Based on the bloody cover I’m going with zombies. I love a good horror story but I’m not sure I want to read one about parents shooting their own kids. I understand the sentiment but not sure I want to read about it.
Thomm: That’s because you don’t have any teenagers yet. Having spent an entire day with my son, following him from class to class in middle school, I certainly am more than willing to shoot other people’s kids. 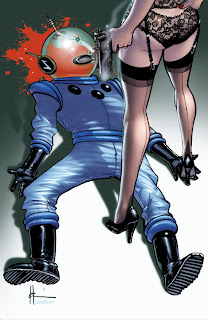 SATELLITE SAM #1
story Matt Fraction
art / cover Howard Chaykin
32 Pages / BW / $3.50
Sex • Death • Live TV! New York City, 1951: The star of beloved daily television serial "Satellite Sam" turns up dead in a flophouse filled with dirty secrets. The police think it was death by natural causes but his son knows there was something more… if only he could sober up long enough to do something about it. This noir mystery shot through with sex and violence exposes the seedy underbelly of the golden age of television.
Lee: This should be an easy gimme because Fraction has been on a roll lately. If only I was more confident in Chaykin’s art. Then again, it’s BW so I think he will be forced to draw more and not use fancy photoshop tricks to make it look good. Then again again, it’s pricey for a BW book. All things considered I’m gonna wait for a review.
Thomm: I may give it a whirl. One issue, anyway. I’ll have to take a look at the interior work and then make a decision. It’s got potential. 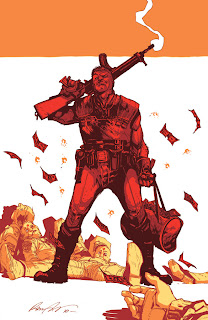 39 MINUTES, VOL. 1 HC
story William Harms
art Jerry Lando and Linda Sejic
cover Rafael Albuquerque
128 Pages / FC / $19.99
Robbing A Bank Is Easy, It’s The Getaway That’s Hard! The bank is surrounded by police officers, alarms are blaring, customers and employees are screaming, and the streets are blocked off. So what’s the solution? Kill everyone in town!
Lee: This sounds great but I’m not sure if it is. This was part of Images Pilot Season 5 week event back in 2010. Apparently Harms and Lando decided to finish the story and now we have it. The problem is that the plot/concept was good enough to get into Pilot Season but not good enough to win. Well, I assume it didn’t win because we never saw another issue. I just don’t know what to make of this.
Thomm: It’s a wait and see for me. I don’t have enough familiarity with the creators and the concept seems like something from a BS session rather than something thought out to a logical conclusion. 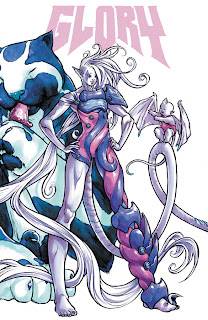 GLORY, VOL. 2: WAR TORN TP
story Joe Keatinge
art Ross Campbell, Ulises Farinas, Owen Gieni, Emi Lenox, Greg Hinkle, Jed Dougherty, Sloane Leong and Roman Muradov
144 Pages / FC / $14.99
Glory Reaches Its Shocking Conclusion! Featuring the introduction of Glory’s ultra-violence prone sister, Nanaja, the truth behind their parents' hidden alliance and a very special guest appearance by Ernest Hemingway! Collects GLORY #29-34.
Lee: Now this is more like it! Sign me up because I can’t wait to read this. The first volume was the best WW story that wasn’t WW since Alan Moore wrote Supreme (who wasn’t Superman). Go get the first trade, then order this and be ready to enjoy a great story.
Thomm: The entire story encapsulated in 2 trades? That’s a mighty good selling point, too. Much as I like the current WW this holds potential for some real derivative fun. 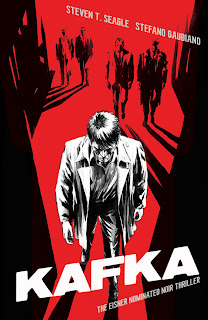 KAFKA HC
story Steven T. Seagle
art / cover Stefano Gaudiano & Marco Cinello
176 Pages / FC / $29.99
A Man With No Past Has Six Days To Recover His Future. Dan Hutton lost everything. Adrift in the witness relocation program, Dan is told his new identity has been compromised – by two different groups each claiming to be US agents. Not knowing who to trust, Dan runs - back to the world that took everything he loved.
Lee: This is another interesting book because it was originally published by Renegade Press (home of Cerebus) back in 1987. This isn’t new. Not even close to new which begs the question why reprint it? The write up is terrible but I’m betting this is some of Seagle’s earliest work and he went on to have a very good career in comics. I’m betting on Seagle and I think this will be good.
Thomm: Seagle’s definitely the reason to get this, though it may be a completist sort of thing. If you haven’t read any Seagle, this might not be the place to start, unless you want to do it in chronological order. 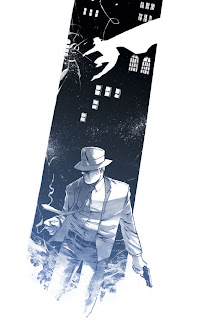 MASKS AND MOBSTERS, VOL. 1 HC
story Joshua Williamson
art Mike Henderson, Ryan Cody, Jason Copland & Justin Greenwood
cover Mike Henderson
128 Pages / BW / $19.99
One of USA Today’s Best Digital Comics of 2012. When Mob enforcer Bobby Silver killed masked hero Doctor Daylight in cold blood, it sent shock waves through the Masked community. Now in the eyes of the heroes, the mob is their #1 enemy—and it’s war! Buy it digitally here for .99.
Lee: Another mystery book because the best digital praise has my interest piqued, but the hype leaves me cold. The art that I found looked good and Henderson seems to be the main artist but who then are all the other people? I am interested enough to consider it but it will likely come down to how much extra money I have after I make my pull list.
Thomm: I like the concept. It’s a bit of “reality” to explore how archetypal heroes react to something that happens in our world all the time but never does in the usual superhero world of DC or Marvel, where death never lasts more than a few decades (a record set by Barry Allen, I believe).

Lee: Definitely an interesting month with lots of trades. Glory is a must have but after that there’s a whole lot of stuff that I can’t make heads or tails of.
Thomm: A nicely eclectic selection this month. Glory’s top in my interest among the trades and Satellite Sam in the singles.