I am sure everyone remembers Bruce Timms animated Batman series from the 90's.  It was a huge hit, and still very watchable to this day.  Heck I have the DVDs.  But, do you remember the comic book series that went with it?  It was an all ages, done in one, series that was... well... great!  The issues can be found in the back issue bins and I highly recommend it.  Here is a selection of some of the best covers. 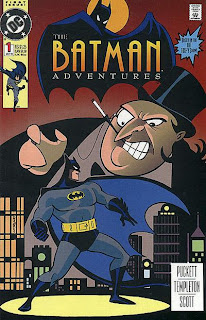 Batman Adventures #1, October 1992
Pencils: Ty Templeton
Inks: Ty Templeton
This is the issue that started it all.  And I can't think of a better cover.  It showcases both our hero, and a well known villain. Batman Adventures #12, September 1993
Pencils: Mike Parobeck
Inks: Rick Burchett
As much as I like Ty Templeton, I LOVE Mike Parobeck.  He was such a phenomenal artist.  But, what I loved about this series is that it tried to appeal to both boys and girls.  I am sure my girls would love this issue! 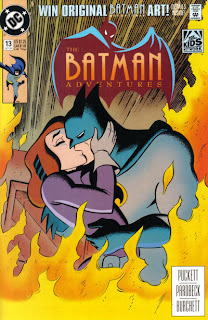 Inks: Rick Burchett
Speaking of appealing to everyone.  Hubba hubba Batman is getting some loving in the burning building.  Oh la la. 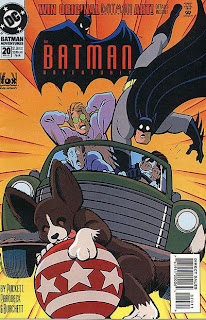 Batman Adventures #20, May 1994
Pencils: Mike Parobeck
Inks: Rick Burchett
Of course no all ages series would be complete without a cute puppy cover.  The editors of Batman Adventures really thought of everything. 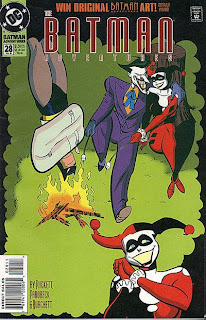 Batman Adventures #28, January1995
Pencils: Mike Parobeck
Inks: Rick Burchett
And you can't talk about Batman adventures with talking about the biggest thing to ever come from it... Harley Quinn.  Believe it or not, this is her only cover appearance in the original series.


That's it for this week.  Now go enjoy your Sunday.