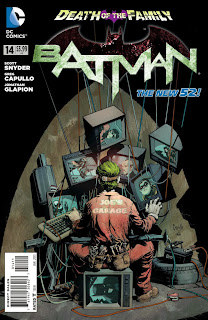 In a week that I would rate as a B+ in general and one that had a lot of very good and great books Batman #14 still stood out as the best of a very good week. Scott Snyder, Greg Capullo and Jonathan Glapion continue to hit it out of the park with this book.

Batman is the foundation of the Batman line up of books and the Batman line up of books is what is carrying the DCU at this time. You can look at it in many different ways, but Batman has to be considered the flagship title for DC. Normally it is a group book, but while Batman does not cross over into every other book when you think of the book out of the DCU Batman is that book. Hell Batman Inc. is a terrific book as is Batman and Robin, I can’t think of a time when Batman had so much going for all the books at the same time.

Capullo and Glapion have produced great art book after book after book. No matter what Scott has asked them to portray they have done it with style and panache. I knew Greg’s work from Spawn but never followed the book; here I believe he has stepped it up another notch. His work with shadows, camera angles, dramatic full panel shots and all the action is fantastic. Scott is already a master of knowing when to let the art carrying the story and when he needs to add dialogue to move the plot forward. It is a seamless marriage of word and pictures.


The battle between the Joker and Batman is being played on multiple levels as the Joker at times appears to be random, but in reality he is outsmarting Batman. The big reveal is the Joker claims to know all of Batman’s secrets. Now in the last Court of Owls Snyder hinted that Thomas Wayne was back (a heretofore unknown sibling) and was one of the big villains. Snyder pulled back and left it as a thin possibility but ultimately wiped away that it was Thomas Wayne. This time the Joker has stated he knows all their secrets but has yet to actually prove the point.

If the Joker does know all their identities can Snyder leave the Joker alive? I would argue that you can’t and I would assume that Bruce, Dick and Barbara would not kill him but Jason would as would Damian. Both of those characters do not see the sense in beholding to the rules that Batman lives by, especially when they are killing a great evil. I think they can have Jason do it and there is no reason that someone else down the road can’t pick up being the Joker, especially since his face now just a mask. Of course the other solution is that the Joker is in Arkham and no one believes him or you have Batman hold him prisoner in the Batcave. No matter the solution the journey is going to be fascinating and the justification for the solution should make for some great storytelling.

I’m still confused as to what the idea of cutting off the Joker’s face was for, but whether planned or not Scott has made good use of it. In fact Scott and Greg have upped the Joker’s menace quota so high that I wonder if someone is not going to get upset with them as they have so many young kid toys that have the cartoon version of the Joker. Imagine a young mother’s dismay if she has no clue that the Joker in the comic is a far cry from the toy Joker her child is playing with.

Batman is still my favorite character and my love for him has yet to be totally stamped out.Scott Snyder is one of the industry’s top writer and possibly the best in the business right now and Greg and Jonathan’s art is superior. Hard to beat a book that has everything.
Posted by Jim at Wednesday, November 21, 2012