Before I jump into the week in review here are the prerequisite links for the books for next week with a detail peek here and a straight forward easy to review list here. Thankfully by the time I get my books the election will be over. Living in a battleground state makes you afraid to turn on the TV. Back to comic books, the ones I’m looking forward to the most next week are Detective Comics, Sweet Tooth, Uncanny X-Force, Stumptown, Mars Attacks and Storm Dogs. For the record I canned Dial H as it was just too convoluted to follow as a monthly, it might be better as I trade, but I’m not betting on it.
I’m starting this week with some commentary on two books that have the commonality of being graced with work by Joe Kubert. 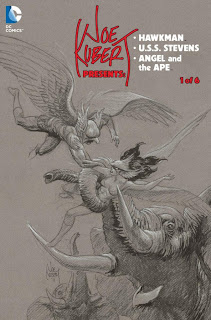 Joe Kubert Presents #1 has two stories by Joe Kubert, one is a Hawkman story and it is 22 pages of phenomenal art.  The version of Hawkman Joe uses is the Silver age Hawkman, but it is not a strict use of that version as Joe makes up new powers and an altered background for the character. It is a nice one and done story. Not the strongest story in the world as it is a little heavy handed about trying to make a point over how we are a society are hurting our own planet. It actually feels a little too preachy at times and just reads like a lecture more than a solid adventure. It doesn’t really matter because it reminded me of how great Hawkman can be as a character and how great Joe’s artwork is in depicting Hawkman. The rest of the book has Angel and Ape by Brian Buniak, USS Stevens by Sam Glanzman and Spit by Joe Kubert. All were great. Spit was the first part of a boy in a time of whaling ships and sets up the first part of a longer story. The book acknowledges that Joe died before it was published but we don’t get any background information on what is yet to come. Was the book completed? Will Andy or Adam have to fill in? I had tons of questions and no answers, but in some ways this was my favorite book of the week. 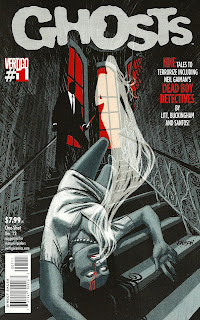 Next up is Ghosts from Vertigo. Vertigo has taken to publishing the occasional anthology book and I welcome the format. Dark Horse Presents is one I pass on because I’m not into chapters of continuing stories when I get an anthology. It seems that Dark Horse is interweaving DHP with series to garner some cross marketing effect. That is a valid approach, but one that I prefer to avoid. Ghost was uneven as many anthologies are, with story “A” being great; story “B” being so-so. What caught my eye was that Joe Kubert’s story was published in an unfinished format showing the work he had completed. Apparently he wrote and drew the eight pages in rough pencils, but never got the chance to ink and then color the work. DC published it as is, except they did the lettering so it could be read. Oddly enough it is a story of an old man who is on his way to die and he has one last battle to save his grandson. It was a great idea by DC and to their credit it is explained in the book why they did what they did.

I called this a memorial to Joe Kubert because I want to explain how important this guy was to the industry and how much I always enjoyed his work. Since I have started to collect art work I realize how many artists I love who I wish I owned one of their pages and Joe is right up at the top.

When people talk about the influential people we hear Kirby, Ditko, Adams, Stan Lee, Alan Moore, Frank Miller and many other names thrown about. Joe’s name is not often in that mix. The reason is that Joe was an artist first and foremost and was not known for creating characters so much as he was for doing the definitive versions of many of the characters. Yet Joe’s influence and impact on this industry is far reaching and more important then I think we can normally see.

First off just trying to catalog all the artwork he did for all the various characters and the list would go on and on forever. For me I will remember Sgt. Rock, Hawkman, Enemy Ace, Tor and Tarzan first and foremost. I’m still looking forward to getting my copy of the Artist Edition of Tarzan by Joe Kubert. As an artist his work is incredible. His draftsmanship, his storytelling ability is all superior. In looking at his work I believe he may have been a strong influence on Neal Adams and who knows how many others.

Joe also served as DC’s director of publication form 1967 to 1976, not sure what that title means 100%, but the point is that Joe was also instrumental in not just drawing books but sometimes serving in managerial positions as well.  Add to that resume all the graphic novels he has done like Jew Gangster, Fax from Sarajevo and other stories and you can see he was an innovator as well as an artist and editor.

Perhaps his greatest legacy is the wealth of talent that was trained by the school that he founded. The Joe Kubert School. The alumni list is impressive with Rags Morales, Steve Lieber, Amanda Connor, Tom Mandrake, Tim Truman, Andy Kubert, Adam Kubert, Shane Davis and many, many others. Of course Adam and Andy, his sons now run the school and are highly sought after artist themselves.

I thought the best tribute to Joe was from Marvel and DC when both companies ran a page in memory of him.

From the outside looking in Joe was not only the consummate professional, but a talented and well respected man and from all appearances a family man as well. Joe was 86 when he died and my Dad will be 93 this month, so Joe is from that same era and we have less and less of that generation still with us.

I will miss seeing new work from Joe and hope one day his sons’ put together a great retrospective of his contributions to the industry. We lost a legend whose contributions may not always be as noted, but one whose legacy will live on for a very long time.
Posted by Jim at Monday, November 05, 2012