Well Part 1 was a freaking long post so these next segments are going to appear puny in comparison. For the most part I have lots of complaints about the big two, but they provide a lot of quality entertainment and this week I think these six books were either very good or excellent comics. 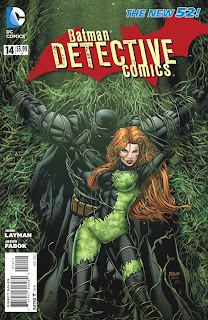 Detective Comics #14 by John Layman and Jason Fabok was excellent. I had dropped Detective but with John Layman now on his second issue this book has gone from a pass to one of my favorite DC titles. Batman now has a writer line up of Grant Morrison, Scott Snyder, Peter Tomasi and John Layman, hell even Dark Knight is coming along as a decent read. Layman continues to redefine the Penguin, building on what Snyder did by making his family one of Gotham’s elite. Layman is making him over into the negative of Bruce Wayne. It is interesting to see him be given a level of gravitas that turns him from a joke into a potent foe for Batman and Bruce Wayne. Then Layman moves the story forward with Poison Ivy trying to take out a polluting plant owned by the Penguin. While Batman does not disagree with Ivy’s goal, he cannot support her methods. So many shades of gray are built into the characters that it makes for a great read. The surprise that Clayface shows ups announcing Ivy is his wife is explained in the back up story, also by Layman. I’m very impressed with the range of Layman as he writes Chew, Mars Attacks and Detective and every book is well written, planned out and all three are very different in tone and content. Jason Fabok’s art is nice and it is great for a super hero book. I believe he worked with David Finch and it shows in a good way. All in all I almost hate DC for  bringing me back to a book that I had dropped.  Plus they announced Lemire is writing Green Arrow and Keith Giffen is teaming up with Levitz for LOSH, two more books I will be getting again. 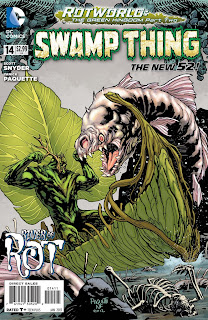 Swamp Thing #14 by Scott Snyder and Yanick Paquette was a very good issue. This book suffered from a year long build up, but now the story is in high gear and I really enjoy it. We are a year into the future and Arcane has won and the planet is almost 100% controlled by The Rot.  This issue we saw Swamp Thing play Godzilla against The Rot controlled Teen Titans and that was amusing. I will be curious to see how this plays out as over the course of the story. In the end if Swamp Thing and Animal Man win, they still have to re-set the world. If they re-set the world what are the repercussions? If there are none, then it would invalidate the story and Snyder and Lemire are too good to do that. The art on Swamp Thing can be annoying as Paquette plays with some weird layouts and the flow of the narrative is not always easy to follow. I appreciate what he is doing and why but it needs to have a better design to keep it readable. Overall Rotword is great and Lemire and Snyder are doing a great job with the story. 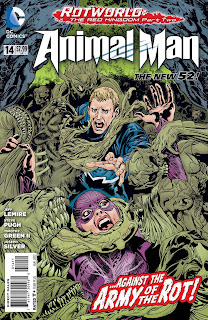 This leads us to Animal Man #14 by Jeff Lemire and Steve Pugh. Animal Man’s side of the story is The Red Kingdom while Swampy’s is The Green Kingdom. It is the same deal with this series as it was treading water for almost a year and now all the ground work is paying off in spades. Animal Man is teamed up with some of Earth’s last defenders and he goes off in search of Maxine, his daughter. This parallel’s Swamp Thing’s search for Abigal and both are being led into obvious trap of Anton Arcane, the master of The Rot. I like Buddy’s ragtag group of heroes consisting of Constantine, Black Orchid, Steel and Beast Boy. It is such an odd mix and yet Jeff already has them developing chemistry. Both series are coming together nicely and this is how a cross over should work, separate stories heading to the same goal. I have to give kudos to DC that they have definitely tried to keep up a healthy mix of the type of titles they produced. Of course I hate them for cancelling Hellblazer for no reason. Companies can run two different versions of characters and make it work, Marvel does Max versions, DC should maintain a Vertigo version of the character. Way off subject, back to Animal Man and Swamp Thing; these series have gone from decent slow building to great fast paced rides.

Marvel gets a representation this week, well I already mention two books from Marvel and with Marvel Now coming into high gear I will be reading a lot more. Oddly enough this book is from last week, but due to a glitch I got Winter Solider #12 by Ed Brubaker and Butch Guice this week. Bucky is desperate to save the Black Widow and so he submits himself to being turned back into the Winter Solider. Hawkeye and Wolverine are in pursuit and a good battle ensues. Captain America finds out the target of the new mission is Daredevil. It is a noir spy novel being done with super heroes. There are some issues here and there and of course good guys committing crimes under mind control is common in comics, but somehow it is all flowing and working out to be a nice story. Guice’s artwork is an asset and Ed’s swan song is high note for this series and shows off why Ed has been so popular.

DC has two more books on this list with World’s Finest #6 by Paul Levitz, Kevin Maguire and George Perez and we have Green Lantern #14 by Geoff Johns and Doug Mahnke. World’s Finest is blessed with two great artists and this issue having Batman’s two children face off (Huntress and Robin) was very cool. Earth 2 vs Earth DCNu (what, what do we call it, as Earth One is the graphic novel world) was enjoyable and should be interesting next issue when they team up. Green Lantern is amazingly good. I swear just getting Hal away from being the main character helps. We have the Guardians going off the deep end and the confrontation between the new GL and the JL was well done. The one headache I have is the First Lantern. He is not being shown and he is a mysterious part of the entire Guardian history. The problem in the new DCU is that even a died in the wool GL fan who is immersed in all the stuff that has been made up over the last 50 years could think he knows who it is and be dead wrong. Or he could be right, but the character will be totally different. The “surprise” and shock value of this type of slow reveal is lost because you can do anything you want since past history means nothing in the DCU anymore. Still even with knowing that the other set of little blue people will become the new Guardians down the road, the story is playing out very well and the book has fresh life being breath into it.  These are two very enjoyable series.

Part 3 promises to be even shorter then this part as this got longer then I wanted.
Posted by Jim at Monday, November 12, 2012