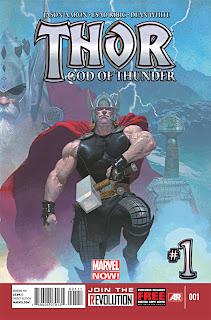 Wow, what a great start to a series by Jason Aaron and Esad Ribic, Thor God of Thunder #1 is a definite new addition to my list. Of all the Marvel Now books this is the best of the bunch so far and I will be hard pressed to imagine anything surpassing it.

This series is set up to be a series unto itself. I love that idea as I like being able to invest myself into a book and not worry about how it is going to be affected by an event in the greater universe that it exists in. Jason has been starting to hit on all cylinders in the Marvel Universe as his work on Wolverine and the X-Men has been fun (I only get the book on occasion) and this series was a beautiful setup to start a series.

We get Thor in three different ages. First is Thor from a millennium ago where he answers Viking prayers and comes to a village to take out a few Frost giants. Afterwards the drinking, eating and whoring all break out to the grand enjoyment of Thor. A body washes ashore and the villagers ask Thor to check it out. Thor recognizes the body of a god from a foreign pantheon who apparently was murdered. While Thor brushes it off he does note he has never seen horror in someone’s eyes before.


We then jump ahead to a current timeline. Thor responds to a prayer from another planet and comes down and brings them rain to save their harvest. Mead is broken out and Thor hangs to have a drink or three and talk to native people. He finds out their gods have been silent for a long time. Thor goes to explore and finds their heavenly palace. He discovers all have been killed and worse than just killed tortured and killed slowly. Thor is attacked and in a fierce battle for his life against the guard dog of whomever killed these gods.

We next cut to a far, far future. Thor now appears to be the last one left and he sits of the Throne of Asgard a virtual twin of his father.  Destruction is all around and Thor draws the Odinsword and jumps into battle against a group of the dogs that he faced in his far past.

The story has that epic feel of mythology that goes missing when Thor is based on Earth and has laid the groundwork for a story that spans the life of the immortal Thor. Ribic’s art matches the book and gives this book a feeling of a grand tale being told over a campfire. If I have an issue it is that the color palette was a little too dark for my taste. A slight lightening of the tone would have been better in my view.

I think Marvel has a hit with this book and Jason Aaron could be doing his best super hero work to date.
Posted by Jim at Wednesday, November 21, 2012