Lee sent me the first three trades of Rex Mundi, published by Image and then Dark Horse from 2003-2009.  I can see why he sent them to me, as the premise of the book is intriguing; however, there are some flaws that make it hard for me to like.

First, the background.  Rex Mundi is set in 1933 Paris.  There's no threat of rising Nazis in Germany because in this world the geopolitics is more akin to feudal times than our 20th Century.  Juliene Sauniere is a doctor.  The medical profession is governed by guilds, as are all other professions.  His former lover, Genevieve Tournon, is also a doctor.  She has been appointed the physician for the Duke of Lorraine.  These are the three main players in the story, at least to the halfway point I've read. 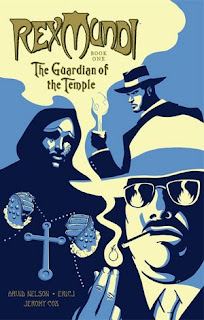 Despite the feudal structure to governance in this world technology has advanced at the same pace it had in our world.  It looks like our 1933 Paris.  This is a little odd because feudalism wasn't conducive to technology.  On top of that magic is an actual force in this world.  There's even a guild of sorcerers.  The existence of sorcery, it seems to me, would also retard the development of technology.  Why bother with technology when sorcery can get things done for you?

The most interesting part to me is the geopolitical, which looms large throughout.  France is largely the France we know but has fewer colonial holdings than the France of our world.  Spain doesn't exist.  It's still controlled by a Muslim emirate.  Germany is Prussia.  The Holy Roman Empire controls central Europe.  The Ottoman Empire is still going strong.  The United Kingdom, like France, is more or less like our United Kingdom of that time.  I like this core premise a lot.  The Duke of Lorraine is essentially a mix of Hitler, gnosticism, and the plot of The Da Vincie Code.  He stirs up race war against Muslims while secretly working to become king of France and then the rest of the world, claiming to be a direct descendent of Jesus and the rightful kings of France.

Dr Sauniere's involvement stems from an old friend and priest seeking his help recovering a scroll stolen from his church.  This leads to several murders, a sorcererous hit man, and the Catholic Church's Inquisition cracking down on the good doctor, then co-opting him into their own investigations.  Dr Tournon resumes her love affair with Dr Sauniere while also becoming the mistress of the Duke of Lorraine.  There's not enough development of the characters for me to tell how genuine her dalliances are supposed to be.  Of the three, only the Duke can be said to be a known quantity, but that's because he's mostly charicature.  The two doctors are shown having a lot of reaction and bouncing from one encounter to another but I never got a feel for who they were or why I should like or dislike them.  They also use the phrase "What the hell" inordinately for the context of their conversations and their levels of education.  I mean, I can swear with anyone, but it just seems forced the way it's done so often with these two, like they're yelling at each other when there was nothing leading up to it that would make a reader think they should be yelling. 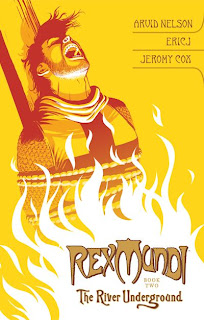 Now, my bigger problems with the world Arvid Nelson and Eric J created for the book are that the geopolitical of the Americas doesn't make sense.  There's no mention of our Latin America in these three volumes, so I have no idea what they plan to do to explain that.  In our world the newly independent Spanish and Portugese kingdoms set right out on exploration westward as soon as the last of the Moors were evicted from Iberia, leading to the heavy Spanish presence from Mexico southward and Portugese domination of what would become Brazil.  With the Moors still controlling Iberia in the Rex Mundi world I don't know if Islam is the dominant faith of South America or the natives managed to retain control.

The problematic part is North America, specifically what's the United States in our world.  In this world there are the Confederate States of America and the Federated Republic of America, as well as the independent city state of New York and a disputed zone in the Nebraska Territory.  How does this occur?  With no Spain to begin the European westward expansion, do France, the Netherlands, or the UK make any move in that direction?  Does the UK develop it's famous naval domination if there's no Spanish Armada to defeat in 1588?  Does slavery ever get introduced into North America?  How does the CSA break from the US successfully?

Some of these issues are addressed in the supratextual portion of the book.  A la The Watchmen, Nelson provides extra information outside the comic part of the story.  Most of this is in the form of newspaper articles from a daily that's contemporaneous to the story told.  Sometimes there are special reports, too.  The problem I have with this is that there's a lot of missing information if you don't read it.  When I read the book the first time I read all of it, including those articles.  The second time I read it I skipped them.  Whereas The Watchmen's extra items provided detail but weren't necessary for the story, I felt like there were important things in Rex Mundi's press extras that were necessary for me to understand what was going on, especially with the geopolitical aspects of the story.

But back to the history of the Rex Mundi world.  The Protestant Reformation was a failure in this world, apparently the turning point that differentiates it from our world.  That adds even more questions.  How did the church suppress Henry VIII's break?  And why does the Duke reference The Thirty Years War?  By the time that war was founght England and all of the Nordic countries were Protestant.  Even if the Catholic countries won The Thirty Years War in this reality, how would they have taken England, Scotland, Denmark, Sweden, Norway and Finland?  They might have eked out a win in Central Europe, but all the rest?  With what army and resources?

Then there's the fact that the French Revolution still occurred, but Napoleon died as an unknown and never became Emperor, leading to the restoration of the crown.  If the Protestant Reformation failed, where are the religious expatriots to North America originating?  How do they develop their own rebellion against the UK?  If there's no American Revolution, lead by Protestants, what's the impetus for the destitute of Paris to rebel against the French crown?

This is one of those instances where I know too much history and the creators are trying to take too big a bite for the willing suspension of disbelief to work for me.  If you don't have a problem suspending disbelief this much, this might work for you, but there are two more story aspects that trouble me that having nothing to do with the ficitional world created. 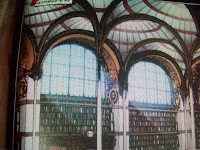 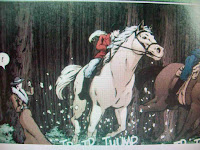 First, Eric J's art is distracting.  He's gone midway through the third volume, The Lost Kings, but he's the entirety of the art in The Guardian of the Temple and The River Underground, as well as the first half of The Lost Kings.  Perspective is problematic for him.  He has beautiful work with buildings and parks and so forth, but his people and animals are more difficult for him.  I could chalk up the stilt like legs on his people to artistic license, and maybe even the somewhat bobble headed appearance of women as well, but he's death to my flow of the story when he tries to show contextual relationships of people at different places in a space.  It's especially disconcerting when that occurs because it can be so beautiful at other times. 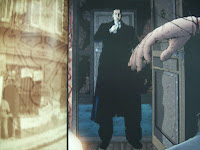 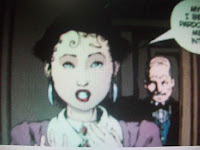 Second, magic appears to be limited to the sorcerers's guild, though that's only known if you read the supratextual material.  Then, suddenly, in the third volume both Dr Tournon and the Duke are using magic, albeit at low levels.  More strangely, Dr Sauniere suddenly has magical ability he doesn't even know he has.  Major WTF moment.

Rex Mundi is a mixed bag for me.  I like the gnosticism aspects of the story a lot.  That sort of revisionist history, based on the actual gnostics of the first centuries of Christianity, is fascinating to me, and Nelson and Eric J do a good job of incorporating it in the story.  Equally, they work the politics of the world very well, even if I don't accept how they got to that point in history and technology.  Right up through the point where Dr Tournon and the Duke are using magic I'd say it's a worthwhile read, but I'm more on the fence with those new turns.

Finally, I have to comment on the Dark Horse production values.  Two of the three trades have pitiful binding.  One of those two has such bad binding that pages are coming out in pairs.  The other at least has fled its binding in one unit, but trying to keep the pairs of pages in the book in a neat fashion is nearly impossible.  And, truth be told, the binding on the tird isn't much better.
Posted by Thomm at Thursday, November 29, 2012