Five books jumped out at me this week for different reasons. Each book was surprising for different reasons, but it just shows how writers and artists can try to do some different things to make a book different. Oddly enough four are Marvel and one is from IDW. As I type this I still have a bunch to read, but DC was a little blah this week to me, more on everything else in Part 3.

First up is Frankenstein, Alive, Alive #2 by Steve Niles and Bernie Wrightson. Only 16 pages of new story and art and then the actual Frankenstein novel is being serialized in the back. As I have recently read the original work in an edition with all of Bernie Wrightson’s work the backup material is not for me. Now for a $4 book you may think I’m being ripped off to only get 16 pages but you are wrong. Bernie’s work is so stunning and so amazing it is possibly the best pure artwork ever produced for a comic book. I own a page of artwork by Berni from a Marvel story and still regret that I did not buy a Doc McCabre page one year at Balto-Con. Bernie Wrightson has always loved Frankenstein and the artwork in this book shows that love. The level of detail and the depth and breadth of his work is nothing short of astonishing. I have added five photos along with the cover to give you an idea of how fantastic his work is on this book. Even with great draftsman like Dave Stevens, Neal Adams, Joe Kubert, Wally Wood and an incredible list of phenomenal talent in this industry this stands out as work that will be hard pressed for anyone to ever match. If I had $5,000 to spend I would love to own one of these pages (time to but a Powerball ticket). In addition to all of that the actual story itself is good. Niles set up Frankenstein’s death and now that he has learned he may not be able to die we are getting the sequel to the original book done with respect and admiration and staying true to the source material. It may take Bernie a long time to complete these pages, but after looking at the art I wonder how he did it so fast. 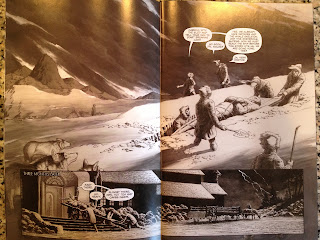 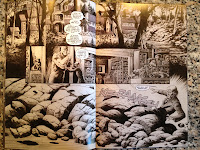 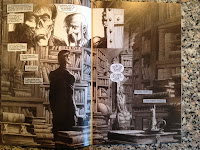 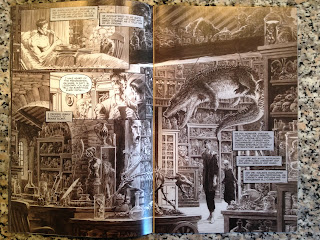 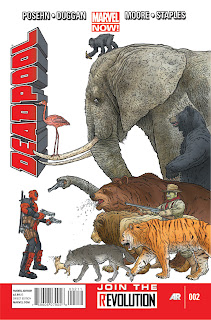 For something totally different and insane, we check in on Deadpool #2 by writers Brian Posehn and Gerry Duggan with art by Tony Moore. As I said before I had skipped Deadpool so some of the frat boy humor is amusing to me and the art by Tony Moore pulls it off. It reminds me of the old Mad magazine movie parodies in the approach. The story is almost an afterthought and yet it is continuing to carry a narrative. Some of the jokes are heavy handed and some are just not funny, but it is a light hearted romp making fun of superheroes and everything else. In a world of comics that are almost self important this book was a pleasant break. I’m not sure how long I can hang on this type of book, but Chew has shown that you can have fun and still tell stories that keep you coming back for more. One last note is I saw a video (click on link) showing the Marvel AR stuff. I may have to actually check out the AR stuff as they have added creator commentary and some fun stuff to make the AR appear to be worthwhile as opposed to worthless when it started. 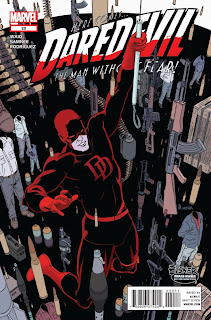 Daredevil #20 by Mark Waid and Chris Samnee was just damn odd. I have enjoyed Waid’s work and he seems to be hitting a creative high point in his work lately. From Thrillbent to Daredevil and now Indestructible Hulk; Waid’s work has been firing on all cylinders. Of course I still think Waid would be the perfect EIC of DC, but I digress. This issue Daredevil is just a head as the villain of the piece delivers the typical super villain speech that allows the hero time to get out of the trap. I’m not 100% sold on the how and why of removing people’s heads without killing them, but the scenes it provides for the book are funny. DD is at times just a head on the floor and at one point Coyote (the villain) is feeding other captive heads bits of meat or something. Every arc of a series can’t be a slam dunk winner and this story line is faltering for me as of this chapter. It is still better then the vast majority of the books on the stands and Mark’s writing is smart and inventive. Chris Samnee’s art is as always great and I believe deserves even more recognition then he has garnered. 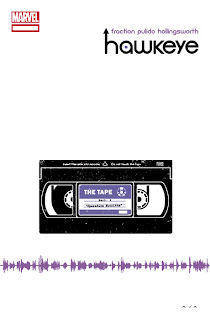 Next up is Hawkeye #4 by Matt Fraction and Javier Pulido. One of Marvel’s brightest new series but with this issue I feel a trend is developing that I do not like. Clint Barton is ostensibly the star of the book, although Kate Bishop is also Hawkeye. The problem is how incompetent they are making Clint look. Also the artist portrays him as a puny guy next to Captain America. Now I don’t expect Clint to be perfect and I’m not saying he has to look like a roid rage wrestling star, but he is suppose to be the central character. As such he should be competent and heroic. I mean this guy hangs out with super power people and only shoots a bow and arrow. He should not be Snapper Carr to the JLA, he is a hero of merit. I may be jumping the gun, but Clint got his ass kicked seven ways to Sunday by people he should be able to take out in a heartbeat and it looks like Kate is going to save his ass yet again. On issue #4 we should not be hitting a formula. I still enjoy this series and look forward to each issue but worry it is falling into a rhythm and pattern way too fast. 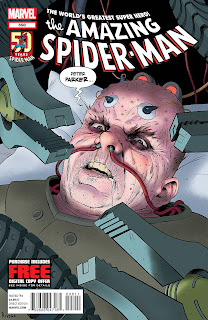 Last and not least for this part is Amazing Spider-Man #698 by Dan Slott and Richard Elson. I had heard that spoilers were all over the internet and I was not getting my books to Friday. I managed to avoid the spoilers and went in reading the book clean. The first thing I noticed was I have no clue about who the heck Richard Elson is and was shocked that an unknown was drawing the theoretical end of the Amazing Spider-Man. It has been announced that the new Superior Spider-Man will not be Peter Parker. Of course we know that at some future point Peter Parker will be back, but like the death of Superman you can’t help but look. It was a very bland “Day in the Life” book until the very end. At the end we learn Doctor Octopus has taken over Peter Parker’s body and has all of his memories so he can be Peter Parker, while Peter is trapped in the dying body of Doctor Octavius. WTF was my initial reaction. I have not been a tried and true fan of this book and only check in on occasion but this blew me away. I have so many questions. When did Doc Ock get this type of powers? How long has the switch been on? And how the heck does this all work out? After some reflection I now have some other thoughts. It goes to what is our identity. Phillip Dick played with this idea and they were expounded on in Total Recall and Blade Runner. What makes us who we are? The idea that Doc Ock inhabits Peter’s body but has all his memories begs the question that is he not in fact Peter Parker in some way? If nothing else Slott has me hooked on this story.