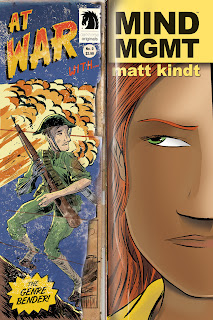 Mind Mgmt is a fantastic series by Matt Kindt and the zero issue was actually a published version of three short digital only stories In many ways these are just more back story on the character Meru with more of  the history of the company and Harry Lyme being mixed in. It is perhaps the most straight forward issue of the book to date. Matt packs in plenty of material into these three short stories that add more richness to the overall series itself.

One thing that is interesting is the advent of more and more material that is going straight to digital and then may be published later. We are seeing the true advent of the digital age impacting comics like never before. Even two years ago going direct to digital was basically unheard of especially for bigger publishers.
There is a ton of material that is out there from smaller publishers that is digital only, we have Mark Waid now pushing digital only, Marvel and DC targeting books for digital only and then publishing it later or adding it to a collected edition.

The market place has broadened and I believe a lot of digital customers may never care to own the published version. I’m fine with just a digital version of many books that I read and would no longer care if I own a paper copy.

How this play out and the overall impact to the industry will be fascinating to watch. I think it will improve the market and hopefully bring in some new customers to the comic stores, because it is easier to look at stuff in a book store or comic store that check out books online.

That was a heck of a long tangent, but back to Mind Mgmt. Matt has built and is continuing to build up a very deep and rich back story about the company. Harry Lyme, one of the strongest agents quit and Mind Mgmt has essentially been broken, but all the operatives are still out there and impacting the world or are in hiding. Meru the intrepid reporter is being lead astray time and time again but you know she is going to break of the circle Lyme has put her in and looks to expose Mind Mgmt.

If you have passed on this series, jump on with the next issue and pick up the collected edition and catch up. Matt as writer/artist is telling his best story to date.
Posted by Jim at Monday, November 19, 2012