Lee: It's the special Friday after Thanksgiving edition of Image previews.  Wheee what fun.  This month there's alot to talk about but only one matters.
Thomm: Oh, big milestone for Image this month. I think I’m looking forward to this even more than I was The Walking Dead. Could be because I read so few superhero books now. 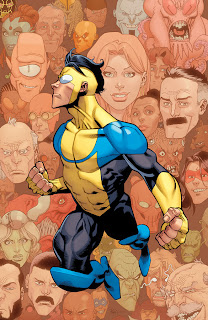 INVINCIBLE #100
INVINCIBLE #100 CHROMIUM EDITION
story Robert Kirkman
art Ryan Ottley - John Rauch
48 Pages / FC / T+ $3.99
10th Anniversary Landmark 100 th Issue Spectacular! It’s all been building to this. Mark Grayson’s entire life as a superhero, all he’s learned, all he’s endured, it’s all been leading to this one moment. Will he become the hero he was meant to or will he choose... a Different path? The aftermath of this Extra-Sized issue will shock you.
Lee: Can you believe Invincible made 100 issues? It’s incredible. And it’s been good for the entire time. And in honor of the celebration we have a chromium cover. Sigh… good ideas gone bad.
Thomm: Well, at least it’s not the 40 different covers that were done for The Walking Dead. Of course, I’ll just be getting the standard cover. I’ve never figured out the logic on the multiple covers. It’s not like the story inside is any different. Ah, well. This should be a great issue.

More below the break! 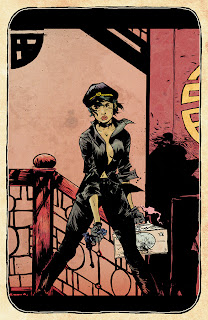 ONE TRICK RIP-OFF / DEEP-CUTS HC
story / art / cover Paul Pope
288 Pages / FC / $29.99 US
Young lovers Tubby and Vim want to escape – escape the mistakes they've made, the lives they've lived, and the dirty city weighing them down. Their plan is simple –all they have to do is rip-off Tubby’s pals, the One Tricks – the toughest street gang in LA. If they pull it off, they're set for life. If not, their lives won't matter much anyway. What was going to be a smooth, straight-forward heist becomes a fast-paced battle to the death. This is presented for the first time in color by Jamie Grant (All-Star Superman). With over 150 pages of new, rare, and never before seen stories created during Pope’s time traveling the world in the ‘90s this is not to be missed.
Lee: Paul Pope is AWESOME. I am always up for reading his new (or old in this case) stuff.  He's one of those authors that I always seem to have to force myself to read, but once I am done with the book I always wonder why I waited so long.
Thomm: With all the extras, how much of the 288 pages is the story? It sounds very good, but if I think I’m getting a good story that only takes up half the book, I might be less inclined to dive into this. 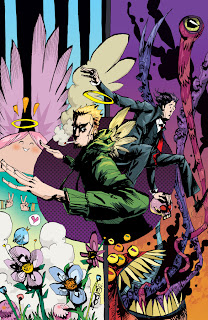 THE END TIMES OF BRAM & BEN 1 (of 4)
story James Asmus - Jim Festante
art Rem Broo cover Jim Mahfood
40 Pages / FC / $2.99
What would you do if you were caught in the Biblical End Times? When Heaven raptures total bastard Bram Carlson in a “clerical error” – he’s sent back and immediately uses Armageddon to his benefit! Can his anxious roommate Ben save Bram from himself – AND the gathering forces of Armageddon?
Extra-long debut issue! This apocalyptic buddy-comedy from writers James Asmus (Thief Of Thieves, Gambit) and Jim Festante is recommended for fans of Chew and Battle Pope.
Thomm: Thief of Thieves is good enough that I’ll check this out. Besides, I love a guy who gets sent back from Heaven knowing what’s going on with the end times and decides to flaunt it in Heaven’s face. Of course, the philosophical question of whether Heaven, agent of an all knowing and perfect deity, can make a clerical error, too.
Lee:  I'm always up for a good buddy comedy.  Add a hint of Heaven and Heck and this looks like it could be a winner. 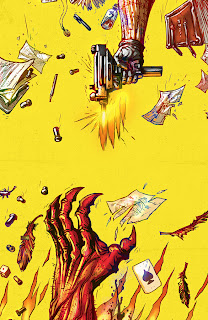 REPOSSESSED #1 (of 4)
story / art / cover JM Ringuet
32 Pages / FC / $2.99
In a world where Demon possessions are commonplace it’s up to a crew of overworked blue-collar repo guys to repossess the victims with old grimoires and big guns. The Dee Agency is hired by a rich NYC banker to repossess his daughter Sarah who ran away to Vegas. But the job is tougher than they expected and Demons of all sorts start popping up on the trail.
Thomm: Image is on something of a theme here. Ringuet’s a good talent, so I’d check this out even though the premise isn’t entirely enticing.
Lee:  Ringuet is an old friend of the blog so we will always pick his books... no matter how dull they may appear.  That sounds bad... because this looks like a great idea.  Don't listen to Thomm, it's a good idea and it will be well done so get the first issue and decide I'm more right than Thomm. 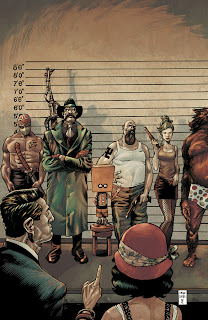 TODD, THE UGLIEST KID ON EARTH #1 (of 4)
story Ken Kristensen
art / cover M.K. Perker
32 Pages / FC / $2.99
This series, a collision of comedy, sex, and violence, follows the misadventures of America's most dysfunctional family as they go head-to-severed head with an Oprah-loving ax murderer, a cult-crazy soap opera star, and a neo-Nazi prison gang.
First issue: Todd wants desperately to make friends, but every kid he approaches winds up decapitated. Or worse. Meanwhile, Todd's mother is on a mission to get even with her husband who she believes is having an affair.
Thomm: Well, this is just strange. Strange in a good, entertaining kind of way. Perker’s art is very good, too. I don’t know what’s so strange about a neo-Nazi prison gang, though. Plenty of those actually exist. Oprah-loving ax murderers, too.
Lee:  That hype is too darn weird not to love it.  I am soooo sold on this if only because I really have no idea what to expect.  And that happens so rarely these days I can't miss a chance to be surprised. 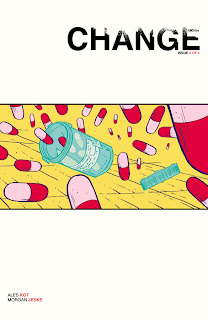 CHANGE #2 (of 4)
story Ales Kot
art / cover Morgan Jeske
32 Pages / FC / $2.99
Have you ever lost someone? What if the city you lived in your entire life, the city you loved with all of your soul, the city you were inextricably connected to – what if that city was about to die, and you were the only one who could possibly keep it alive? Sonia and W-2 will do all it takes – but the horrors tear through the walls of reality to get at them.   Dreams are crushed. New facts appear. Old alliances fall apart.
Lee: Interesting, saving a city? It’s a bold enough concept to make it worth checking out.  I have to say I like the cover too.  I know I complain about the generic superhero covers that provide no indication what's inside the book, and this certainly falls into that catagory.  But the fact that it appears to have even less than nothing to do with the story somehow makes it appealing.  Or it could be the pop-art nature of it.
Thomm: Why is Sonia’s sidekick a tax form? How literal is this on keeping a city alive? Cleveland’s been dead a long time but people still live there. 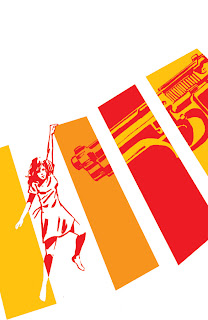 COMEBACK #3 (of 5)
story Ed Brisson
art / cover Michael Walsh
32 Pages / FC / $3.50
Mark Thomas has lost Kelly, the woman he's been sent back in time to rescue. His partner Seth is MIA and his boss is demanding that Mark hunt down and kill an FBI agent in order to save RECONNECT, their illegal time travel operation.
Lee: You have to love the phrase “illegal time travel operation” This has potential too.
Thomm: If it’s an illegal operation why does it have a name that sounds like just what it does? Isn’t that a giveaway to the authorities? 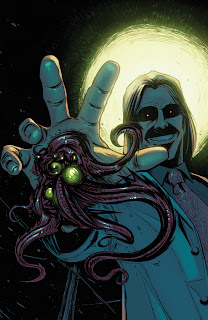 THE DARKNESS #111
story David Hine
art / cover Jeremy Haun
32 Pages / FC / $2.99
Jackie crafted the world as he saw fit. For the longest time, nobody noticed. As master of the shadows, he knows that he must operate outside of the spotlight if he wants to get what he truly wants. But there are those who know the unbalance Jackie caused. Witchblade bearer Sara Pezzini knows what Jackie stole from her and the time has come for her to make Jackie pay.
Lee: The Darkness as a concept bores me. But David Hine is a great writer. Jeremy Haun is a really good artist. If any team can make it work it’s this one. Add a great cover which has DC’s The Shade vibe and I can take a winger on this issue.
Thomm: Let me know how that goes. I’ve read one, maybe two issues of The Darkness and wasn’t at all thrilled or interested.

Thomm: Lots of the mystic this month. Makes Invincible’s big celebration almost seem pedestrian. Invincible’s still my best bet, though.
Lee:  What a great month.  Invincible will be good but there's so many other books that I am willing to bet will be better.
Posted by Lee at Friday, November 23, 2012