I figured this was a gimme post.  All I had to do was find a couple of covers that were Thanksgiving themed and I was done.  WOW!  Was I ever wrong.  Christmas cover, easy peasy.  Holiday covers... which are all Christmas covers.  Even easier.  But Thanksgiving... not so much.  I searched on Thanksgiving and came up with... NADA.  Nothing.  Which forced me to use other common Thanksgiving words.  Wait until you see how well I did.

I starte with Turkey and ended up with... 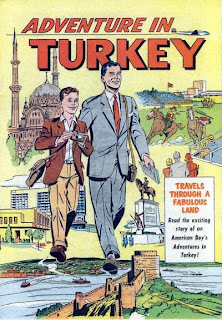 Adventures in Turkey, 1953
Ummm yeah.  Remind me of a line in a movie, "Son have you ever been in a Turkish prison?"


It only gets better.  See below the break. 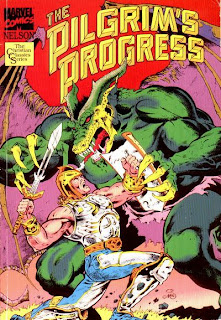 So Turkey was a no go.  I then went to Pilgrim and found...
Pilgrim's Progess, December 1992
Pencils: Seppo Makinen
Inks: Seppo Makinen
As part of Marvel's "The Christan Classics Series" we have this book.  WHAT THE HECK???? I thought I had seen ever single Marvel book published in the early 90's.  It was the peak of my collecting, I was in the local shop ever day... how did I miss this?

And I may not know alot of the book "Pilgrim's Progress" but I am pretty sure it was nothing like the cover implies. 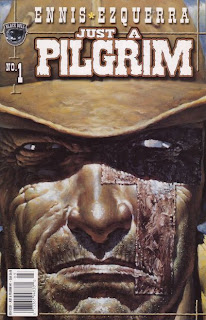 Just A Pilgrim, May 2001
Pencils: Mark Texeira
Inks: Mark Texeira
Which lead me to this book written by Garth Ennis.  Oh yeah, this has nothing to do with Thanksgiving. 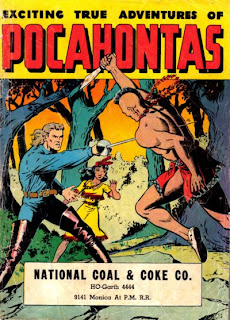 Ok let's move onto another word.  How about Pocahontas?
Exciting True Adventures Of Pocahontas, 1942
I know, I know Pocahontas has nothing to do with Thanksgiving but after the success I had with Pilgrim I was worried about what I would find.

Although, I am not sure a comic produced by the National Coal and Coke Co. could be classified as better. 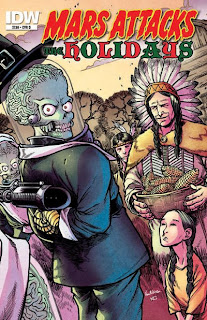 Mars Attacks the Holidays, 2012
Sadly, the best I did was this.  Aliens blowing up Indians.  Ya gotta love the comics.

Well, I hope everyone had a great Thanksgiving.  Now go watch some football.
Posted by Lee at Sunday, November 25, 2012